It's all Molly Hooper gets to do. 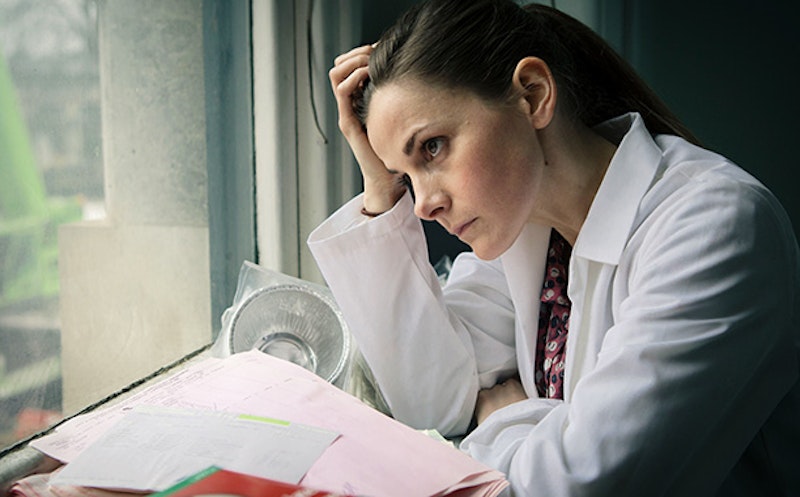 Sherlock's Molly Hooper is a strong female character—which is exactly the problem. Hooper, played by the marvelous Louise Brealey, is a sweetly nerdy coroner, unfazed by grotesque corpses or life-threatening contretemps. In "The Reichenbach Fall," the last episode of the second season, it's Molly who Benedict Cumberbatch's Sherlock turns to in order to fake his own death and foil the evil Moriarty. When Sherlock falls into the clutches of his addiction, it's Molly who tightens her jaw, slaps him across the face hard, and tells him he has to pull himself together. She's shy and quiet, but she's tough. She's nerdy cool. She's great.

And her emotional life is entirely defined by her tragic unrequited love for Sherlock.

The first time we see her in season 1, episode 1, she asks Sherlock if he'd like to get some coffee—and he responds that yes, she should get him one. She rolls with it, but you can see her heart break. And then you see her heart break again. And again. She's a strong, brave, resourceful, determined woman working in a traditionally male field and excelling. But her only purpose on the show is to moon after the (more stereotypical, less interesting) male genius title character.

The last episode of the fourth season takes the Molly mooning trope to an offensive extreme. The plot is too convoluted and preposterous to sketch at length, but in short Sherlock's forgotten evil sister Euros says she has wired Molly's house to explode unless Sherlock can call her on the phone and get her to say, "I love you" within three minutes (if he tells her that her life is in danger, Euros says she'll set off the bombs).

Molly, who has already had a terrible day for unspecified reasons, isn’t interested in playing what she sees as one of Sherlock's stupid games. But he nonetheless gets her to gasp out the painful words, in part by telling her, with sincerity they both know is false, that he loves her. After the call, with Molly safe, Sherlock breaks down, smashing furniture and yelling and thrashing as the camera does some jump cuts to demonstrate the emotional intensity. We don't see Molly's reaction, because who cares about Molly's reaction? Showrunner Steven Moffat contrived a preposterous scenario to torture her for the sole purpose of providing Sherlock with an excuse to emote.

Molly is a variation on what critic Tasha Robinson refers to as Trinity Syndrome, named after the character Trinity in The Matrix. Robinson describes Trinity Syndrome as "the hugely capable woman who never once becomes as independent, significant, and exciting as she is in her introductory scene." The Trinity Syndrome victim is a badass woman whose competence exists solely as a foil to highlight the fact that the main male character is even more transcendently competent. How could he be anything else when the competent awesome woman defers to him?

Molly isn't ever presented as ultra competent like Trinity; Sherlock’s the smart superhero. But she's winning and worthwhile, and her life is lived completely in his shadow. She's only onscreen to help Sherlock, or provides him with material for angst.

Following the episode angry fans yelled at Louise Brealey, the actress who plays Molly, because the Internet is awful and people don't quite understand that writers, not actors, are responsible for how characters are written. Brealey responded to her critics, by noting sharply, and incisively, "Loving someone after years is not reductive, retrograde, antifeminist or weak."

She's right; there's nothing un-feminist about being in love, and there are famous female characters who have long unrequited or unhappy loves—Lucy Snowe in Villette, for example, or Trollope's Lily Dale. The problem isn't that Molly loves without the love being reciprocated. It’s that the show only cares about her love, not about her. She’s there to pine. Even when she gets engaged, it's to a guy who looks like Sherlock. She’s all about him.

Of course, the show is named Sherlock. He's the main character. But Watson gets character traits (such as a love of danger, or a commitment to saving human life) that don't refer solely to the main detective. Molly, though, simply stands slightly to the side, modeling the awe and love we're all supposed to feel for Moffat's title creation. That's what women are supposed to do, apparently, no matter how strong they are.