The Way Back is fine, but there's nothing in it we haven't seen or heard before. B 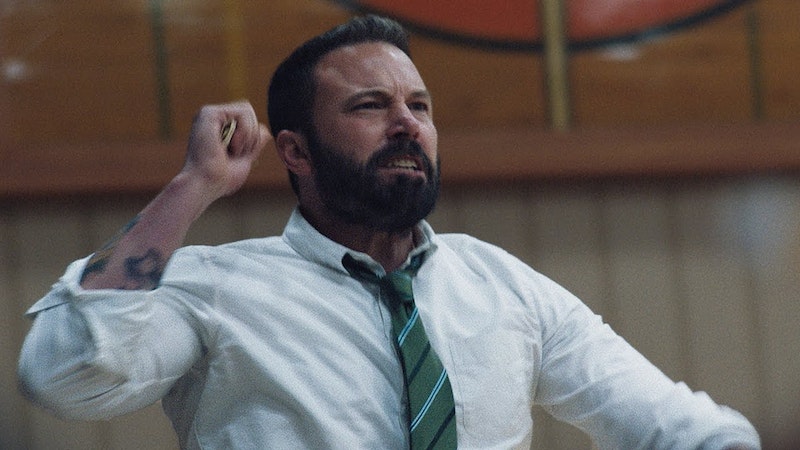 The Way Back is one of those tests to see if the positive elements of a film can overcome clichés. It's a well-made, well-directed film, and features one of Ben Affleck's better performances. However, there's practically nothing here that we haven't seen in movies many times before.

The film reunites Affleck with director Gavin O'Connor, who after delivering standout entertainments like Miracle and Warrior made 2016's The Accountant, a truly bonkers movie that starred Affleck as a man on the autism spectrum who’s also a professional killer.

The Accountant was unconventional, but The Way Back goes the other way, bathing in well-worn cinematic chestnuts. It lifts one chunk of ideas from Manchester by the Sea—which starred Affleck's brother Casey—and another from Hoosiers, byt with Gene Hackman and Dennis Hopper's coaches merged into one character. There's also a hint of Tom Hanks' Jimmy Dugan in A League of Their Own, as a star athlete-turned-fall-down-drunk who earns redemption through coaching.

Set in a small town of interminable geography, The Way Back stars Affleck as Jack Cunningham, a former high school basketball phenom who's now a sporadically employed sad drunk, and the sort of guy who can't even get through a morning shower without cracking open a beer. Out of nowhere, he's offered a job coaching his old Catholic high school's basketball team, which hasn't had a winning season since he played 25 years ago.

The basketball part is something you've seen in Hoosiers, Coach Carter, and numerous other high school basketball movies. Jack inspires a ragtag underdog team, although about all we see him do is encourage hard fouls and yell and curse a lot. It’s an amusing running joke, though, that the team's chaplain has to keep pushing him, unsuccessfully, to reign in the f-bombs.

As for the basketball team, none of them really emerge as fully-drawn characters, although Daily Show alum Al Madrigal has some decent scenes as the team's assistant coach. Meanwhile, just like Manchester, information about the various tragedies in Jack’s past is slowly revealed.

What makes The Way Back worthwhile are O'Connor's assured direction, which finds unconventional ways to film basketball, and a performance from Affleck that's a long way from his sleepwalking turns as Batman. The actor gives a committed performance, even if it's not quite up to the work his brother did, in a similar part in Manchester.

Affleck's career has waxed and waned so much over the last 25 years that he's already on at least his third comeback. The Way Back represents an official and triumphant kickoff of the Middle-Aged Man phase of his career. The supporting cast is also strong, including the SNLer-turned-character actress Michaela Watkins as Affleck's sister and Janina Gavankar, familiar to fans of The League as Shiva, as his ex-wife.

There are some plausibility questions, however. The film’s set in a world in which a school would, with zero due diligence, hire a hardcore alcoholic to work with children. I just submitted to four separate background checks to coach Little League this spring. And why couldn't they set Affleck up with a radio, so he can listen to the game from rehab? They did that for Dennis Hopper in Hoosiers, and that movie was set in the 1950s.