Modern-day priests and the basic human equation in The Dark Past (1948). 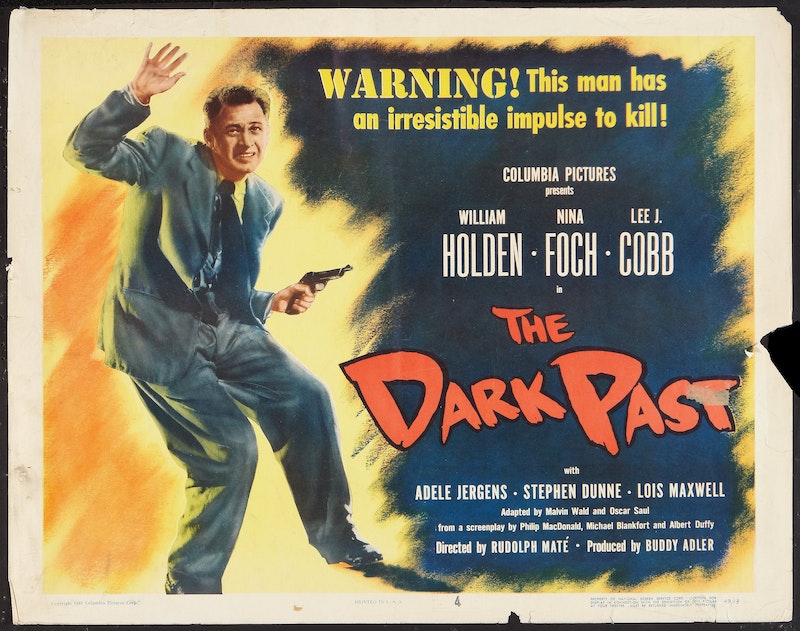 The supposed Golden Age of Hollywood was just as awash in remakes, adaptations, and sequels as the present day. Thus The Dark Past, Rudolph Maté’s 1948 remake of the 1939 play adaptation Blind Alley. Both movies are part of the Criterion Channel’s “Frame of Mind” collection, and show that nine years had brought interesting differences in film technique and in the presentation of psychiatry.

Character names are different, but the story’s roughly the same. A professor of psychiatry, his wife, and guests at his lakeside cottage, are taken prisoner one evening by a gangster on the lam who’s waiting to rendezvous with a getaway boat. After the gangster shoots a friend of the professor, the psychiatrist decides to destroy the criminal mentally.

The Dark Past has a script by Malvin Wald and Oscar Saul that keeps the same structure as Blind Alley; many of the scenes play out similarly, and while dialogue’s overall better some stretches remain unchanged. But a few alterations create a different feeling. Starting with the acting: Lee J. Cobb as Doctor Andrew Collins is more interesting than Ralph Bellamy in the original, raising his voice and letting his temper fray. William Holden as the criminal Al Walker is excellent, driven, callous and threatening; he and Collins have a more even duel, a back-and-forth that’s less predictable with higher stakes.

There’s not the same insistence on Collins’ analysis of Walker’s dream destroying the gangster’s basic ability with violence—here the implication is that he freezes, and that’s enough. There’s more realism in the result of the analysis, just as there is in the dialogue that leads there.

Visually, compositions are more interesting and less stagy, the lighting higher in contrast and more dramatic. The architecture of the cottage is more open and interesting to look at, a stairway ascending through the largest room presenting a striking diagonal design element.

The book-lined nook where the professor had his desk in Blind Alley is eliminated. There’s still a few volumes, including one on criminal insanity to which Collins directs Walker’s attention (instead of the gangster being drawn to it on his own), but now there’s a dart board hanging over the desk that becomes the focus for a brief competition between Collins and Walker. That doesn’t quite come off; Collins is given an improbable skill, and Walker wonders why Collins doesn’t attack him with the darts forgetting that he’s got men upstairs keeping a gun on Collins’ wife. But a bit of business with a chessboard is more interesting, an expansion of an idea in the Blind Alley script that works better here. Holden’s in a black suit, Cobb a light one, so the chessmen are an elegant visual reflection of the verbal game the two men play.

Secondary characters are given less screen time, which helps. Berry Kroeger’s fun to watch as a grinning gunman, but Nina Foch’s not especially interesting as Walker’s moll, and the guests of the professor are no more involving here than they were in Blind Alley.

Except for the guest the gangster shoots. In the original he was a student, but The Dark Past makes him an older colleague of Collins, a father figure and not a surrogate son. In this case the reason for coming is a little different, too, returning a shotgun to Collins. Walker takes the gun, and later, thanks to Collins, he’s unable to shoot it at the cops. Walker’s violence stems from conflict with and betrayal of his father, a theme emphasized by the change: he takes the Freudian gun away from Collins’ symbolic father, then Collins makes him unable to use the weapon for violence.

Bearing this in mind, it’s notable that the psychiatrist in Bind Alley had a young son but Collins doesn’t. With the change in his visitor, he doesn’t have a surrogate son either. He’s therefore necessarily less of a patriarch.

And the movie’s framing sequence is interesting. It’s not especially well done—the voice-over narration in the opening is too bland, the closing of the frame too abrupt and simple. But it’s a new structural device, in which we follow Collins in to work at a municipal police department as a forensic psychiatrist, see him take an interest in a young criminal, and see him argue to a cop that with proper intervention the criminal could be turned from a life of crime. Collins then tells the story of his analysis of Walker to illustrate his point, claiming that if Walker could’ve been analyzed as a child he could’ve been rehabilitated.

It makes some sense that Collins would believe that, but there’s no reason for him to be drawn to the young crook. He imagines a background for the youth, and declares, “He’s a sick boy, mentally and emotionally” without knowing anything about his life. Why is Collins so convinced the man can be saved? Maybe because symbolically he’s looking for a son. If so, there’s some pathos: he’s turning to his psychiatric powers to provide him with a son because that’s what works, that’s what he unconsciously views as the source of his authority.

“There, with very little difference in the basic human equation, goes any one of us, or our kids,” Collins declares at the end. That’s a wordy way of saying “there but for the grace of God,” but the imagery’s suggestive: the human equation, not God. As a psychiatrist, Collins is still in the role of a modern-day priest. He’s still a man who can reach into another man’s psyche and turn him inside out, for good or ill. But he’s also a man like other men, who’s fallible, who can be pushed to lose his temper, and who tells himself stories without knowing why.