The 10 best movies of the year in streaming. 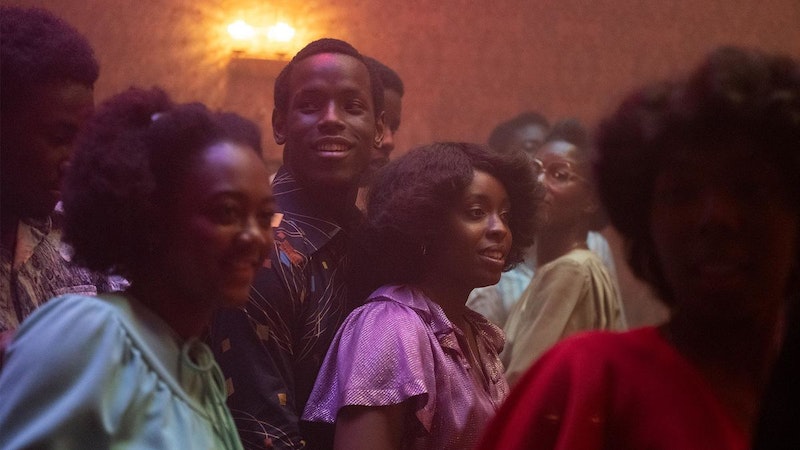 1) Lovers Rock. Director Steve McQueen's Small Axe series hit its peak with this film, depicting a dance party among a group of West Indian immigrants in London in 1980. There are some character moments, and a love story too, but the singing and dancing is the best part, leading up to the movie year's most magical moment, a cappella sing-a-long to Janet Kay's "Silly Games." It was a movie about togetherness and joy, in a year with too little of either.

2) The Trial of the Chicago 7. There's Good Sorkin and Bad Sorkin, but this film, written and directed by The West Wing creator, offered most of his good points and few of the bad. Telling an important story from counterculture/Boomer history, Sorkin filled his cast with good choices, and structured the film to deliver satisfying payoffs.

3) Onward. Directed by Dan Scanlon, Pixar Animation Studios' spring film, released at the start of the pandemic and shunted to Disney+ the following month. The film had a gimmick involving magic in the modern world, but it was valuable as a moving story of brotherly love, much the same way the Frozen movies subverted genre tropes to focus on a sisterly bond.

4) The Vast of Night. The year's best debut came from director Andrew Patterson, who funded the film in part by working as an employee for the NBA's Oklahoma City Thunder. It's a Lynchian visit to the 1950s, as visions of Americana are underlaid with a scene of foreboding and terror. The style, meanwhile, toggles between showy long takes and indoor dialogue scenes. The year's revival of drive-in theaters had its pluses and minuses, but no movie was more perfect for the format than this one.

5) Bloody Nose, Empty Pockets. This isn’t really a documentary. The movie by Turner and Bill Ross purports to depict the final night of a Las Vegas bar that's about to go out of business, and the barflies who frequent the place coming to terms with its end. It was really filmed in New Orleans, and the cast members were recruited from similar bars around the country. But I've been to similar Vegas bars, and depiction is accurate.

6) Time. The year's best documentary, from the filmmaker Garrett Bradley, is one of many this year about crime, race, and criminal justice reform, but it's the best. It finds a fascinating protagonist in Sibil Fox Richardson (known as Fox Rich), and her quest to get her husband released from prison for a years-ago bank robbery. The film combines home movie footage with present-day depictions of the quest, and no film this year ended with a more satisfying catharsis.

7) Nomadland. Chloé Zhao's film, starring Frances McDormand, David Strathairn and a group of non-professional actors, explores the world of "nomads," older Americans who’ve taken up a lifestyle that entails traveling around in campers, often after the collapse of their hometowns. Beautifully photographed by Joshua James Richards and wonderfully acted by McDormand and the rest of the cast, Nomadland is a fantastic look at a little-known subculture.

8) I'm Thinking of Ending Things. Charlie Kaufman's first film in five years delivered the weirdness we've come to expect from the writer of Eternal Sunshine of the Spotless Mind and Being John Malkovich, and the director of Anomalisa. But this film took things up a notch, often switching among different levels of reality over the course of a single scene. Jessie Buckley, the Irish actress from the most recent season of Fargo, is a revelation here as the protagonist.

9) Never Rarely Sometimes Always. Director Eliza Hittman's film is an "abortion drama" that's not didactic or preachy, but instead focuses on its characters, played by Sidney Flanigan and Talia Rider. Autumn (Flanigan) leaves her Pennsylvania hometown with her cousin (Rider) to procure an abortion in New York City. The film not only shines the light on a frequent occurrence, but conveys how nightmarish it is to spend a night in New York with no money and no place to stay.

10) Promising Young Woman. Emerald Fennell's pitch-black comedy is already dividing critics, and seems likely to set off major fights once it arrives at Christmas. It's a delightfully daring, risk-taking movie, which is by far the best treatment Hollywood has yet given to #MeToo, and also features a career-best performance by Carey Mulligan. She plays the titular woman, who left medical school years earlier under mysterious circumstances, and has a sophisticated plan for revenge that slowly emerges throughout the film.