A documentary about the film industry offers fresh perspectives on its hidden intentions. 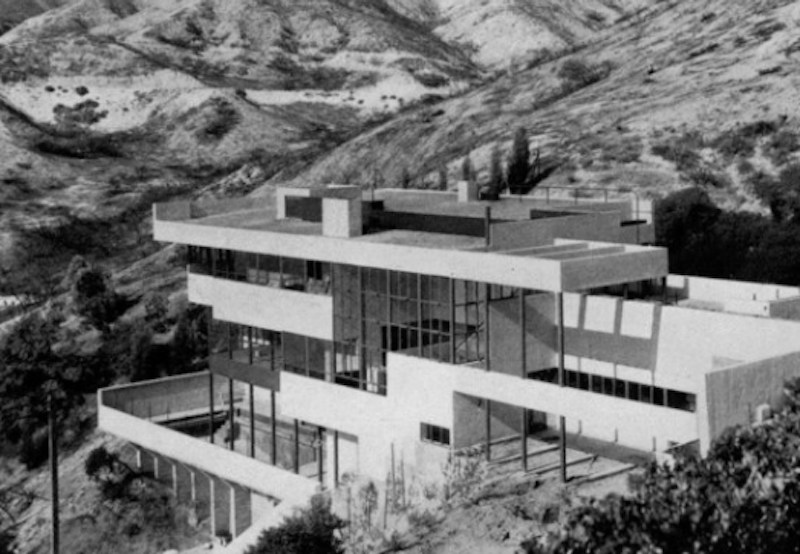 Thom Anderson, a scholar of film theory and history, is indignant. He has a bone to pick with Hollywood because he thinks the film industry has treated his hometown of Los Angeles shabbily. His documentary, Los Angeles Plays Itself, is an exercise in catharsis—an escape valve he opened to release years worth of pent-up frustration. It's a polemic—an attempt to set the record straight—lasting nearly three hours, but it glides rather than drags. You may balk at some of the director's mordant ruminations, but he won't bore you.

Anderson feels that Los Angeles has an inferiority complex, as evidenced by the diminutive—"L.A."—that's become the city's default name that he despises. He's so gung-ho about the town getting the respect it deserves that the abbreviation troubles him, as does Hollywood disrespecting it by imposing its own diminishing narrative upon the town, creating a misrepresentation of reality that unsuspecting moviegoers have long taken at face value.

That Anderson has a jaundiced view of Hollywood is telegraphed immediately by the sardonic, uninflected tone of the narrator's voice. That's film director/writer Encke King reading Anderson's narration, sounding more resigned and disgusted than angry. It sounds weird and monotonous at first—it's unlike any narration you've ever heard in a commercial film—but then it starts to make sense. King going the full 169 minutes in full-dudgeon mode would probably be exhausting. Anderson views his beloved city as a recurring film character, thus the film's title, but feels betrayed by the way Hollywood's portrayed that character for decades. Using well-chosen clips from about 230 movies, he provides a comprehensive analysis to support this contention.

Even if you've never been there, it's possible to feel you have a real sense of what Los Angeles is like after seeing it as the backdrop to countless films. But Los Angeles Plays Itself trains you to question your confidence that you "get" the city from the vantage point of your movie theater seat. The essence of Anderson's thesis is that Los Angeles is a diverse metropolis that "contains multitudes," but the film industry compresses it into something caricatured and incomplete with its slavish, cynical devotion to a handful of narratives that it peddles. He takes particular offense at the film industry's narrative of his hometown as a place rife with clandestine crime, as seen in such films as L.A. Confidential, Chinatown, and To Live And Die In L.A. When film noir (which Anderson's said he likes) defines a location, he believes too many stories get left out.

Curtis Hanson's L.A. Confidential is a film that Anderson finds particularly galling. Besides the theme of conspiratorial crime, it exhibits another of the director's pet peeves—Hollywood's enduring antipathy towards modernist residential architecture, which he believes is "one of the glories of the city." To the filmmaker's dismay, Hanson used Richard Neutra’s 1929 Lovell Health House, which the narrator calls "the first great manifestation of the International Style in southern California," as the residence of sleazeball character Pierce Patchett (David Strathairn). Anderson provides a number of other examples of Hollywood's most unsavory characters living in equally stunning modernist homes. All the decent monied film characters reside in conventional-looking mansions which communicate a desire for old-fashioned American luxury as opposed to a taste for a "decadent" cutting-edge style with a European feel to it.

"The architectural trophy house is the modern equivalent of the black hat," Encke King tells us. "It's nothing to take seriously." But then King informs us that the architecture critic of The Los Angeles Times did take it seriously, citing L.A. Confidential as evidence "that the utopian aspirations of modernist architecture were bogus." The critic wrote, "The house's slick meticulous form seemed the perfect frame for that kind of power. Neutra's glass walls open up to expose the dark sides of our lives. They suggest the erotic, the broken, the psychologically impure." That sounds like a parody of a hack critic's attempt to sound contrarian when you learn that the home was designed for the physician and naturopath Philip Lovell as, as Anderson puts it, "a kind of manifesto for natural living." The single modernist architect the director believes Hollywood lets off lightly is his least favorite one—Pierre Keonig, who designed Stahl House—because of "his knack for turning steel and glass cubes into Hollywood-Regency-style mini-mansions."

Bad guys living in his city's architectural treasures on the silver screen is a part of something Anderson loathes—Hollywood's fictive history of Los Angeles. This brings us to his problem with Chinatown, a revered film. Anderson rues the fact that Chinatown, which is pure fiction, is seen as docudrama—that it's become "a ruling metaphor for non-fictional critiques of Los Angeles development." This is part of a Hollywood pattern of, as the filmmaker sees it, replacing a "public history" with a "secret history." The narration informs us that, contrary to the story that screenwriter Robert Towne wrote, the Los Angeles aqueduct wasn't a con, and it was less destructive than water projects in New York and San Francisco. "Chinatown," the narration continues, "teaches that good intentions are futile. It's better not to act; even better not to know. Somehow this dark vision hasn't offended anybody. This is history written by the victors, but as usual it's written in crocodile tears."

There's a hint in that suggestion that Chinatown is rotten at its core that Anderson has made a political film with a proletarian point of view. The filmmaker believes that the only people who know the city are those who walk and/or ride the bus. Contrary to Joan Didion's observation, plenty of residents travel on foot, but how many have you ever seen on the screen? Hollywood doesn't see the proles as marketable, so the industry pushes them aside in favor of its "secret history," an alternative reality in which few black, Latino, or Asian faces are to be found. It's a parallel reality where everybody lives at the beach or in Beverly Hills, and most of them are in, or want to be in,''the industry.''

At his documentary's 10th anniversary screening in 2013, Anderson told the audience, “The way movies foreclose the possibility of emancipatory politics has not changed." The way Hollywood celebrates the one-percenters at the expense of the common man is a thread that weaves its way throughout this film. But Thom Anderson hasn’t created a ponderous piece of agitprop tailored for the exclusive enjoyment of a single political tribe. Los Angeles Plays Itself is as entertaining as it is thought-provoking, and in its remastered form, with all of its many film clips now in HD format, it also looks great. The filmmaker does sometimes let his ire slide into oversensitivity, however. "L.A." sounds kind of cool, after all, and Roman Polanski never claimed that Chinatown was anything but a story. But watch Los Angeles Plays Itself and then watch another film set in Los Angeles that you've already seen, but this time with fresh eyes. See if you can see what Anderson's complaining about.