Warning from Space and Sergeant York, both reissued in HD, look crisp but feel worlds away in their spirit of comradeship. 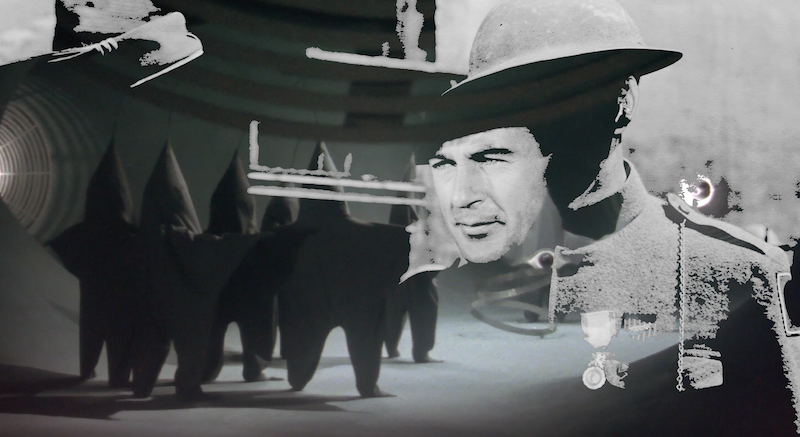 Would you fight for your country? Would you believe it if your government told you aliens were real? Would anyone do anything other than panic?

Warning from Space (recently reissued in an HD restoration by Arrow Video) was the first Japanese sci-fi film in color, released in January 1956 right after the massively successful Godzilla. Directed by Koji Shima, the film was panned upon release in Japan, a "bizarre," goofy attempt to cash-in on the monster phenomenon created by Godzilla. Stanley Kubrick liked it though, and likely saw it sometime around its American release in 1967, in the midst of making 2001: A Space Odyssey. (The American dub of the movie is included in Arrow's edition).

A decade after the atomic destruction of Hiroshima and Nagasaki, UFO’s begin to appear over Tokyo (the Japanese title is Uchûjin Tôkyô ni arawaru, or Spacemen Appear In Tokyo). Reaction at first is predictable: disbelief, confusion, denial. But they come in peace: these are aliens from Paira, a distant planet far beyond the scope of our observatories. They are cautious but they want to help us: there’s a massive planet “headed on a collision course” with Earth, and the Pairans want to save Earth.

After seeing the UFO’s as the Japanese do, we move into the Pairan spaceship for the most extraordinary scene in Warning from Space: half a dozen Pairans (actors in gray cloth outfits shaped like starfish with one eye) gather together and discuss their predicament in relative calm and quiet. A set of silver rings spins against the gray set, and a single light spins around and around as the softest beeps of the spaceship fill the room. The Pairans are confused: why do the humans react with horror and disgust when they encounter a Pairan? One of them asks, “Are we so hideous?"

Another Pairan summons a photo of a beautiful nightclub singer: “This is their conception of beauty? It has a large lump in the middle of its face.” The Pairans shrug their starfish-points and merge into a single form, the nightclub singer. When they arrive on Earth as one person, it doesn’t take long for others to catch on: the Pairan-Human tries to play a casual tennis match, but they can’t help jumping five feet in the air, or disappearing through walls. Soon though, the humans and the Pairans come to a desperate understanding, and ultimately Earth is saved when the humans finally agree to receive help from the Pairans. A whistleblower scientist is freed, and all is right in the kingdom.

Sergeant York, out now on Warner Archive, was wildly successful upon its release in July 1941, but today feels ancient. None of the filmmaking has been diminished with time, or the performances—Gary Cooper is an excellent Alvin York, and Howard Hawks (fifth choice for director) can’t miss in the 1940s—but the earnest plea for pacifists to enlist for war to defend their rights feels worlds away. Forget about combat: the United States government is going to have trouble administering COVID-19 vaccines to a not insignificant portion of the population.

Throughout Sergeant York (overlong at 134 minutes, like too many of Hawks’ films), we see Alvin York grow from a ne’er do-well drunk in the hills shooting his initials in trees and getting punished by his mother. Almost everyone in his town is illiterate and when Ma’s ultimatum comes down, York finds God. Walter Brennan plays the pastor that gives a fairly convincing argument not for religion, but for going to war despite being a religious person. Christian values give way to defending a way of American life, and it goes without saying that these are interchangeable, functionally indistinguishable. It’s okay to kill in the eyes of the Lord as long as you do it for love of your country and the people in it.

These are hoops we were once willing to jump through. No more. In 2020, and in 2021, no one will cooperate with strange aliens to save themselves, and no one will go to war against an enemy less clearly defined than Adolf Hitler. South American leaders just don’t cut it, and they never have—how well known is Augusto Pinochet compared to Hitler or Stalin or Mao? A ground war—even a drone war—has to be motivated by a sudden negative change in material circumstances. In the 1940s, it was “our duty” to fight, and men enlisted in droves before there was a draft. That sense of national duty has completely evaporated in the half century since the Vietnam War broke our “perfect streak,” as if such a vulgar expression could be applied to violent combat and genocide.

The real Alvin York bore a striking resemblance to Benedict Cumberbatch, but luckily the latter wasn’t alive when the former’s story was made famous months before the attack on Pearl Harbor. The new Warners Archive disc includes a few shorts: how to train big cats in Lions for Sale, a Tex Avery short called Porky’s Preview, and a 2006 documentary about York. Along with the film, these pieces of ephemera are striking in their visual clarity and their profound distance from the present. Like Warning from Space, Hawks’ film shows human folly and selfishness evaporating in the face of catastrophe. Even with a threat as present and visual as a rogue planet or the invasion of Europe by the Nazis, people needed convincing, but not much.

Considering the recent news of a “Galactic Federation” that only communicates with the United States and Israel, and the prospect of widespread rejection and indifference to various coronavirus vaccines, these films illustrate something that’s absent that the world desperately needs: solidarity. I’m not about to sing the Internationale, I mean solidarity between human beings, a love that includes all of mankind. What could possibly summon solidarity today?