The Prom No One Asked For

Marge, my friend, I haven’t learned a thing. F 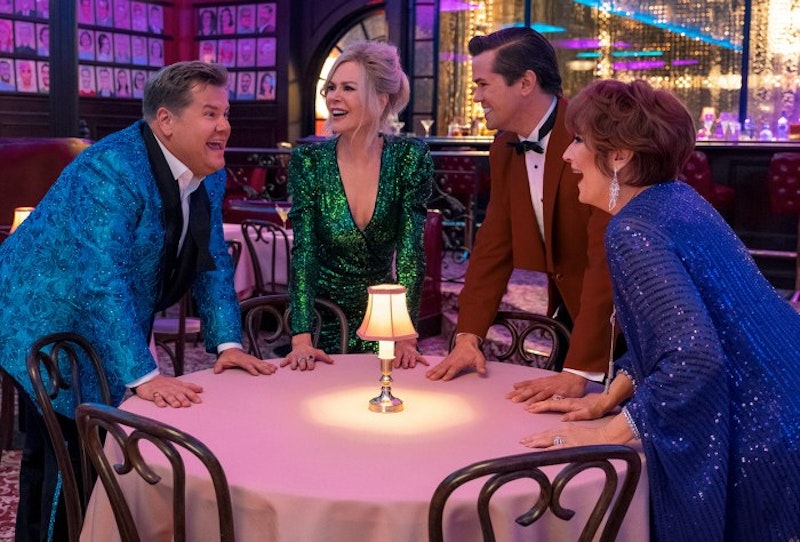 At the beginning of the year, director Ryan Murphy released his Netflix mini-series Hollywood depicting a fantasy version where the Red Scare never happened, McCarthy never reached the Senate and American cinema (the only cinema) was championed by a diverse gaggle of multicultural peoples, all of whom emerge with Academy Awards in the final episode. What more could you possibly want? Made as an obvious rebuke of Trump, the series was intended as an ode to all that was decent in a broken world and all that could be. At long last, what “could be” has come to pass. Dignity has been restored, racism is over and America is now ready to usher in a new era of prosperity, science and culture, as one particularly emphatic Twitter commentator informed me.

“Is Ryan Murphy’s musical the first film of the Biden era?” asks Peter Bradshaw in his review of The Prom: the first film Murphy has completed for Netflix. It’s a label I expect to become familiar with over the next couple of months. Well into 2019, critics were doling out the title of “first film of the Trump era” indiscriminately; desperate to understand where it all went wrong, or perhaps find some beacon around which the masses could weather the storm. Not to be outdone, though, Netflix is leading the charge on a new front. Donald Trump isn’t even out of office and we already have the first film of the Biden era just in time for Christmas.

It’s not hard to see why someone would come to this conclusion. The Prom feels like it was made in anticipation of a Biden presidency. It probably was. A big, glitzy musical about gay teenager Emma’s struggle to attend her school prom, aided by her principal and a coterie of Broadway actors who’ll preach humility to the hicks and maybe learn a little bit for themselves along the way. It’s about love triumphing over hate, bright colors, high-energy numbers and stars a cast of #Resistance celebrities headed by James Corden and Meryl Streep, who notoriously incurred the wrath of Trump during a speech at the Oscars, coming together to help bridge the gap between coastal elites and the silent majority, learning to love again in a time of hatred and division.

Predictably the film ends with a kiss between Emma and her heretofore-closeted girlfriend, Alyssa, together in public for the first time at a new and inclusive prom. A stream of LGBTQ+ people from other schools attend the event with their partners, eager to share in the fun. Even Alyssa’s homophobic mother—the one responsible for banning the prom no less—arrives a changed woman. It’s a cloyingly sentimental finale, complete with a triumphant victory lap in the name of tolerance and capital E-quality. Behavior that has been typical of the Democratic Party and their most ardent supporters in the wake of the election. Politicians and campaigners promising a quick, painless return to civility, singing and dancing all the way to the inauguration.

The NeverTrumpers were vindicated by a swinging mandate in favor of their chosen candidate. The few voices that sought to address the fractures inherent in America’s identity were drowned out by blind positivism and firm denial: a new wave dedicated not to nastiness, but goodness, perhaps best represented by David Ehrlich’s laughable coinage of “nicecore” cinema. “If nicecore continues to pay off,” he wrote, “blossoming from a trend (or think-piece neologism) into a genuine wave, perhaps we’ll even be able to help ourselves.” If we can just hug it out, the goodies will triumph in the end—or as Ehrlich’s personal hero Paddington Bear suggested: “If we’re kind and polite, the world will be alright!”

The political laziness of The Prom is matched only by its formal laziness. As someone who never saw the original musical, even I could tell how little effort had gone into adapting it. Character scenarios created for confined stage spaces barely fill the screen. Every scene is dressed up in a nauseating wash of gaudy primaries and neon lighting, but it does nothing to disguise how lifeless the tiny handful of endlessly recycled sets are. Corden, Streep and a miscast Nicole Kidman stumble their way through horrifically-composed numbers. Even trained performers like Andrew Rannells can do nothing with the material. It doesn’t help that he’s given the worst number in the film: a trudging paean clumsily elaborating the “true message” of the Bible, bookended by the endless repetition of “Love thy Neighbor,” a number so catchy I had to look it up before writing this review.

Nothing is challenged; nothing is changed. All we need is one final spineless rebuke of Trumpism told from yet another position of extreme privilege and everything will go back to normal. For all the lipservice corporate Democrats have paid to healing America, Murphy and co. don’t seem remotely eager to do any of that. The Prom makes some backhanded attempts to suggest the Broadway stars who come to Emma’s rescue would have an easier time of if they dialed down their egos, but even when we’re expected to believe that they’ve turned a new leaf, they never deign to understand the lives of the people they’re speaking down to. Even when Alyssa’s mother finally speaks to her daughter on her own terms, it’s all empty platitudes. She still has a lot to learn, and a lot to talk about as she states more than once, but honestly who has time for that shit when there’s dancing to be done? Let’s hit the fucking floor, people!