A Party You’ll Want to Miss 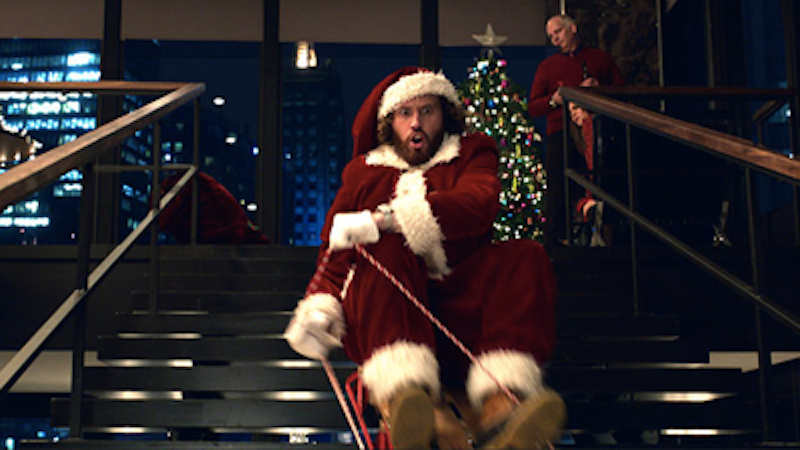 Office Christmas Party seems like a no-brainer: Take a whole bunch of talented comic performers and stick them into a high-energy, high-concept scenario, one that’s never been the topic of a movie before. Heading in it looked like a welcome respite from the Oscar bait of the season.

It’s not; Office Christmas Party is a clumsy, horribly-paced comedy with a poor understanding of its ostensible topics—office politics, parties and technology. Even worse, it wastes the talents of probably the year’s most star-studded comic cast.

The film is set at a company in downtown Chicago (they make “servers,” we’re told.) The branch is run by T.J. Miller, the idiot son of the company’s late founder, while his perpetually angry sister (Jennifer Aniston) is the new CEO. The nominal protagonist is recently divorced middle manager Jason Bateman, while other major roles include a genius coder (Olivia Munn) and the officious HR manager (Kate McKinnon.)

When Aniston threatens to shut down the branch, it’s up to the gang, led by Miller, to throw a wild, expensive Christmas party to impress a client (Courtney B. Vance) whose business would save the branch.

Office Christmas Party comes from directors Will Speck and Josh Gordon, who previously made a wildly underrated 2010 comedy The Switch, with Bateman and Aniston, as well as the fitfully funny Will Ferrell figuring skating comedy Blades of Glory. The two directors seem heavily inspired by the two Horrible Bosses films, borrowing actors and ideas liberally from both, but having a lot more in common with the second, less funny one.

That’s not all that’s unoriginal here. The primary conceit of the plot—T.J. Miller spends hundreds of thousands of dollars that the company doesn’t have on a lavish corporate party—was already the basis for a Silicon Valley episode, which was funnier and actually had consequences. And beyond that, while Miller plays a very similar character on that show, Silicon Valley understands that he’s pathetic. This movie asks us to root for him anyway.

Over and over, Office Christmas Party makes stupid moves that ring false. The movie is either set during a huge blizzard or it isn’t, depending on the particular needs of the plot. No company could “meet this year’s numbers” by firing a bunch of people in late December. And if an ATM tells you you’ve hit your withdrawal limit, you’re still at your limit if you go to a different ATM.

As for the party, having been to a few of these, companies throwing lavish parties to impress clients isn’t uncommon. But businesses throwing Animal House-style bacchanals in their own office, to win the business of exactly one client who may or may not be coming, is not.

And then, much like the second Horrible Bosses, Office Christmas Party briefly turns into a tense crime drama for much of the third act, complete with actions stunts. The movie also thinks it’s inherently hilarious for yuppies to walk nervously into a crime den (at least this time the criminals are Russian.)

But the film also fails at the character level. Bateman plays a put-upon office middle manager for about the 15th time in his career. Aniston, coming off the two Horrible Bosses movies, is on a later-day career run as a sexually aggressive boss figure, but her turn here feels warmed-over. She's one of three different female characters have “loosen up and don't be so uptight” as their primary character arc.

Munn is fine but seems to be visiting from a different movie. Rob Corddry shows up and does Rob Corddry things, while Jillian Bell as a pimp is funny for the first 30 seconds and then never again. McKinnon is very funny, but like several other characters in the film, she seemingly has a personality transplant over the course of it. There are about 20 more characters, taking up way more plots and subplots than the movie has time to service.

There’s one other thing: Office Christmas Party is set in Chicago. It goes to numerous recognizable downtown Chicago locations, and the skyline is in practically every other shot. It’s ostentatiously pitching itself as a Chicago comedy classic. Yet when I got to the closing credits, I saw… that familiar Georgia peach logo that was on roughly 40 percent of 2016 releases. Yes, the interiors were filmed almost entirely in Georgia.

Another movie this time last year, Tina Fey and Amy Poehler's Sisters, was a much better version of this same formula of sticking an all-star cast of comedians in a formal scenario. Office Christmas Party is less fun than it ought to be.

Here’s a wildly assured, confident debut film, made by people in front of and behind the camera whom you’ve likely never heard of, but one of the most visually stunning films of the year.

Written and directed by Anna Biller, The Love Witch was filmed in 35mm Technicolor and looks like it was made in 1968. It’s been a huge year for films—La La Land, Cafe Society, The Nice Guys, Rules Don’t Apply—depicting either a bygone version of L.A. or a modern-day one that looks like it; The Love Witch is right up there.

Samantha Robinson stars as Elaine, a witch in present-day Los Angeles who puts a succession of men under her spell. The film, from an avowed feminist filmmaker, has a lot to say about sex, dating and gender in today’s world. But this is no lecture—it’s exciting throughout, and has something of a Twin Peaks vibe. I’m looking forward to whatever Anna Biller and Samantha Robinson do next.