Black Mass is a sad and thoughtful tragedy. 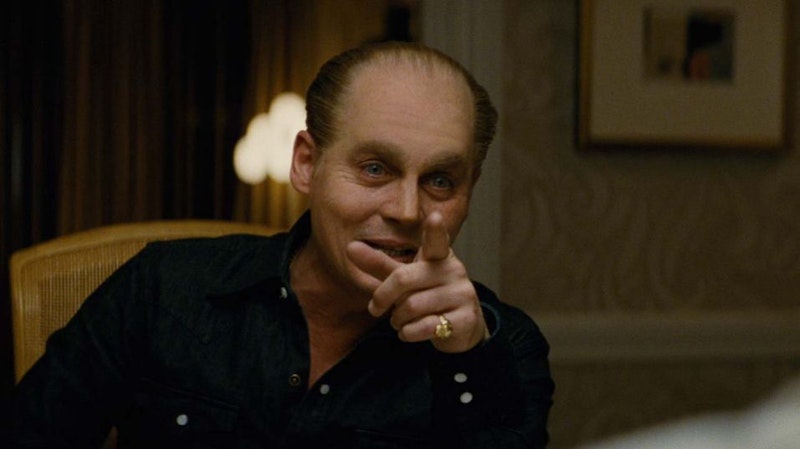 Johnny Depp might be getting nutty, but as long as he keeps acting in movies like Black Mass, who cares if he’s seeing imaginary chupacabras and fighting actual legal battles against the government of Australia? Depp sinks into the skin of James “Whitey” Bulger, with a permanent scowl and a rigid posture, perpetually constipated. His face looks like gray leather, 30 years older than it is, rotting teeth, and huge, bug-eyed shades. The Gawker article above dismisses the film as The Departed 2, but Black Mass distinguishes itself among an abundance of mob movies and crime thrillers full of headshots, bodies buried by the river, and crippling paranoia. Black Mass has a body count, but it’s not a thriller at all, it’s a low-boil tragedy told at a distance with an indifference to the violence and evil that plays out. The film is beautifully shot and stacked with fantastic actors who all manage to pull off the South Boston accent without embarrassing themselves. I never thought Benedict Cumberbatch could sound like anyone but a patrician, but he nails his performance as Billy Bulger, the State Senator who turned a blind eye to his brother’s business and eventually resigned in disgrace.

When Whitey Bulger was arrested in 2011 after years on the lam, the press emphasized his body count and the scope of his sadism. Black Mass is surprisingly intimate and spare—it’s not particularly tense, even as Bulger’s association with the FBI as an informant goes on and the agents associated with him become corrupt. The whole thing is just really sad—a bunch of relatives and hangers-on drawn into the orbit of a bitter man who dove deeper into organized crime after the death of his young son. It leaves out a lot of the brutal and gory details in the book, and instead focuses on these people slowly losing their grip on reality over decades, with the FBI caught in a horrible and embarrassing agreement with Bulger, who goes on killing and stealing while ratting out anyone above him, even taking pleasure in minor threats like Peter Sarsgaard.

Sarsgaard is one of my favorite actors, and carries the Philip Seymour Hoffman mantle of bringing to life viscerally repulsive creeps and losers and automatically elevating anything he appears in. Here, he plays a strung-out cokehead first shown shooting two people point blank in the head in a crowded Chinese restaurant. He’s unlucky enough to run into Bulger in Florida, and through some crime calculus, ends up with a gym bag full of $20,000 given to him by Bulger to deflect. Sarsgaard goes into the FBI’s offices to attempt an immunity deal, squealing on team player Bulger and failing to keep it together when the agents in Bulger’s pocket basically tell him to fuck off. His face is pure pain, his eyes blood red, crying, weeping, and begging to be put into witness protection. Of course, when Bulger quickly kills him thereafter, he leaves this life shrieking like a baby, his Member’s Only jacket splattered in brain matter. Unlike so many other Godfather or Scarface copies, Black Mass offers no thrill or indulgence in the underworld, and it doesn’t depict it like the hell it is—it’s a stark indifference, a vague sadness that hangs over the whole thing.