My Night With a Tarantino Crime Boss 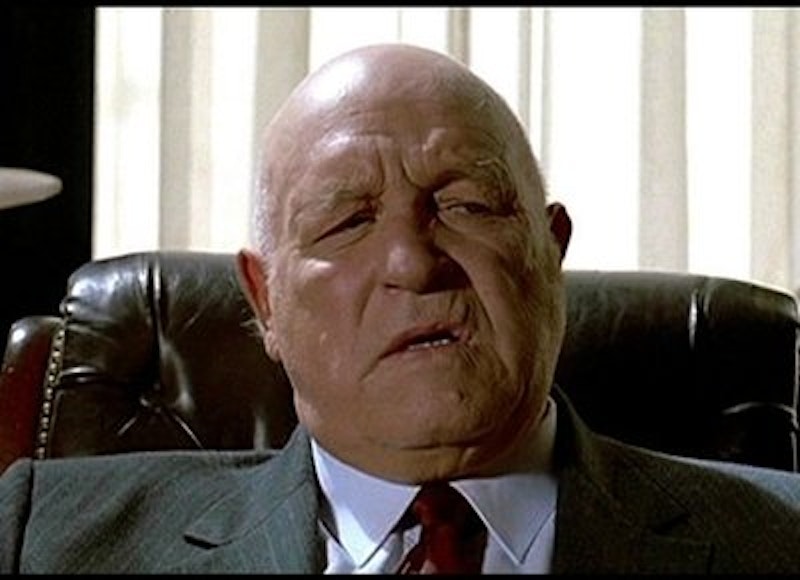 In 1991, my mom was working as a production coordinator on a low-budget movie shot largely in downtown Los Angeles. Midway through production, she called to tell me about the young director who was intoxicating the entire crew with his boundless energy and enthusiasm. “He’s reminding everybody why we got into movies,” she said.

The film was Reservoir Dogs and the director was Quentin Tarantino.

In those days I was a struggling screenwriter. My mom befriended Tarantino’s manager Cathryn James and arranged for us to have lunch. We hit it off and a year later I was invited to a Christmas party at her Studio City home.

I attended the party alone. Most of the guests were young, white male screenwriters either managed by or courted by Cathryn. They all knew each other and as they nursed wine spritzers they talked about their latest screenplays. One guy wrote a script called Monkey Boy about a half-man half-monkey hybrid born after a gorilla rapes a female zookeeper. Another described his sci-fi Noah’s Ark script where an interplanetary ark crashes on earth and repopulates the planet with alien beasts.

Soon, a buzz filled the room. “Quentin’s here,” one of the screenwriters yelled. The front door opened and Tarantino appeared. He hugged Cathryn, grabbed a beer and joined the crowd of screenwriters. The scribes surrounded Tarantino and patted his back as if he were a returning war hero. I stared at Tarantino, transfixed by his massive head and protruding chin. He was a ball of energy, his arms gesticulating and body bobbing like a boxer slipping punches.

“Check it out, Quentin,” one of the screenwriters said. He handed Tarantino a Superman comic book. The cover read “The Death of Superman.”

“Cool,” Tarantino replied, and thumbed through the comic book while his acolytes craned their necks for a better view. Realizing I didn’t feel the proper reverence for Superman’s untimely death, I went in search of a wine spritzer. As I approached the appetizer table, I noticed a thick elderly man leaning against the living room wall. He was balding, his face was weathered and he had a scowl as if he’d bitten into something sour. I suddenly realized the man was Lawrence Tierney who played mob boss Joe Cabot in Reservoir Dogs. I stepped forward and told Tierney how much I enjoyed his performance in the film. “You’re very powerful on screen,” I said. “I hope this is a new beginning to your career."

“New beginning,” he replied as if offended. “I’ve been acting since before you came out of your mother’s asshole.” I instinctively took a step backwards. This man seemed dangerous.

“You drive here,” he asked with his gravelly voice.

“How long you staying?”

“How’d you like to give me a ride home?”

“That fruitcake over there.” Tierney pointed to one of the young screenwriters. “He ain’t leaving till Quentin’s gone. They all think he’s Jesus Christ.”

“I’m happy to give you a ride,” I said. Tierney munched on pretzels while I sipped a wine spritzer. Neither of us spoke for a few minutes. “Ready to leave,” I asked.

We exited the house and walked down the tree-lined street. Tierney lumbered and breathed heavily. He seemed to be in poor health. “Wait here. I’ll get the car,” I said. My vehicle was a beat-up convertible Renault with the top permanently down. The seats were speckled with bird droppings and they were wet from the recent winter rains. I pulled the car to the curb for Tierney.

“What kinda piece of crap this,” he growled.

We drove south on Laurel Canyon toward Hollywood. Halfway down the Canyon he asked me to put the top up since he was cold. “The motor’s not working,” I told him.

“You fucking with me,” he asked.

“Put the damn heater on.”

“It’s not working either.”

“What the hell is wrong with you?

“There’s a jacket in the trunk.”

He guided me to Norm’s Coffee Shop on La Cienega near Melrose. We parked in back and found a booth near the window. A red-haired waitress appeared and poured Tierney a cup of coffee.

“How you doing, Larry,” she asked.

“Yeah. One for him too.” He pointed at me with his thumb. The waitress disappeared and Tierney sipped his coffee. Black. “You got money, right,” he asked me.

The waitress returned with two heaping pieces of Dutch apple pie topped with vanilla ice cream. “Get him some coffee to go with his pie,” Tierney barked at the waitress. I realized I was living a scene from a Tarantino movie. At least a David Lynch film. Two college-aged guys stared at us from a nearby booth. One of the guy’s lips mouthed “Tarantino” then I heard the other guy say, “Mister Pink.” They were looking at me and laughing. “Eat your pie,” Tierney demanded. I shoved a piece of pie into my mouth.

“And the ice cream.” I followed up with a large spoonful of ice cream. Immediately I felt the oncoming pain of an ice-cream headache. I put my hand to my forehead and moaned. I held my breath until the pain subsided.

“Why don’t you do something good for the world? Check people’s teeth for cavities or spray houses for bugs. Why you gotta waste your time writing movies. Ain’t there enough crap out there already?”

“Why did you want to be an actor,” I asked him.

“…No maybes. Either you’re a writer or you’re not a writer. And let me tell you something. Screenwriters are not writers. Don’t kid yourself.” He suddenly stood. “I gotta use the john.” While he was gone, I found the waitress, gave her a $20 bill and told her to keep the change. I wanted to get rid of him right away. He was scaring me. When Tierney returned to the table, I told him I’d taken care of the bill.

“How much? Having not seen the bill I ventured a guess. “Five dollars,” I said. “Good.”

We walked to the parking lot. Tierney was slow, struggling with each step. I was polite and open the passenger side door for him. After opening his door, I walked around the front of my car and got behind the wheel. I waited for Tierney. Thirty seconds passed. A minute. I looked back but I couldn’t see him. I got out of the car, thinking maybe he’d fallen. No luck. I scoured the entire parking lot. Tierney was nowhere to be seen. I re-entered the coffee shop and asked the waitress if she’d seen “Larry.” She said no. I checked the men’s room. Nothing.

I returned to the parking lot and discovered Tierney seated in the passenger seat of the black BMW parked next to my Renault. It suddenly hit me what happened. When he saw me walking to the passenger-side door of the Renault he must have thought I was opening the driver-side door of the BMW. He walked around the other side of the BMW, thinking it was my car, and opened the unlocked door. Somehow he forgot the fact that we’d driven for the past half-hour in my French “piece of crap.”

I knocked on the BMW passenger window. He opened the door, furious. “Where the fuck have you been,” he yelled.

“I’ve been looking for you. What are you doing?”

“I’m waiting for you to take me home.”

“This isn’t my car, Mr. Tierney. I’m over there.” I pointed to the Renault. He looked at me, looked at the interior of the BMW then looked at the Renault. He seemed confused. “Fuck,” he spit out. He got out of the BMW and into my car. He told me he lived in a senior apartment in Hollywood. I pulled onto La Cienega and drove north. Tierney remained quiet. The BMW incident clearly rattled him. We drove down Sunset Boulevard. Just east of Fairfax, we passed a Blockbuster Video. I wondered how many of Tierney’s films were carried in the store. I realized I didn’t know any of his other movies. I wanted to ask him about his favorite movie roles but could see he didn’t want to talk. I mumbled something stupid about the delicious Norm’s apple pie.

I dropped him off in front of a seedy-looking building just south of Hollywood Boulevard on Vine. A faded sign in front read “Senior Apartments.” A lightbulb flickered in the dimly-lit lobby. I opened the passenger door and tried to help Tierney to his feet. He pushed me away. We walked together to the apartment entrance. He fumbled with his keys and let himself inside.

“It was a pleasure meeting you, Mr. Tierney.”

I watched as he limped across the lobby and pressed the elevator button. The doors opened and he stepped inside. The interior elevator light shined harshly across his head. Though his face was half in shadow, he no longer looked scary.