Dark Night of the Soul

The Visit is as tonally retarded as his unintentional masterpiece The Happening, but not as much fun. 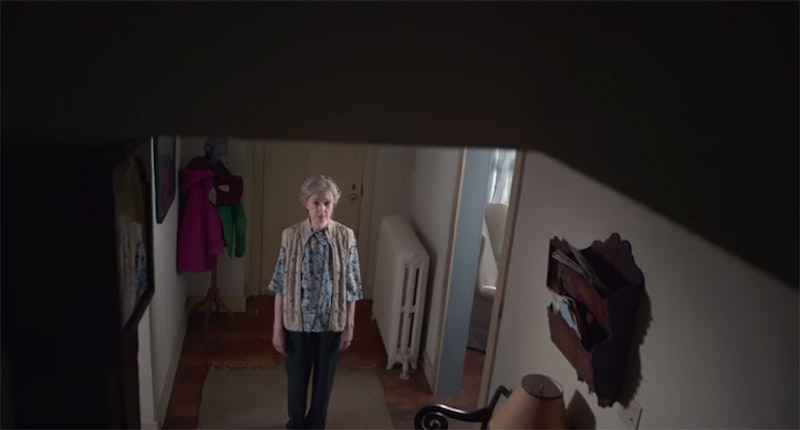 I don’t remember who told me the new M. Night Shyamalan movie was supposed to be good. They were wrong. I prefer going into movies cold, and I hadn’t seen a trailer or read a synopsis or any reviews of The Visit before I saw it this weekend in a packed matinee. Succumbing to lazy blind faith in the all-mighty Tomato Meter, I figured this was his return to form, maybe an intimate family drama with a few spooks, but no big twists. I heard “it’s supposed to be good”—and after half a decade of enormous big budget bombs, he’d learned his lesson. But the man who made the brilliant Unbreakable has lost his marbles, with a tin ear for dialogue and a tonal incapacitation second only to Tommy Wiseau. The guy has turned into an alien ever since The Happening, which remains one of the most bizarre and perversely enjoyable movie-going experiences I’ve ever had. Just cackling from beginning to end, giddy at how awkward and inhuman everything was, from the hot dogs, to the lawn mower, to the ominous shots of trees waving in the wind!

I haven’t seen anything by Shyamalan since, and in seven years, he’s still out of his fucking mind. The Visit is as laughably bad and tonally retarded as The Happening, but not nearly as fun, adventurous, or humorous. It starts off remarkably well, and again, I went in blind—the first 20 minutes are full of some mature editing choices and a particularly moving image of the ersatz grandparents walking hand in hand shot through a misty window, refracting and distorting their figures as they move slowly through the glass. At this point, I’m still expecting a somber, intimate family drama. Kathryn Hahn plays the mother who hasn’t seen her grandparents in years—her young teenage kids have never met them, so she sends them to rural Pennsylvania as a way of reconnecting and making amends. The conceit of the movie is that the daughter is making a documentary about their visit, and everything we see is through her and the brother’s lenses, though the quality is high end, no home video.

Suddenly it’s 2004 again, and everything is falling apart. This is just more of the same, but worse. Cheap spooks and an OHHHHH! plot twist. The Village looks pretty great 11 years on, even though that’s when the seams of Shyamalan’s shoddily constructed gotcha-plots started to rip. I can’t believe The Happening made it past focus groups and studio executives that somehow didn’t laugh all the way through. The Visit is a complete failure as a thriller, as a horror movie—every spook and startle was laughed at, and other moments elicited incredulous Whats? and Huhs? from the crowd. We all booed when it was over, because we’d been duped. This guy should not be allowed to any make more movies until his shuttle lands. From the incredibly lame rapping, “ethnically challenged” 13-year-old white brother, to the fake grandfather’s spoiled diaper sacrament, to the fake grandmother insisting the girl get in the oven—this movie is such a mess, it makes me wonder if M. Night is okay.