A precursor to the peak TV era. 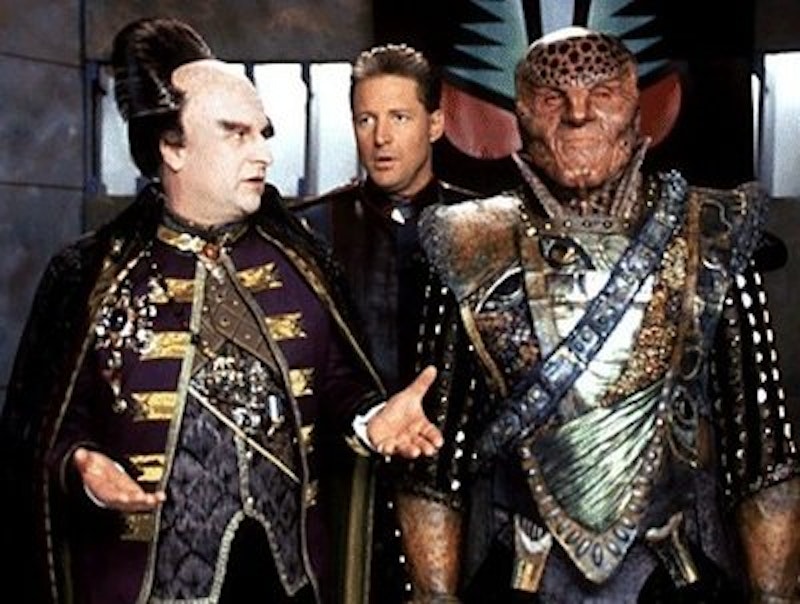 In the last decade or so we’ve seen two things occur in television: the rise of the serialized show that aspires to be the so-called novel for TV, and the increasing popularity of both the fantasy and science fiction genres. Rewind a couple of decades, and the television landscape for such genres was completely different. If your show was science fiction and didn’t contain Star Trek in the title, the prospects of having a second season were very low. The 1990s had one of the great successes in science fiction television with The X-Files, still revered to this day, but aside from a handful of exceptions the decade was a wasteland of cancelled one-season programs: VR.5, M.A.N.T.I.S., Earth 2, even the ambitious Space: Above and Beyond (from X-Files alumni Glen Morgan and James Wong). To help lower the bar even further during the decade, multi-season shows like Seaquest DSV and Sliders devolved into utter stupidity.

In the midst of this early-to-mid decade slump was Babylon 5, perhaps the most ambitious science fiction show in American television history. Nothing else came close in the 90s as far as space opera went. From the start, series creator J. Michael Straczynski envisioned his epic as a five-year narrative, detailing the political and social dynamics arising on a U.N.-like space station located in neutral territory. As the series progressed, the scope widened, going so far as to detail mankind’s future evolution and place in the universe. With a budget less than half of any Star Trek series of the time, and without knowing whether the show would be renewed after each season, it was a minor miracle that it made its five-year goal. (Sadly, Straczynski’s Netflix collaboration with the Wachowski’s, Sense8, was recently cancelled after only two seasons.)

Much of what passed for science fiction in both film and television up until that point rarely had either the ideas or imagination as the best works from writers like Robert A. Heinlein or Philip K. Dick. Science fiction at its best was cerebral, but in visual media, cerebral didn’t sell popcorn or garner Nielsen ratings. Harlan Ellison, who would go on to become Babylon 5‘s creative consultant, talked often of this sort of bastardization of science fiction, referring to it as “sci-fi,” as opposed to the stuff with actual ideas that earned the term “science fiction.” Straczynski was of the same mind, and sought to bring the richness of science fiction to television, to create a science fiction novel (or quintet of novels, since each season had its own title) for the small screen.

But as much as Straczynski was influenced by the future visions of Bester, Heinlein, and Cordwainer Smith, the show’s biggest touchstone was Tolkien, containing many parallels to The Lord of the Rings, in both literal references and in its sense of mythic grandeur. Unlike Tolkien, Straczynski was an avowed atheist, but one of Babylon 5’s more interesting recurring themes was the role of religion in a future multi-cultural, multi-species galaxy. The show itself contained at least three mystics among the principal cast and one very blatant Christ figure. Some things, Straczynski seemed to say, will always be beyond quantification and rationality. The universe will always contain a degree of mystery.

In terms of simple plot, it’s easy to forget that serialization was not a feature of most television in the 1990s, especially science fiction television. When people look back on Star Trek: The Next Generation, they think about their favorite individual episodes, the events of which usually had no bearing on the ones preceding or following. Even The X-Files, with its vaguely serialized, start-and-stop alien cover-up plotline is most often remembered for its best standalone episodes. With its heavily serialized and constantly evolving narrative, what Babylon 5 brought to SF television was a real sense of stakes. Because the status quo was always changing, a seemingly insignificant interaction may have far-reaching consequences later on. And when something truly momentous happened, it threatened to change the show in a fundamental way, something that occurred several times in its run—the sort of thing that might alienate one’s audience. Less than a decade after B5‘s end, the new Battlestar Galactica would adopt many of these same tropes that are now common, maybe even banal. But 20 years ago, for a science fiction show, it felt revolutionary.

In addition, Babylon 5 featured the kind of rich world-building now known to today’s average viewers who can debate the political and historical nuances of Westeros or the Marvel Cinematic Universe. Back in the 90s, this was the domain of a still-niche geek culture. Straczynski, who took on sole writing duties halfway through the show’s second season, knew how devoted fans could be, and from the start engaged them on early Internet newsgroups.

Such things might deserve to be footnotes in television history if the show hadn’t contained such good writing, characterizations and interesting performances, the latter of which displayed by none more so than Andreas Katsulas’ G’Kar. Katsulas, best known for playing the one-armed man in 1993’s The Fugitive, gave a Shakespearean turn that in itself was nothing new to science fiction (David Warner and Christopher Plummer had done it, a few years earlier in Star Trek VI), but for which B5‘s long-form narrative allowed his character to begin as a petty villain in the first season and end up a wisdom-spouting mystic in the last. Katsulas, who died in 2006, portrayed his character’s bitterness, tragic downfall, and ultimate enlightenment with razor sharpness, an actor giving his life’s performance, in full-body makeup. It’s hard to think of a better performance by an actor portraying an alien, although the show’s own Peter Jurasik—who played G’Kar’s rival Londo Mollari—came close.

With its low-budget production design and all-CGI outer space effects, Babylon 5 may look hopelessly dated to contemporary viewers, especially in the age of prestige TV that aspires to be cinematic, a look that is itself becoming more and more uniform and clichéd: TV as cinema as oatmeal. But that’s perhaps one reason why Babylon 5 remains watchable. Its best moments were cinematic in ways that much of contemporary television is not, because its creators understood that when aspiring toward the cinematic, editing was more important than look (it’s epic space battles were edited with the sort of elegance and style rarely seen on TV, then or now), an ethos sorely lacking in today’s shaky-cam non-style coverage. Babylon 5‘s low budget often gave its interior scenes a minimalist aesthetic that mimics the effect of watching theater: the viewer accepts it almost solely on the strength of its writing and characterizations. Perhaps that’s just the fan in me making excuses, but if so, I’ll add that the production values improve over time and eventually are no longer a distraction.

I don’t want to oversell the show. It has flaws, many of which are easily forgiven considering the constraints Straczynski and company were working under. Things don’t really take off until the second season, and I’ve often wondered if the reason the show isn’t referenced more is that newer viewers give up before they have gotten anywhere (An AV Club article from 2012 agrees with this thesis, and includes a nifty episode guide to help newbies find their way in). Unlike a lot of multi-season epics in the peak-TV era, Babylon 5 never lost its way, even if its final season was its weakest. Fans of time-and-universe spanning epic science fiction, ought to give it a chance. Television, with space opera, hasn’t seen anything quite as expansive since.