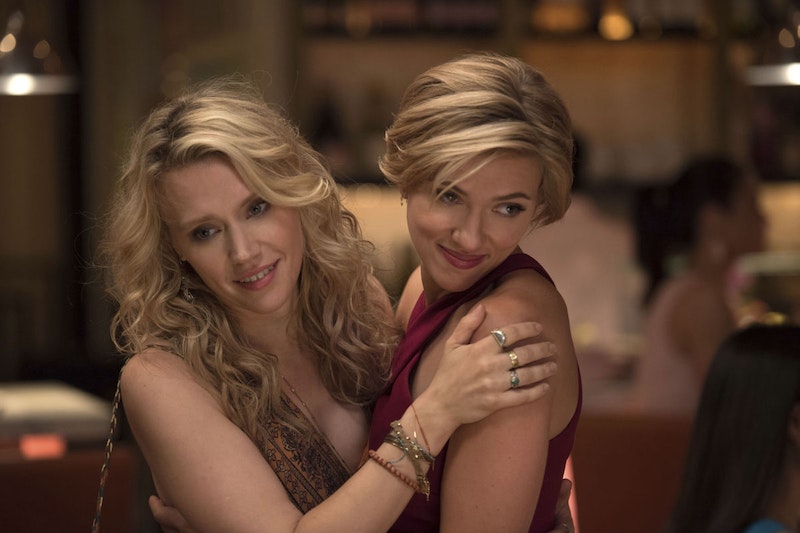 With the new comedy Rough Night, the natural temptation is a comparison to Bridesmaids, the hard-R comedy from six summers ago that showed female-centered raunchy comedy could work both creatively and financially. Rough Night matches Bridesmaids laugh-for-laugh, something that didn’t seem possible, based on underwhelming trailers. But it’s got a different sensibility, one that’s fresh and never less than gut-bustlingly funny. Rough Night combines a top-flight cast with a premise that never runs out of steam, adding up to one of the year’s best comedies.

Even more than Bridesmaids or The Hangover, Rough Night borrows its rough plot outline from Very Bad Things, the Christian Slater/Jeremy Piven/Daniel Stern dark comedy from 1998 that was also built around the accidental death of a stripper during a bachelor party. But aside from flipping the genders, Rough Night trades in Very Bad Things’ nihilism for gloriously escalating stakes.

Scarlett Johansson stars as the workaholic bride-to-be, in the midst of running for political office and impending marriage to her fiancé Peter (Paul W. Downs). She sets off for Miami for a bachelorette weekend with her best college friends—clingy Alice (Jillian Bell), snobbish Blair (Zoe Kravitz) and Occupy Wall Street-type Frankie (Ilana Glazer). Also on hand is Kate McKinnon as her Australian friend from her time abroad.

Things, of course, go awry quickly, leading to some Weekend at Bernie’s-style dead body comedy (the film’s original title, Move That Body, was much better). It’s the exact sort of comedy that usually goes off a cliff in the third act or even earlier. But this time, it holds up until the very end. Rough Night comes with a pedigree heavily associated with the Comedy Central hit show Broad City—its director, Lucia Aniello, has long written for the show, as has co-writer and co-star Downs, and the series’ co-creator and star Glazer is part of the cast. The movie’s voice isn’t exactly like that of Broad City, but its DNA is apparent here.

But then Downs, co-writer and Aniello’s real-life boyfriend, just about walks away with the film. It starts with a fantastic running gag in which his friends (including comedy stalwarts Eric Andre, Hasan Minhaj, and Bo Burnham) are wine-sipping metrosexuals. But then things take a turn, and Downs is game for all of it.

As for the rest of the cast, Johansson isn’t anyone’s idea of a comedy superstar; she might be the first performer in history to make SNL’s Five Timers’ Club without ever doing anything memorable on the show. But she’s fine here. Ironically, McKinnon, coming off a year of essentially pitching a shutout on SNL, is stuck with a character far from the best she's played. Glazer is better, as is Kravitz, hot off of Big Little Lies; the latter’s interaction with a swinger couple (Ty Burrell and Demi Moore) is a highlight.

Does the plot resolve itself too nicely? Probably. Do the character relationships delve into cliché? Sure. But the film does so much right that I didn’t mind.

All Eyez on Me is a Rote Biopic B-

All Eyez on Me is an unimaginative biopic of rap legend Tupac Shakur, which follows the standard timeline of his career so straightforwardly that the screenplay is practically adapted directly from Tupac’s Wikipedia page. That said, the film has a dynamite performance at its center from Tupac look- and sound-alike and novice actor Demetrius Shipp, Jr., and it’s a handsomely mounted production that gets the little details right. There’s nothing like that glaring gaffe in Straight Outta Compton where Eazy E’s wearing a White Sox hat from the wrong decade.

Directed by the music video filmmaker known as Benny Boom, All Eyez on Me has a Citizen Kane-style structure, with a voiceover narration conducted via a jailhouse interview with a journalist (Hill Harper). These interviews raise issues, from arguments over what’s now called respectability politics to racist and sexist lyrics, that the rest of the film has just about no interest in exploring.

The film, 140 minutes, follows Shakur’s life from the womb—his Black Panther mother goes on trial while pregnant with him. We see his childhood, early work with The Digital Underground in Oakland, and eventually his music and movie stardom in the early 1990s, sprinkled with a half-dozen musical performances. Much of the film’s second and much better half consists of his involvement with Death Row Records and the scandalous East Coast/West Coast wars of that period.

This is the third film about that particular era of rap, with numerous overlapping characters, following 2015’s Compton and 2009’s forgettable Biggie biopic Notorious, and the three films overlap with various characters and events (Jamal Woodard, star of the latter film, plays Biggie again here).

All Eyez is much better than Notorious, but doesn’t have anywhere close to the energy and joy of Straight Outta Compton, while also repeating many of its flaws. That starts with notably thinly developed supporting characters—including just about every female save for Tupac’s mother Afeni Shakur—and a tendency to treat every major controversy in the manner most charitable to the subject’s version of events. Oh, and for some reason both Compton and All Eyez have chosen actors to play Snoop Dogg who look nothing whatsoever like him.

There have been close to a dozen Tupac documentaries, many of which entertain various conspiracy theories about the rapper’s death; another feature, LAbyrinth, based on one of the more entertaining Tupac/Biggie death conspiracies, is set for release later this year. The film, though, doesn’t delve into any of the conspiracy theories, nor does it entertain any of that silliness about Tupac having faked his own death.

If Tupac meant a lot to you, or if you lived through these events, you’ll probably have a good time at All Eyez on Me. But it fails in any way to do anything unconventional with the music biopic formula.