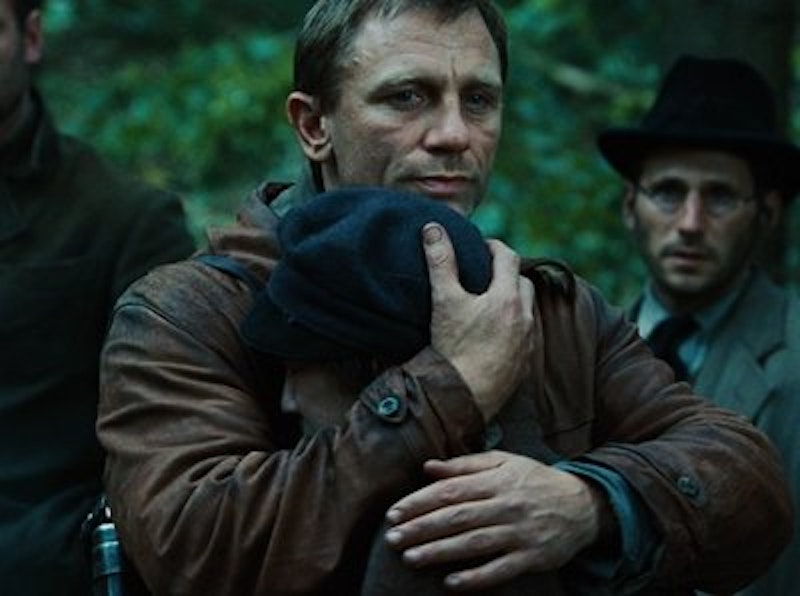 This is part of a series on fascism in film. The last entry on Look Who's Back is here.

In Defiance (2008), Tuvia Bielski rides on a white horse, rallying the Belarusian Jews who’ve sought refuge with him in the forest from Nazi terror. One child, overawed by the contrast between Jewish stereotype and the heroic figure before him, whispers, "Is he a Jew?" His mother assures him, and the film audience, that yes, the hero is a Jew.

But Bielski is not a Jew. He's played by Daniel Craig, a gentile. Casting Craig is an odd choice, given the fact that Defiance is in large part a film about Jewish identity and representation.  Holocaust films like Schindler's List or The Zookeeper's Daughter are typically centered on iconic gentile saviors and Jewish victimization. As Tuvia's brother Zus (played by Jewish Liev Schreiber) remarks with bitterness, Jews are not seen as good at fighting or drinking—only at dying.

Defiance means to fix that. Based loosely on historical events, the movie tells the story of the Polish Bielski brothers, who fought as partisans during the German occupation of Belarus, and built a community for Jewish refugees in the forest.

The Bielski resistance is deliberately presented as a refutation of Jewish weakness and victimization. The film includes some familiar Jewish stereotypes; for instance, the Bielskis take in Isaac Malbin (Mark Feuerstein) a thin, nerdy Jewish intellectual, who laughingly acknowledges he has never worked with his hands. But standing next to the virile, decisive, violent Tuvia, it's clear that Isaac is not the only thing that Jews can be—and even Isaac, it turns out, can fight heroically for the cause.

Defiance is, in other words, an empowerment narrative—a kind of superhero story for Jews. Tuvia is compared to Moses, and told that he has been sent by God to save the Jewish people. He’s conflicted about violence, but the point of the film is to cheer as he and his brothers—and other Jewish men and women—machine-gun large numbers of anonymous Nazi thugs. The film is less obvious about the implications than Inglorious Basterds released the following year, but it's still essentially a revenge film. For decades, on screen, we've seen Nazis torturing and murdering Jews. In Defiance, the Jews get their own back—as in an emotionally confused scene in which the Jewish refugees kick a Nazi soldier to death while Craig looks on silently and soulfully.

The emphasis on empowerment is a welcome change—but it also limits the emotional range of the film. Tuvia and Zus debate the merits of murdering Nazi collaborators, and worry about losing touch with their humanity and becoming like the fascists they fight. The concern is pro forma—of course they're going to kill Nazis—but they're right that doing so has consequences. The film is so invested in empowerment it has difficulty bringing home tragedy; the Bielski's grief for their dead parents and families is remote and unaffecting, in part because the deaths all occur offscreen to characters that the viewer doesn't know. Partitioned off in this way, the never-quite-seen Holocaust becomes less a real, present tragedy rather than a kind of excuse for violent heroics.

Defiance wants to counter the fascist logic that Jews are only victims. But it ends up locked into the fascist logic whereby one's status as human is justified by the ability to commit violence, justified by revenge narratives. Jews torturing Nazis to death is a fascist fantasy as much as a Jewish one. Even the image of a strong Jewish community living off the land, native to the forest, seems like an echo of Nazi volk myths—as well as of Zionist ethno-nationalism.

The film is a conscious reference to and justification of a militarized Israel, given the representation of Jewish community as armed camp. The communal work ethic echoes the kibbutz, and the insistence that everyone, men and women, be prepared to take up arms nods to Israel's universal military service for all, regardless of gender. The Jews in Defiance who join the Soviet partisans learn quickly that Communist internationalism is rabidly anti-Semitic as well; there are no allies in the forest. Jewish identity here is forged in adversity, and is inseparable from Jewish nationalism.

You could see the casting of Craig as an escape from the Nazi logic of Jewish representation. Like the Jews in the ghetto who remove their yellow stars to join the Bielskis in the forest, Jewish people in Hollywood are unmarked. White Jewish actors (like Gal Gadot) can play white people of any ethnicity; similarly, white actors of different backgrounds can play Jews. Jews are not ghettoized. They can be anyone. People don't see Jewishness. That's one vision of equality.

And yet, even in assimilation, Jewish representation is shadowed by fascism. Jewish films are still, disproportionately, insistently, Holocaust films. When filmmakers look for someone to represent a heroic, non-stereotypical Jew, they turn to a man who, for all his considerable virtues, isn't Jewish.

Jewish identity seems intertwined with victimization, not least when a rejection of victimization turns into an assertion of virile, righteous manliness—the film is careful to provide each of the three Bielski brothers with stunningly attractive love interests.

As a Jew, I'm sure I speak for many of my brethren when I say, "Who wouldn't want to be Daniel Craig?" But for all its defiance of stereotypical images of Jews, Defiance is imaginatively constrained by those images, both in its casting and in the way it’s locked into a perfect inversion of the typical vision of Jews. More than half a century after the Nazis were defeated, they still, painfully, determine the preconceptions and assumptions in our heads when we look at someone and say, "Is he a Jew?"