Film Review: The Mummy Is Deader Than Dead

New version of classic gives you no reason to care. D 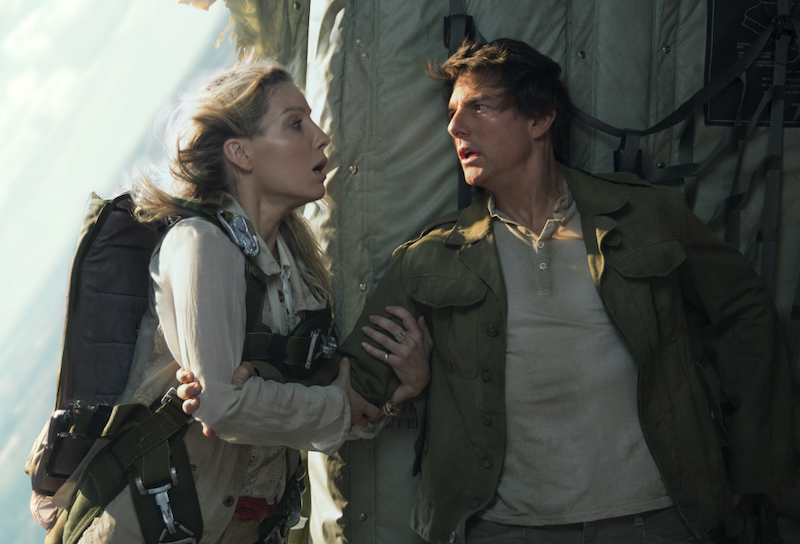 The new “Dark Universe” film series, featuring classic Universal characters, kicks off with a resounding thud in The Mummy, the least inventive—and least watchable—summer blockbuster in a long time.

The Mummy tradition in Hollywood goes back to the Boris Karloff version in 1932, and most have followed the basic template of an ancient Egyptian mummy unearthed in present times or sometime close to them, usually with an architect and love interest on board too. The new version jumps off from that point and combines it with a stupid plot, long on exposition and convoluted action scenes, but short on anything resembling stakes.

This Mummy gets off to a somewhat promising start: Tom Cruise and Jake Johnson play Army-adjacent American treasure hunters in present-day Iraq, tailing a military unit, without much explanation as to why the Iraq War continues with ground troops in 2017. With the help of a plucky archeologist (Annabelle Wallis), they stumble into a tomb hiding a mummified Egyptian princess (Sofia Boutella), who appears to have some connection with Cruise.

That the Mummy is now female is probably the film’s lone interesting and inventive idea, but it bungles even that, giving Boutella very little to do besides growl and keeping her in various stages of imprisonment for long stretches.

Meanwhile, there’s a second act that helps set up the universe of future sequels, built around Russell Crowe, as a Dr. Jekyll/Mr. Hyde character who alternates huge amounts of plot exposition with ludicrous overacting. It’s probably the worst performance of Crowe’s career that didn’t involving singing to Jean Valjean. Cruise is his usual self, if not the greatest imaginable fit for the role. And while Wallis has some moments as a character more well-rounded than your typical love interest, Boutella is just hidden—at different times, behind garish CGI, tattoos, prison restraints, and smoke.

Of the many huge problems with The Mummy, the most fatal is this: There’s just plain no reason to care about any of it. Why is the Mummy back? What is her backstory? I found it all but impossible to care about any of it. When a fellow critic texted me a couple of days later to clarify some plot points, I responded that I’d forgotten all that by the time the movie was over.

The visuals aren’t much better; the director, Alex Kurtzman, has no idea how to make a human vs. Mummy battle interesting, much less an explosion or a fight scene. You probably shouldn’t see this movie at all, but if you must, make sure it’s not in 3D—it adds nothing, except for the unmistakable addition of a cruddy air of darkness to several scenes.

The director, Kurtzman, is best known as a screenwriter of such subpar blockbusters as Mission: Impossible III, Transformers 2 ,and The Amazing Spider-Man 2, mostly re-written with his erstwhile partner, the much-maligned Twitter combatant and 9/11 truther Roberto Orci.

The Mummy credits three screenwriters, plus three more with a “story by” credit. That list includes some big screenwriting names, like Christopher McQuarrie, David Koepp and Jenny Lumet. Orci is an executive producer and so is Dark Universe head honcho Chris Morgan, who wrote the last five Fast and the Furious movies.

Is this a too-many-cooks problem, or simply an idea that never could have worked? It’s probably not the latter. The Brendan Fraser Mummy movies, starting in 1999, may have been a campy Indiana Jones knockoff, but the first Fraser film is better than this year’s in just about every conceivable way.

Beatriz at Dinner B

If you’re looking for something completely different from a mindless blockbuster, I suggest Beatriz at Dinner, a festival fave starring Salma Hayek. It’s one of the better films from a team of director Miguel Arteta and writer Mike White (Chuck and Buck, The Good Girl).

Beatriz at Dinner is a very well-acted, and uncomfortable, drama of American class conflict. Hayek plays Beatriz, a poor Mexican-American who works as a massage therapist to a rich lady (Connie Britton), getting ready to host a dinner party for her husband’s evil tycoon boss (John Lithgow).

When contrivances bring Beatriz into the dinner party itself, things start off comfortable but then get decidedly less so. That’s because the rich people in the movie are some of the most cartoonishly evil you’ve ever seen on screen.

White’s script has an ear for how these sorts of people talk, most notably the way the other males (David Warshofsky and Jay Duplass) act as shameless sycophants to Lithgow’s tycoon is a way that’s practically Trumpian. The character, though, is a lot more Jack Welch than Donald Trump.

The script goes to some interesting and very cringe-worthy places. And while the ending of somewhat lackluster, this is probably Hayek’s best movie.