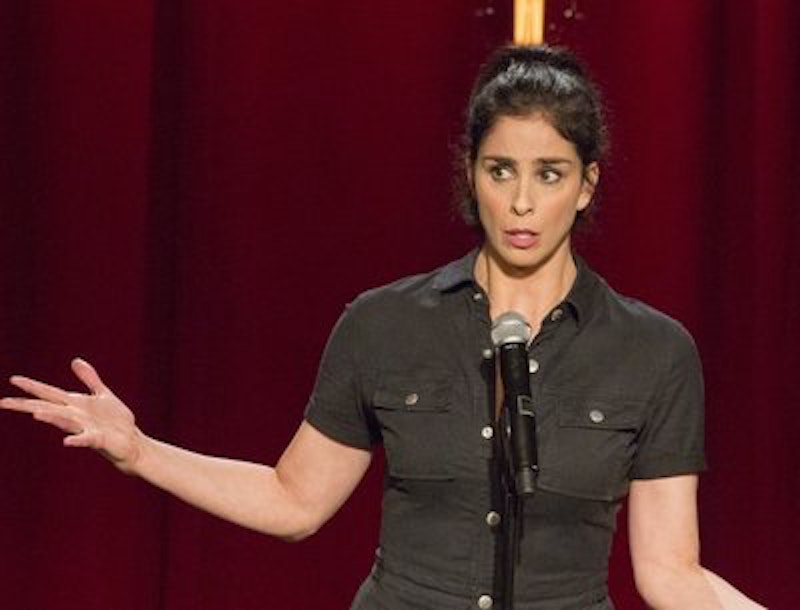 “I don’t know. I peg you as an on-the-belly guy,” Sarah Silverman tells an audience member. She’s guessing masturbation styles. Another line: “I just heard my sister laughing. She’s dead.” But actually her sister’s alive and watching from the audience. Silverman tells a story about her. The punchline, pronounced tragically: “Because she’d been shitting herself.” A Speck of Dust, Silverman’s new comedy special on Netflix, is about life lived with the underwear on the outside. That was allegedly the style of Generation X, and Silverman belongs to Generation X. Nobody’s talked about Gen X in a while, and at the time various smart people said the idea was a media hoax. Even so, Silverman seems like a poster girl for middle-aged Gen X. The decades have worn on, the young people have grown old, but she’s still there with her scanty, bedraggled, urine-stained worldview.

It’s the worldview of an unwanted child. The child in question has seen how adult promises fall through, but now she’s stuck in adulthood and must shrug her way through it. She hopes that its fraud and time-wasting somehow add up to something. Meanwhile, she keeps her thoughts low to the ground. The worm’s eye view comes naturally to her. On the Bible: “It’s so dense, yet not as deep as it thinks it is.” She has grievances about squirrels and the biology of acorn gathering. Wading into her opinion, she says, “First of all, animals aren’t supposed to make mistakes.” This is a classic Gen X line, like a stick figure drawing that attempts to explain a world.

The disheveled, shambolic child was never stupid, and Silverman has grown even smarter. In mid-life she commands a stage while seeming just to chat with the audience. “Were you making a noise just because you’re impressed I know that word?” she asks somebody in the front row. (She’d just announced the show had come to its denouement.) Now and then it’s like the stuffing had drifted out of her head. “Sarah, focus!” she tells herself. At another point, catching herself up short: “That’s not even the story I want to tell you.” But this is a ruse. Pretending to fall apart, she’s actually setting us up, building from joke to joke. To tell the story that, supposedly, she didn’t want to tell, she had to perform a couple of miniature set-pieces: running through the lyrics of a favorite song to remember what the song was (“Don’t Stop Believing”), and then lip synching the song as her 13-year-old self.

Admittedly, Silverman isn’t the first person to comment on spin class, Barbie’s physique, or the bad things romantic comedies have done to love. But she can make a stoic menstruation face (somber but serene), and the look of shocked relief (fingertips to forehead) that hits a girl upon confronting her shit-filled panties and not a rapist. She can turn a joke from dirty to filthy by adding what sounds like harmless verbal fluff. “I don’t know, what is that? It’s subjective,” she says and the damage is done, though without context you could never tell. Silverman also came up with this punchline, about her sister: “She must have told me nine things. Two of them should have been hooks.” The context there is that the sister has a friend without hands. Five minutes on, and the follow-up punchline comes wandering in: “It was land mines when she was seven.” Believe it or not, but the joke’s on the audience and it works. That it does so demonstrates how brutal and shrewd Silverman can be, and how smart even a stunted, disaffected child can become as the decades pass. Generation X, if there is such a thing, may never be happy. But neither is it dumb, not judging by Sarah Silverman’s act.