François Truffaut’s Day for Night (1973), is a film about filmmaking. 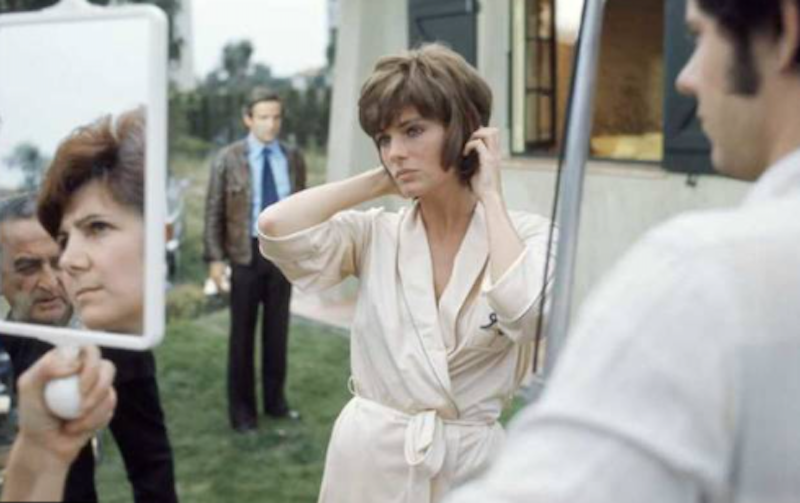 François Truffaut and the art of the moviemaking. Every cinephile loves to explore what happens on the film set. We want to know the secrets of the moviemaking, how each scene is constructed, and what the director and the crew did to put that special touch into the final cut. Magicians rarely reveal their tricks, and one could probably take a solid guess that not everything is revealed even when the camera is permitted to be the spying eye. But the thought and a taste of what could have occurred on a film set brings pure pleasure for all who love movies.

François Truffaut’s Day for Night (1973), is a film about filmmaking. It’s fictional and the entire notion of the behind-the-scenes becomes film itself. Truffaut plays a director (Ferrand) trying to finish a film on time and on budget. The fictional film called Meet Pamela is a melodrama and its filming is fraught with many issues. The lead actress, Julie Baker (Jacqueline Bisset) hasn’t yet arrived from America. She’s had a nervous breakdown and married her psychiatrist. The story of her nervous breakdown is known to everyone but the crew is politely avoiding any mention of it. At least to Julie.

The aging diva Séverine (Valentina Cortese) is mostly drunk on the set and she’s coping with personal problems, which mainly involve an inability to accept that she’s not young anymore. Similarly, the male lead, Alexandre (Jean-Pierre Aumont) meditates on the meaning of death, since he too is old. Except, as Séverine so shrewdly points out to the make-up girl, Alexandre isn’t the one stuck with the role of a jilted spouse because men get better as they grow old.

The young male lead is Alphonse (Jean-Pierre Léaud), who in the fictional film within the film plays the man who’s cheated on by Julie Baker with his own father, Alexandre. He and his mother, Séverine, are left alone, melodramatically lamenting the great disruption of their lives. While Cortese brings an operatic touch to her role (both as the actress and the mother in the fictional movie) that’s always bordering on comedy, Léaud (a regular in Truffaut’s oeuvre and somewhat of his alter ego in many cases) brings youthful foolishness that isn’t pleasant or amusing. He’s a spoiled brat, and unable to make any life decisions, especially concerning his love life. He obsessively asks every male crew member whether women are magic, as if the answer to that will determine the course of melodramatic life. In his naivete, Alphonse thinks that the crew truly cares for his own internal drama but in reality, Ferrand simply humors him, as he pretends to listen carefully his young male lead’s pointless love troubles. For Ferrand, there’s only thing that is on his mind: finish the film.

Truffaut’s Ferrand is a benevolent dictator, who maintains his distance and level-headed approach throughout most of the production. He doesn’t really know whether the film will get finished on time but somehow has some elusive faith that even he doesn’t really understand that well. Orson Welles famously said that a film director is “the man who presides over accidents but doesn’t make them,” and this is what Ferrand (and we assume Truffaut) is trying to do.

Still, the anxiety is present and we witness Ferrand’s worries only in his dreams. He tosses and turns in the hotel bed, muttering whether he’ll be able to finish the film on time and with quality. In a continuous sequence throughout the various points in the film, Ferrand (or is it Truffaut?) dreams about a boy whom we assume is Ferrand (Truffaut) himself. The scene’s in black and white, and a boy is walking through the darkly-lit city street, carrying a long cane that seems too big for a boy who isn’t even in his teens. The sound of cane rubbing against the pavement echoes through the empty street. The boy arrives at his destination, a cinema, and steals the movie stills of Orson Welles’ Citizen Kane (1941). It’s a sweet and lovely scene of a boy who is in love with the movies.

Truffaut held Welles in extremely high regard and many, including Truffaut, think that cinema as we know it wouldn’t exist without Citizen Kane, and this continuous dream sequence is an ode to American cinema. But it isn’t just the use of Welles’ film, or even several other mentions of Orson Welles throughout the film that makes up this love song to the grandiosity of American cinema (let us also not forget Truffaut’s admiration of Alfred Hitchcock as well).

The title itself, which in French is La Nuit américaine (American night) refers to the filmmaking technique in which night scenes are shot in daylight with the help of a filter that goes over the camera lens. This isn’t something Truffaut came up with himself but the fact that such a technique in French directing circles implies an admiration of American cinematic accomplishment is an indicator how the French directors view American film.

Truffaut has always been a wholistic filmmaker, and much like Welles, he has never sought to engage in deconstructive process of art. Rather, like Welles, his films always focus on the human interiority (to a lesser or bigger degree) and how that level of interiority relates to the rest of the world. Truffaut isn’t interested in pure shock, although his films are provocative. There’s a genuine child-like spirit in his filmmaking, and nowhere is it more visible than in Day for Night. He loves this strange and difficult art despite the fact that it creates anxiety. Any good director knows that the filmmaking is partially about joy; even happiness doesn’t exist (on or off screen).

In his conversations with Henry Jaglom, Welles said that art must be “life-affirming,” and not hollow or something that drags you through the muck of darkness without much meaning. Truffaut has expressed this in most of his films. In Day for Night, he brings in the human comedy and the sorrows that make up our messy and beautiful existence that can only be described in Welles’ words: “Life-affirming.”