I’m Thinking of Ending Things, while not as awful as Antkind, is another disappointing retread. C 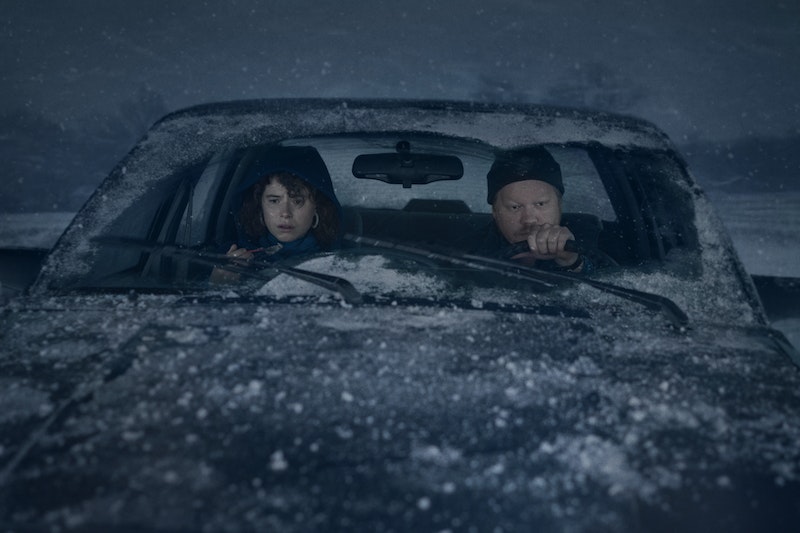 I’m tired of watching basket cases talk themselves into panic attacks about how much time they’ve wasted and how old they’re getting and how nothing they’ll do will ever mean anything. Thus runs most of I’m Thinking of Ending Things, Charlie Kaufman’s new film for Netflix adapted from a book by Ian Reid. For nearly half of its 134 minutes, we sit in the car with Jessie Buckley and Jesse Plemons, a couple on their way to visit the latter’s parents. The meat of the movie is in that car, rotting in the mouths of puppets who have been given a horribly tedious assignment: verbalize Charlie Kaufman's inner monologue.

Jake (Plemons) and Lucy (Buckley) are on a long, dark, snowy drive and she’s “thinking of ending things.” Jake can hear Lucy, or Lucia, or Louisa, names that barely stick before her identity begins to slip (people keep calling her, all named variations on Lucy). By the time they get to the house, it’s predictably arch and strange, with Toni Collette and David Thewlis playing Plemons’ freakazoid parents. Time is out of joint in their house, meals are prepared in an instant and people age decades once they turn a corner. There are some striking images here, like when Thewlis comes down to talk to Buckley and he’s suddenly 30 years older, with dementia. “I can’t wait until it’s so bad I can’t remember I can’t remember!”

Unfortunately, Kaufman leans on dialogue in the car, and I’m Thinking of Ending Things is an ADD tour through his running subjects: loneliness, anxiety, lost love, the crush of time. Kaufman’s fear of death and insignificance isn't resonant to me anymore—it’s a paralyzing, self-annihilating state to live in, much less make your life’s work in. A character monologuing about “your wife becoming a wife-shaped loneliness” is so much worse than Thewlis turning that corner, because there we understand everything completely at a gut level with an image, not an overwrought line pulling the sentiment down to earth.

Antkind, Kaufman's recent debut novel, was a huge disappointment, tortuous compared to I'm Thinking of Ending Things, but Kaufman has already covered all of this material before. He has nothing new to say. Synecdoche was the apex of all of this solipsistic miserable male bullshit, and it was incredible. It was also hilarious—remember Michelle Williams, exasperated, pulling up her sweater to reveal a giant tattoo of the devil on her back? “EVERYONE’S TATTOOED!” These non-sequitors and flights of fancy are the only thing Kaufman is still good at. The only really funny scene in the car is when Lucy suddenly starts reciting Pauline Kael's review of A Woman Under the Influence, complete with an impression and a cigarette that appears out of nowhere. Again, from Synecdoche: "Go ahead, I've seen boy parts."

As in Antkind, Kaufman merely suggests playing with film history and our collective memories of movies instead of actually doing it in a meaningful and impactful way. I saw I'm Thinking of Ending Things described as a "masterclass in semiotics." Give me a fucking break. Read Peter Watkins' website for that. Two major films from last year wrestled and reckoned with cinema's complicity in the crimes of the 20th century: Once Upon a Time in Hollywood and The Image Book. Form and function were one, as with Synecdoche, and its critique didn't need to be spelled out by one of its characters. I'm Thinking of Ending Things is full of pop philosophy for surbanites who've never moved beyond solipsism and introspection. This can work: again, Synecdoche is an astonishing film not because of stuff like the funeral speech (the worst scene), but because its structure and its images are at one, all in the service of sending the audience down an avalanche of time. It's one of the most formally unique films I've ever seen, and the only movie that's made me feel the same way is John Ford's The Long Gray Line. When Dianne Wiest directs Philip Seymour Hoffman to "Die" and the screen finally fades to white and that broken, sad electronic sound keeps looping, one is not thinking of Capgras or the Cotard Delusion or Krapp's Last Tape or any of the other "high-brow" references made during the movie. One is simply wiped clean and nailed to the wall. I couldn't catch my breath after seeing Synecdoche the first time. That's a high bar.

A couple of things I noticed though: Kaufman’s also playing with his own place in film history. He obviously cast Plemons as an ersatz PSH, and towards the end of the film, there’s an overhead shot of a car that recreates the iconic poster image of Eternal Sunshine of the Spotless Mind. In the final 20 minutes, there's a welcome burst of imagination missing from an otherwise punishing experience. These flights of fancy are fun but they’re all too brief. I’m Thinking of Ending Things is Kaufman spinning his wheels, speechifying about the meaninglessness of everything before going into another tired and awkward misunderstood exchange. Łukasz Żal’s camerawork is extraordinary, and even trapped in the car, the process shots are beautiful, recalling Kaufman’s minor but moving Anomalisa. This movie is just too tied down to earth, both by Kaufman’s OCD repetitions and his infuriating refusal to visualize and externalize the things his characters are talking about. Only when the film flies into total fantasy does it feel free. But I think he hit his apex with Synecdoche, and his last two major works have only made it look worse in retrospect.