On Hercules in the Haunted World (1961) and other Italian "sword-and-sandal" genre films of the time. 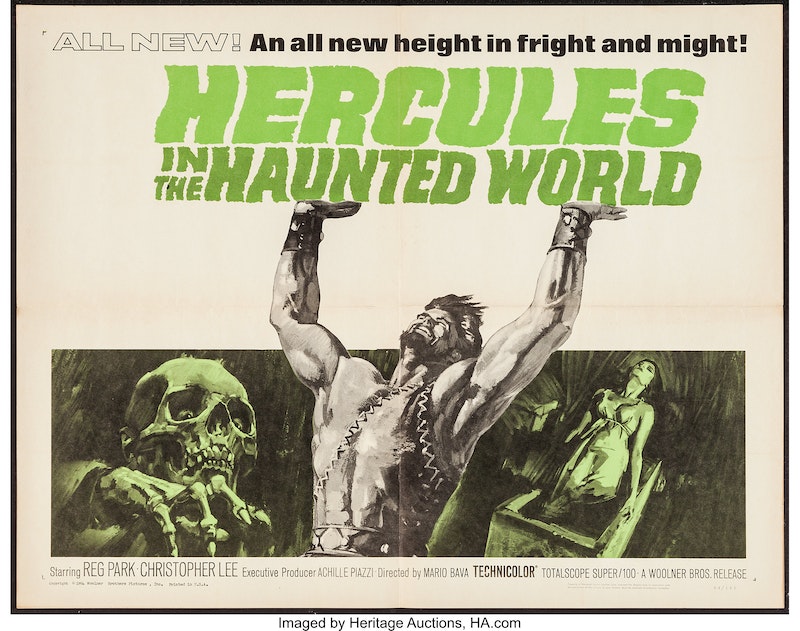 Fear, death, and hell are no strangers to the cinema, but it’s rare to find an action film that confronts those concepts. Mario Bava’s Hercules In The Haunted World is perhaps the greatest action film to present a nuanced perspective on the dread of mortality and afterlife.

Hercules In The Haunted World was the sixth installment in the Italian Hercules franchise. It came out in 1961 and featured Reg Park—a three time Mr. Universe and the fifth in a long line of body builders who portrayed the champion. Christopher Lee also stars in one of his greatest roles as Herc’s romantic rival the demonic conjurer King Lico.

Influential filmmaker Bava, whose skills as a cinematographer were matched only by his directorial work, helmed this Italian/West German co-production. Bava’s style exists in a genre all its own, marrying surrealist visual effects and the colorful poetry of late-period New Wave works. Halfway through a 40-year career he became closely associated with horror movies. The works of Italian gore gods Dario Argento and Lucio Fulci, American horror directors Wes Craven and John Carpenter, and early heavy metal video artists Robin Sloane and Jonas Arkelund owe a great debt to Bava’s visionary splendor. The cult hits Labyrinth, Krull, and Dark Crystal all possess the seamless combination of moody chills and epic adventure that Bava brought to the sword-and-sandal genre.

Hercules In The Haunted World follows the ripped demi-god’s quest into the realm of Hades, where he must retrieve The Stone Of Forgetfulness, the only thing that can release his lover Princess Deianira from a hypnotic trance. As Hercules and his small crew sail into the underworld, illusions of horror become just as dangerous as the real thing. It’s desolation where insanity constantly threatens the trio. Scalding mud bubbles and churns, plumes of smoke and flame lick at their feet, an army of zombies storm the cavernous spirit world, and all of this may or may not be real. The realm of Hades instills fear just by looking crazy. It’s a thinly-veiled reminder that fear itself—whether logical or irrational—is often the deadliest hell.

The film’s weirdest supporting figure is Medea The Oracle, a variation on a character from The Argonautica. Gaia Germani dominates with her brief appearances in this role. Wielding bizarre hand gestures and a porcelain death mask, Medea is a disturbing presence, but her help is essential to Hercules’ quest. It’s a relationship that illustrates mystery’s impact as a motivator disguised as an omen of doom.