I'm Thinking of Ending Things is a welcome return for the abstruse writer/director. A 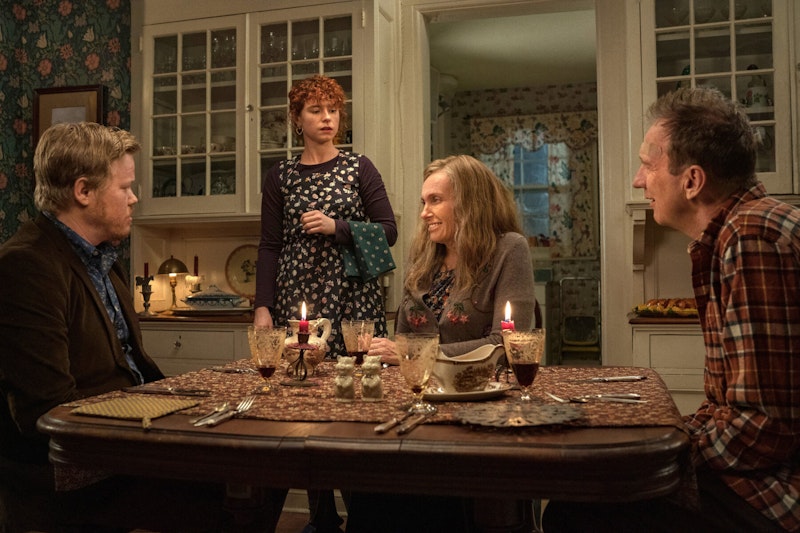 I'm Thinking of Ending Things is Charlie Kaufman's David Lynch movie. Based on the 2016 novel of the same name by Iain Reid, it's a vision of nightmarish Americana, told in a way meant to leave audiences guessing. It's the best of the three films Kaufman has directed to date, and the one with the most assured direction.

I'm Thinking of Ending Things, which debuted on Netflix, stars Jesse Plemons and Jessie Buckley as a couple, introduced driving in a car to visit his parents. This is exactly how Get Out started, as did a few more comedy-oriented films, but rather than laughs or social commentary, this is more in the realm of psychological, mind-bending thriller. The title phrase, repeated many times, could be a reference to a breakup, suicide, or some other type of existential end.

The two haven't been together that long—just a few weeks, and there are hints that the relationship isn’t particularly loving or healthy—and it’s soon clear that the boyfriend is the type of dude prone to droning on to his uninterested girlfriend about old movies or David Foster Wallace. The car scene, in a snowstorm, goes on for a long time, and odd things happen, from strange phone calls to the girlfriend seeming to recognize things in this town where she's never been. It gets weirder once they reach the farmhouse of the parents (David Thewlis and Toni Collette), strange people who suddenly get older or younger, depending on the scene.

The film progresses towards a visit to a local ice cream stand that's probably the most delightfully unsettling movie scene of the year so far. The movie makes changes from the source material, I gather, that if left in place would’ve seemed like a deliberate echo of something in a previous Kaufman film.

All four of the main actors are outstanding, but the film's MVP is Jessie Buckley, the Irish actress who starred in last year's Wild Rose. Her role is a lot of voiceover and looking confused, but she nails it. Plemons, often in the background of prestige movies, makes the most of a leading role, and Thewlis—who voiced the main character in Anomalisa—has fun as the father, who's inexplicably British. And Collette, with this and Hereditary, has carved out a niche playing mysteriously addled mothers.

Kaufman, the screenwriter of Adaptation, Eternal Sunshine of the Spotless Mind, and Being John Malkovich, has developed a body of work as a director that's weirder and less accessible than his collaborations with Spike Jonze and other directors. His debut was 2008's Synecdoche, New York, and he followed that up with 2015’s Anomalisa, a stop-motion animated movie, in which the same actor (Tom Noonan) voiced nearly every character.

I never got Synecdoche, but admit a soft spot for Anomalisa, the only movie I can think of that managed to make a puppet sex scene legitimately affecting. I'm Thinking of Ending Things is Kaufman's first film for Netflix, and I'm curious how much of an impact it’ll have there. I do expect, and look forward, to a lot of debates and arguments about this film, what's "really" going on in it, and people trying—probably in vain— to "solve" it.