A Clockwork Orange remains viscerally disturbing, insightful, and ever more relevant as the decades pass. 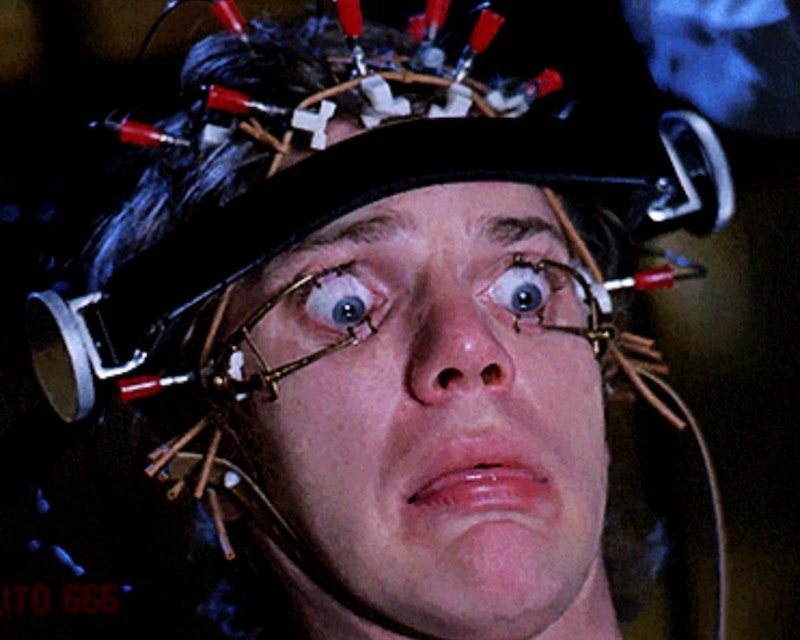 The first film in the Criterion Channel’s 1970s Sci-Fi collection, No Blade of Grass, has long fallen into obscurity. Exactly the opposite’s true of the second. Stanley Kubrick’s A Clockwork Orange is still watched, analyzed, debated, referenced, and used as decoration for dorm room walls.

I first saw it when I was 14 and my high school English class was studying the novel by Anthony Burgess. Between my age and the institutional imprimatur my school gave the film, I’ve never been able to see it as either rebellious or dangerous. It’s an excellent movie, though. Seeing it again in full for perhaps the first time in over 30 years, I was struck by how much of what’s most great in it isn’t what’s most frequently discussed.

To recap: the movie’s set a short distance in the future, in a decaying England where a young punk named Alex (Malcolm McDowell) wanders the streets with his three buddies, fighting and stealing and raping. Until he’s betrayed and arrested, and volunteers for an experiment aimed at eradicating criminal tendencies. Which leaves him in great danger as his past catches up to him.

Kubrick wrote and directed the 1971 film adaptation of Burgess’ 1962 novel. It was given an X rating (later edited by Kubrick down to an R; most currently-available versions of the film are the original, re-categorized as R). The violence and especially sexual violence provoked condemnation and death threats toward the Kubricks, and the movie was banned in a number of places—Ireland, South Africa, Brazil, the province of Alberta. Kubrick had it withdrawn from circulation in Britain in 1973. Still, in the wake of the film’s release there were sporadic attempts made to censor Burgess’ novel.

It’s worth noting that the events in the film are somewhat softened from the novel. Perhaps most notably, what in the film is a consensual sex scene between Alex and two adult women is in the book a rape of two children. Alex is older on screen than in the book, too, which has some thematic consequence. Burgess’ Alex is growing into adulthood; Kubrick’s Alex is nearly there. He’s disturbingly close to a finished product, which is why the experimental Ludovico technique he undergoes is so important. It’s not shaping a growing youth, but changing an adult.

The opening scenes of Kubrick’s film, filled with colorful fight scenes, with sadism and rape, with color and energy, tend to dominate discussion of the film. It struck me that the weirder second half of the movie is more important and perhaps finer. Conversations are allowed a measure of oddness and quiet. Minor characters—a prison guard incapable of talking at less than top volume, especially—are more vividly cartoony; the film as a whole has to be an influence on Terry Gilliam, or vice-versa.

But more importantly, it’s in the second half that the dramatic structure of the film becomes clear. The first half shows us Alex committing crimes while interpersonal tension with his gang builds up to the betrayal that leaves him in prison. It also shows his crimes getting worse, so that the first time we see him commit an actual murder is during the home invasion that ends with his capture by the cops.

I hadn’t noticed that, exactly, in previous viewings. The violence he metes out earlier in the film is so extreme you have to imagine that if he hasn’t killed anybody yet it’s only by sheer luck. But Kubrick’s clear about what he’s showing and when. Thematically, he’s also building up the idea of the interrelation of the drive to art, sex, and violence: it might be slightly symbolic that Alex bludgeons his victim to death with a statue of a penis.

But what happens next is the point. We’re used to stories about one man facing off against a corrupt system and corrupt society. Think of, say, Thomas More in A Man For All Seasons, or John Proctor in The Crucible. Kubrick uses that structure, but he’s made clear that his protagonist is as flawed as the systems he struggles with. Alex can’t stand prison society, so he volunteers for the Ludovico technique. That puts him back out into the wider society of the near future—where he can’t get away from his past actions.

An early scene with a probation officer turns out to foreshadow the core of the movie. Alex becomes a political pawn; used first by the left-wing opposition, and then, near the close of the movie, by the right-wing party in control of the government. But as he willingly becomes the center of a media circus it’s clear he’s using the government. He, as a corrupt individual, has been drawn to the power of the corrupt system. He’s been cured, all right. He’s got himself access to power. And he’s become a part of the problem, as he was perhaps always fated to be.

Without the violence of the first half, the second half makes no thematic or character sense. Without the set-up, there isn’t an arc to the movie. Seen as a whole, it’s a much darker take on growing up than Burgess’ novel. Burgess had Alex return to his old ways of street crime. Kubrick, ending the film where he does, implies Alex (again, older and more knowing than in the novel) is climbing up to another level of criminality.

Burgess concluded with a chapter excised from the American version Kubrick first read, in which Alex encounters former members of his gang who’ve moved on from violence and integrated into society. He starts thinking about doing the same, has a vision of himself as an adult, and when he sees an infant son in his vision realizes he’s growing up. The Alex of the movie is already grown up and has no hint of an interest in having a son. He’s interested in power, in bossing around his gang, in rape and drugs and ultra-violence. His problem with prison isn’t that it’s unjust, it’s that he’s not on top.

This is a movie that’s grown more relevant in the age of Trump and Brexit. When I saw it in the 1980s, both book and movie felt vivid and contemporary, to the point I was surprised when I found out when they both were created. Some of that’s a function of the influence both works had on punk. Some is how accurate the movie’s future felt: a decaying, increasingly violent urban wasteland. Times change; crime rates have dropped spectacularly over the last 30 years or so, Russia hasn’t influenced slang, and people are now less afraid of the young growing up to be violent fascists than they are—for some foolish reason—afraid of the youth being violently anti-fascist. But human corruption and political cynicism remain unchanged.