Jack Has Been a Bad, Bad Boy

David Lynch's new short film, What Did Jack Do?, is another gem from the living legend. 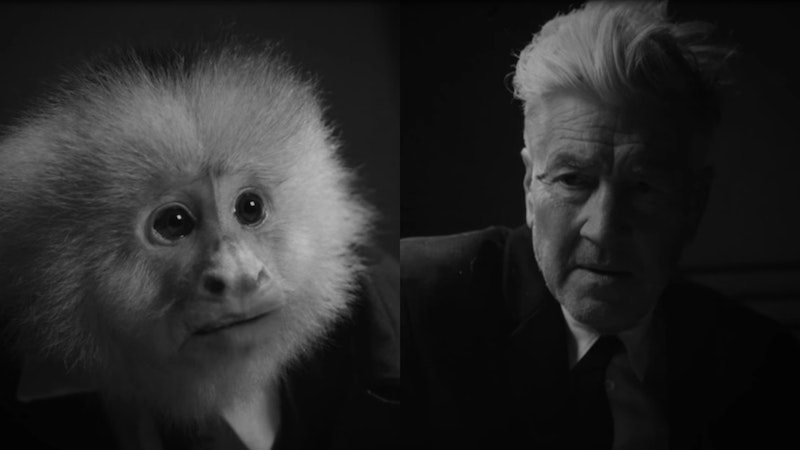 David Lynch strikes again. This time with a short film (17 minutes) titled What Did Jack Do?, which premiered at the Foundation Cartier pour l’Art Contemporain, and now available on Netflix. Even for a diehard fan of Lynch’s work, it’s always a surprise what he’ll come up with again, and Lynch certainly doesn’t disappoint. In fact, he’s given us a surrealist masterpiece in its most pristine and pure form.

Is it even possible to speak of plot when we look at Lynch’s films? Sometimes. Here, the action is a dialogue between a detective (Lynch himself) and Jack, who happens to be a monkey. Jack has been accused (and later charged) with murder of Max Clegg, and the Detective interrogates him as he tries to piece together a bizarre story of a monkey who fell in love with a hen named Toototabon. It’s a real monkey that’s sitting across Lynch in a set that suggests a train station. He does speak but with a crudely and primitively super imposed human mouth.

The film’s shot in black and white with a grainy quality reminiscent of silent cinema. Only half of Lynch’s face is illuminated, and his wild hair becomes one with the cigarette smoke he inhales and exhales. Jack the monkey is resistant to the questioning, and the dialogue mostly consists of every possible clichéd phrase found in American detective films from the 1930s and 1940s. But that’s one of the charms of the film. The cliché must be taken seriously because Jack has to face justice.

This dame in question, this woman… wait, chicken scratch that… this hen is love of Jack’s life, and we find this from the poetic eloquence of Jack’s description of his tough life. He admits that he has never been with a chicken before and what the Detective will never understand is the beauty and wonder of touching Toototabon’s full breasts under those feathers. Apparently, this was a transformative experience for Jack.

Jack tries to evade the questions, but the Detective doesn’t give up. “We have Sally,” says the Detective. Sally will provide further proof that Jack killed Max Clegg. Jack responds, “Who’s gonna believe an orangutan?” This and many other moments (such as the Detective aggressively asking Jack whether he is or has “ever been a card-carrying member of the Communist Party?”) are humorous but, at the same time, it has an air of surrealist disturbance.

Jack’s cocky for most of the interrogation. He makes a point that he ordered a cup of coffee 30 minutes ago (the waitress eventually brings a cup of black coffee); he tries to psychologically belittle the Detective as well as prove his love for Toototabon by breaking into song. But then things turn into a nightmare. Out of nowhere, Toototabon appears and Jack loses all composure and smugness, and screeches as any overly aggressive and distressed monkey in the jungle would. But this isn’t an ordinary jungle monkey. This is Jack, a creation of Lynch’s mind, and the scream transcends the primate quality and becomes a reminder of Naomi Watts screaming in Mulholland Drive (2001), or Bill Pullman’s seizure-like agitations in Lost Highway (1997).

What Did Jack Do? goes back to Lynch’s roots. It’s mostly suggestive of Lynch’s first feature-length film, Eraserhead (1997). The choice of black and white is the most obvious similarity. But there’s also the monkey’s song, which is evocative of Lady in the Radiator singing “In Heaven.” The songs in Lynch’s films are almost always about longing for a better reality than the awful circumstances characters find themselves in. But one can also see the elements of Lynch’s early short film, The Amputee (1974), in which Lynch plays a nurse.

Jack the monkey is, in many ways, re-animated Jack Nance, a regular actor in Lynch’s films. The vocal delivery of Jack the monkey channels Nance’s spirit, whether as Henry Spencer in Eraserhead, Paul in Blue Velvet (1986) or Pete Martell in Twin Peaks (1990). The delivery is always slow but Jack Nance always brought forcefulness to the slow pace—he’s a character metaphysically imprisoned, trying to gain freedom while at the same time imposing his powerlessness and masquerading it as power.

What Did Jack Do? ends with a note of justice. Jack is charged and cuffed. We imagine that the end for him won’t be pleasant. The train station room remains empty, intact, with only cold coffee on the table. The only mystery that remains to be solved is whether that was “a damn good cup of coffee?”