The Gentlemen—with gunfire dialogue and a great cast—isn’t a dumping ground movie. C+ 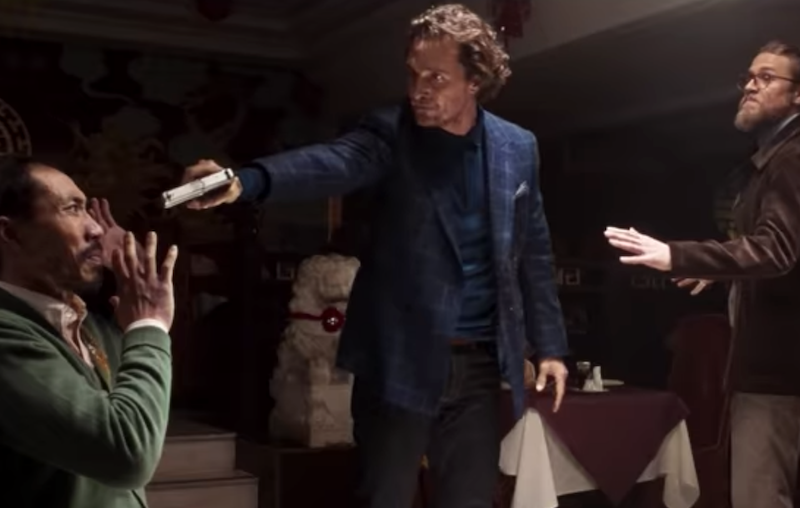 I remember Guy Ritchie not for his films, but for his appearance on The Joe Rogan Experience in May 2017. He was promoting King Arthur: Legend of the Sword, but he spent most of the time talking with Rogan about how to dress like a proper gentleman. There are notes about knots, questions about pocket squares, and the spiritual endorsement that a sharp-dressed man brings himself just by dint of being proper and crisp. This, of course, extends to how one makes one’s drink, and what that drink may be: single malt scotch and ice? Two cubes? No, not quite James Bond. They barely talked about King Arthur—more “what makes the man,” what the life of a director is actually like, his beginnings, and the dozens of tangents you can expect in a 105-minute interview with a perma-stoned benevolent ape like Rogan.

Ritchie’s fun to listen to, and so are the people in his films. Ever since he got burned by Swept Away in 2002—a vanity project for his then-wife Madonna that was eviscerated by a jealous and contemptuous press and public—he’s taken on many franchise jobs in the two decades since Lock, Stock and Two Smoking Barrels and Snatch: an awful Sherlock Holmes in late 2009 (and a 2011 sequel), a middling take on The Man From U.N.C.L.E. in 2015, and—Good lord—Ritchie directed the 2019 Aladdin? No wonder he cares more about pocket squares than the punters that populate his movies. The Gentlemen is his latest, a “return to form” that stands as a perfect example of what that phrase means: familiar, good, but not great, not anywhere close—and, the vague but overwhelming sense that this “return” signals the death of something with more certainty than any career criss-crossing could.

I don’t agree with Splice Today contributor Stephen Silver that the movie is a mess, but I think he’s dead on here: “This plot is difficult to follow, but once again, it doesn’t matter. You’re here to see actors you like delivering over-the-top performances. McConaughey doesn’t stray far from his standard on-screen persona, but Farrell, Golding and Grant are clearly having the time of their lives playing against type. I’m not quite sure, though, why Jeremy Strong plays his part as flamingly gay, when his character has a wife and his sexual orientation never figures in the plot.”

The plot is immaterial and really doesn’t matter because Ritchie’s appeal is his dialogue. Criminal kingpins, mercenaries, arrogant upstarts, junkies, and common thugs are as familiar and reliable as awkward first dates and asshole exes in a romantic comedy. Ritchie’s always fun, and unlike so many Americans, he understands how to mix humor and drama—suspense, action, violence, trauma of all kinds—and pull it off. Like Hitchcock, Ritchie revels in the haplessness inherent in crime and sabotage, and that means much more to me than brilliant plots or complete comprehension of every last detail. I don't care, I had a good time. Losing track only becomes a problem when you’re bored. Compare this to a totally drab and forgettable girl power crime film like The Kitchen from last summer. This is a masterpiece next to that, or War Dogs, the other “serious” movie Todd Phillips made before Joker.

How many people will even see The Gentlemen in general release? It's out in theaters when people aren’t paying attention or are still catching up on award winners and word-of-mouth-hits. Movies are mostly terrible for a solid two months. Ritchie can slip his sensibility into King Arthur, but why is he doing Aladdin with Will Smith? Why is The Gentlemen dumped in the dead zone of distribution when everyone is still talking about movies like Parasite and Joker that came out months ago?

It’s the material: The Gentlemen is surprisingly wanton and proudly “un-woke” in its regular racial jokes. This isn’t a racist movie, everything in it would’ve been acceptable at every corporate level just five years ago, but in January 2020, it was mildly jarring to hear “Chinaman” played for laughs—and succeeding. Ritchie shoots in (almost) every direction, and really if you wanted to litigate a harmless movie like The Gentlemen for its racial insensitivity, you should start with the toxic cock-swinging culture of masculine pride and immaturity on display here that causes so much more immiseration than jokes about fortune cookies.

Ritchie recently wrapped a new film called Cash Truck, another proper crime film starring Jason Statham. Keep him in the Kingdom. Guy, if you're reading this during a shoeshine, please delete Will Smith and Bob Iger’s phone numbers immediately.