I Wanna Be Your Dog

Rock & Rule is a bizarre animated "punk musical" from 1983 worth checking out. 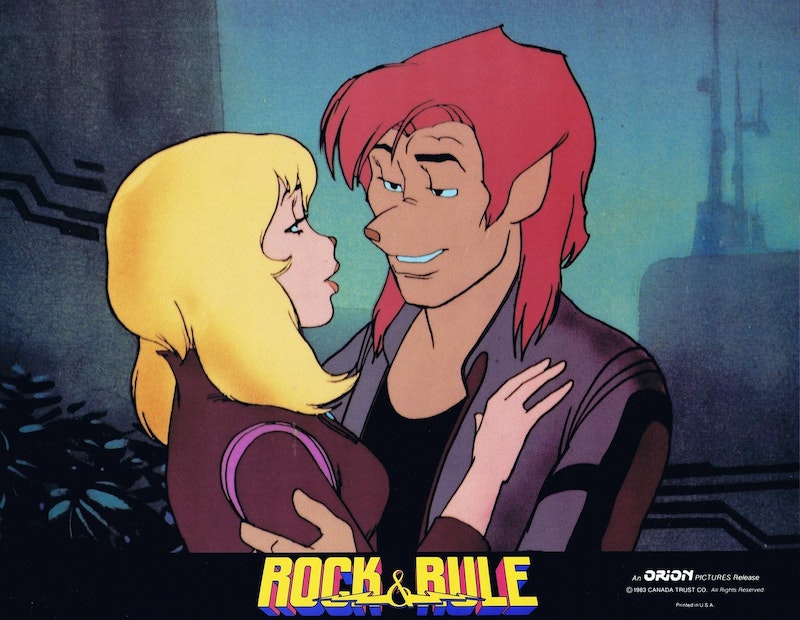 If Don Bluth and Ralph Bakshi made a movie together, it would be the obscure 1983 Canadian animated film Rock & Rule. The first full-length feature film from Nelvana—best known for such 1990s Saturday morning cartoons as Beetlejuice, Eek! The Cat, and Tales from the Cryptkeeper—Rock & Rule is a sci-fi rock musical that combines great animation with a soundtrack that includes songs from Lou Reed, Debbie Harry, Cheap Trick, Iggy Pop, and Earth, Wind, and Fire. It bombed at the box office because MGM distributed the movie to just a few theaters in Boston, but it slowly gained a cult following through HBO. The film has since been released on DVD and uploaded multiple times on YouTube, so now animation buffs can finally see one of the most captivating animated movies ever.

The story takes place in a post-apocalyptic world populated with mouse/dog/human hybrids that look like extras from A Goofy Movie. The heroes are members of a fledgling rock band that include egotistical lead singer/guitarist Omar, strong-willed keyboardist Angel, dimwitted bassist Stretch, and nerdy drummer Dizzy. One night during a gig, failing rock star Mok is in the audience looking for a singer who has the right vocal range to open a portal and summon a demon to revise his career, and Angel has just the right voice. Mok invites the band back to his mansion where he kidnaps Angel, and now the band must rescue her before it’s too late.

According to IMDB, the animators filmed live actors to capture the right movements for the band’s performance sequence near the beginning of the movie, which would explain why Omar and Angel’s movements are so lifelike. I don’t know if they were rotoscoped or if the animators were just that talented, but the animation is amazing. The animators also used several interesting special effects for particular scenes: cotton balls for clouds, cigarette smoke for fog, and computer animation for Mok’s computer.

Besides the animation, the movie has a winning soundtrack that’s out of print due to a fire destroying the master tapes. The Cheap Trick tracks are okay, but tracks by Debbie Harry, Lou Reed, and Earth, Wind, and Fire more than make up for it. “Angel’s Song” and its reprise “Send Love Through” were written and performed by Harry, and they were later reworked as “Maybe for Sure” on her 1989 solo album Def, Dumb, and Blonde. Earth, Wind, and Fire’s “Dance, Dance, Dance,” used for the nightclub sequence, is catchy as hell. My favorite one, though, is the villain’s theme song “My Name is Mok,” written and performed by Reed. While most of the songs from the soundtrack have been released publicly in some form or another—Cheap Trick’s songs can be found on the Sex, America, Cheap Trick compilation—the full version of “My Name is Mok” can only be found in various YouTube videos with shitty audio.

The film has some minor flaws. Omar’s cynical attitude makes him an unlikable protagonist, even though he changes at the end. Also, we never learn how a demon will help Mok’s career. Overall, though, Rock & Rule is a delightful experience.