Blokes on the Go

Guy Ritchie's take on a busy, rambling ensemble movie like Inherent Vice is mostly a mess, but entertaining nonetheless. B- 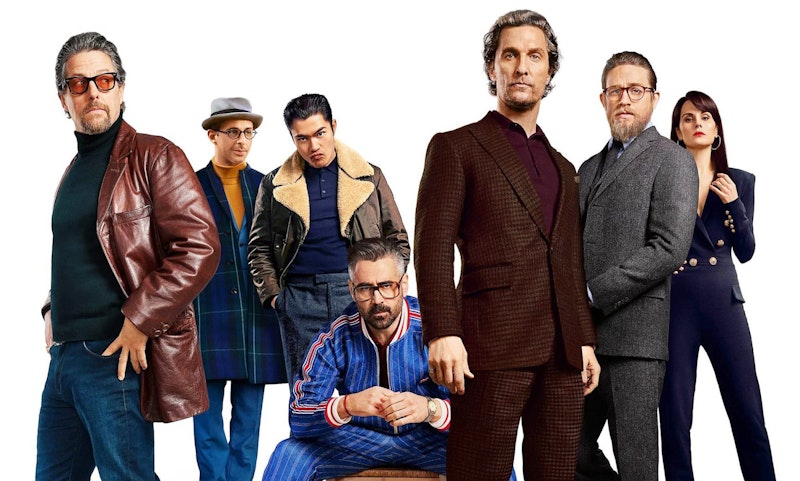 After an eclectic recent career that culminated last year with that bizarre Will Smith Aladdin remake, director Guy Ritchie returns to his British crime roots with The Gentlemen. The movie’s a mess, but an entertaining mess.

There are two major things that separate The Gentlemen from Ritchie's early efforts Lock, Stock and Two Smoking Barrels and Snatch: An overqualified cast full of stars, and a plot that's bizarrely convoluted, complete with multiple framing devices and a fair amount of unreliable narration.

Call it Ritchie's Inherent Vice: A film with a needlessly complex, practically nonsensical plot, which is mitigated a bit by the plot not really mattering, because the focus is more on witty dialogue and character work. And that seems to be intentional, as The Gentlemen uses the song "Vitamin C" by Can, which played over the opening credits in Paul Thomas Anderson’s film.

Matthew McConaughey stars as Mickey Pearson, an American who has gotten rich by cornering the market on marijuana in England, through a scheme that entails paying off minor royals for the right to grow weed on their land. Mickey has decided to sell his lucrative business and retire, which draws interest from both a Jewish billionaire (Succession's Jeremy Strong) and a Chinese gangster (Crazy Rich Asians' Henry Golding.)

The main framing device has private investigator Fletcher (Hugh Grant, amusingly overacting) trying to sell a screenplay based on the plot of the movie to Mickey's right-hand man (Charlie Hunnam.) The screenplay-within-the-movie, in a nod to the early Ritchie picture Snatch, is titled Bush.

Also figuring in the plot is a crew of amateur boxers who use GoPro cameras to record viral rap videos of themselves committing robberies, with a delightfully pugilistic Colin Farrell playing their trainer. There's also Eddie Marsan as a tabloid honcho whose name is "Big Dave" and Downton Abbey's Michele Dockery as McConaughey's wife, who gets little to do besides execute a Chekhov's gun device with probably the smallest such gun in the history of movies.

This plot is difficult to follow, but once again, it doesn't matter. You're here to see actors you like delivering over-the-top performances. McConaughey doesn't stray far from his standard on-screen persona, but Farrell, Golding and Grant are clearly having the time of their lives playing against type. I'm not quite sure, though, why Jeremy Strong plays his part as flamingly gay, when his character has a wife and his sexual orientation never figures in the plot.

Other virtues are a handful of action sequences that are both creatively assembled and funny, and dialogue that's consistently hilarious. Other aspects are a bit iffy. This is a film that thinks it's funny to name an Asian character "Phuc." There's a moment of sexual violence against women that's more than gratuitous, and one plot twist seems lifted directly from a famous Black Mirror episode. Also, there's an in-joke reference to Harvey Weinstein that lands with a thud (the film was produced under the banner of Miramax, which is now on at least its second owner since the Weinsteins sold it.)

Also, there's a great movie still to be made about the natural tension between modern-day legal cannabis entrepreneurs and traditional stoners/drug dealers, but aside from a couple of lines of dialogue, The Gentlemen doesn't quite explore that. McConaughey does, however, make an impassioned speech that unlike heroin, the stuff he sells doesn't ruin lives.

The Gentlemen is far from groundbreaking, world-changing cinema, but it's a fun crime romp featuring one of the year's best casts.