Nicolas Cage delivers a subtle, subdued, but uneven performance in Color Out of Space. B 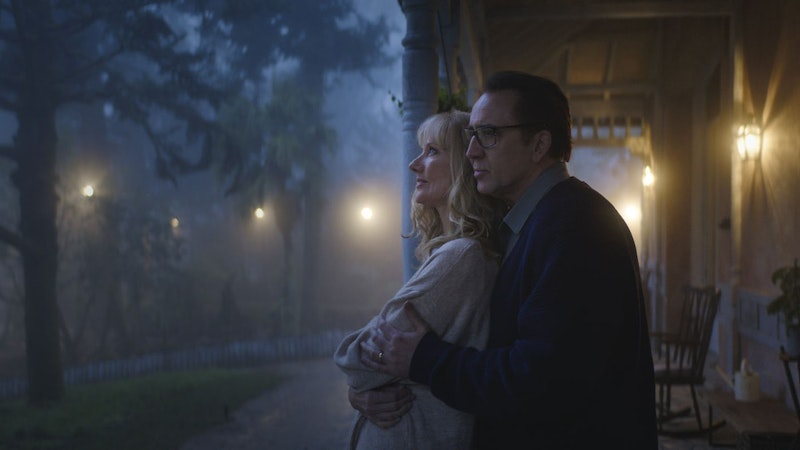 For its first half, you get the sense that Color Out of Space is going to be one of Nicolas Cage's more subdued performances, as he appears to be a quiet father living a quiet life out on a farm, after his wife has survived breast cancer.

But then a meteor strikes, and with it an alien glow, and Cage trades in his subdued dad act for something that's likely going to provide plenty of material for the next edition of the "Nicolas Cage Losing His Shit" montage.

The film, directed by Richard Stanley, is based on a Lovecraft short story from the 1920s, and has a familiar structure: Cage, along with his wife (Joely Richardson) and three children, have moved out to a farm in the small town of Arkham, MA. One night, a meteor crashes there, which causes a strange purple light to shine—and also for all of the survivors, both human and animal, to lose their minds. It's structured kind of like The Shining, in which isolation combines with other, supernatural factors to cause a patriarch to slowly grow mad.

If Crazy Cage is what you're looking for, that's what you'll get as the film goes on. Cage at times sounds like he's doing an impression of himself, while at other times he sounds like Donald Trump, or possibly Alec Baldwin doing Trump, although he's supposed to be channeling his own father. Whatever voice he's doing, some of his line readings are fantastic. Hearing Cage yell, "They are alpacas!" is almost worth the price of admission by itself.

Beyond Cage, Madeleine Arthur (from Tim Burton’s Big Eyes) is the standout in the film, playing his Wiccan daughter, who's got the sort of creepy presence that's just right for the material. The long-MIA actress Q’orianka Kilcher, from Terrence Malick's The New World, resurfaces here as the mayor of the town. The other highlight of the film is Tommy Chong who waltzes in, shirtless, with a cat named "G-spot” and delivers a couple of memorable monologues.

Stanley, the director, is making his first film since he was fired as director of 1996's Val Kilmer/Marlon Brando notorious version of The Island of Dr. Moreau, and replaced by John Frankenheimer. Color Out of Space is one of two films that played at last year's Fantastic Fest in which there's a horse named Comet, although in this one, unlike The Death of Dick Long, there's no bestiality involved.

Are we in the midst of a Cage resurgence? He's probably not headed back to the A-list, but the actor continues to do interesting work, sometimes scream-filled and sometimes not, in smaller movies like Mandy, Army of One, and Primal. He's set to play himself in an upcoming film called The Unbearable Weight Of Massive Talent. It’s easy to imagine Color Out of Space emerging as a cult hit.