A Blumhouse Film for Everyone

The low-budget branding of anti-branding. 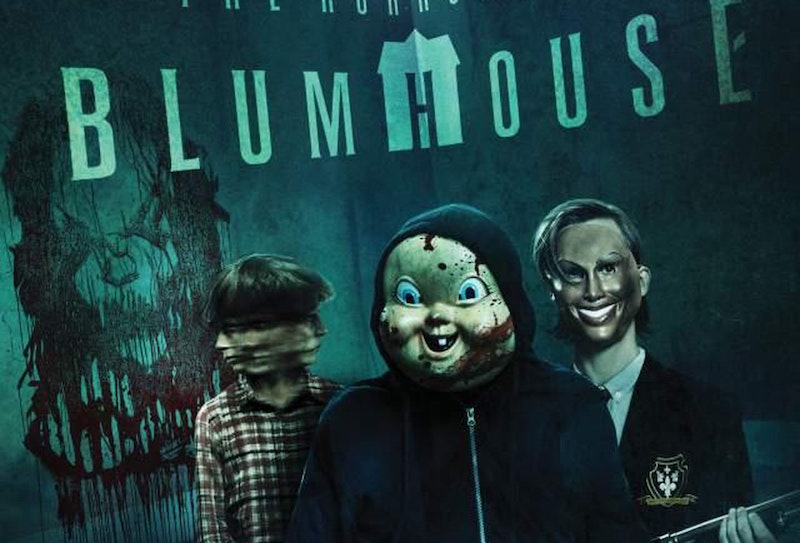 I've been watching Blumhouse films for several months now, and have seen perhaps a dozen of the studio's movies. I should be in a good position to summarize the studio's house style.

But if there’s a house style, I haven't pinned it down. Blumhouse has a consistent production method; it makes cheap horror and suspense films, which allows it to recoup its investment with even a modest box office take. The prime example is Paranormal Activity (2007), a film made for $350,000 that grossed $193 million, and is by some measures the most profitable film ever made. Paranormal Activity was a canny entry in the found footage genre—it's filmed by its characters, who carry hand-held cameras or set up security cameras to film themselves as they sleep. Found footage is supposed to look cheap, and so it has an obvious appeal to a low-budget studio.

Paranormal Activity generated a series of direct sequels, but it also inspired Blumhouse to make many more films in the found footage genre, including Creep (2015) about a videographer stalked by a guy in a wolf mask, and Unfriended (2014) that shows only footage of computer screens, as a friend group is haunted by a ghost on social media.

But while found footage has been good to Blumhouse, the studio hasn't limited itself to the genre. Movies like The Lazarus Effect (2015) and Split (2016) are slick, Hollywood-ready efforts, with name actors and expensive special effects. Other movies, like Truth or Dare (2018), are neither well made nor found footage grimy; they're merely amateurish.

If there's no one visual look to Blumhouse, is there a consistent narrative approach? Critic Sean Guynes-Vishniac has characterized Blumhouse as "up-beat horror," and it's true that some of the films have happy endings. The Halloween reboot that Guynes-Vishniac reviews is an empowering feminist take on Laurie Strode's decades-long battle with Michael Meyer. Happy Death Day (2017) uses a Groundhog Day timeloop to mash up the romantic comedy and slasher genres.  But those cheerful narratives are balanced by bleaker fare. Upgrade (2018), for example, is efficiently, chillingly grim—all the main characters die horribly, and the movie ends with an emotionless machine preparing to murder everyone on earth. Paranormal, Unfriended, and Creep all end with the monsters and evildoers victorious as well. And while Get Out (2017) is a horror/comedy with a nominal happy ending, its stark depiction of racism doesn't send you out of the theater with a song in your heart.

Some critics have argued that Blumhouse is "high concept horror." The Purge movies, set in a future dystopia where laws are suspended for one night a year, might fit that description. But "high-concept" is grandiose for Curve (Die Hard in an overturned car or Happy Death Day (Groundhog Day but a slasher) or Hush (a deaf final girl) or Cam (https://www.splicetoday.com/moving-pictures/which-camgirl ) (a horror film about cam girls.) Those aren't "high-concept horror"; they're at best "elevator-pitch horror." A lot of Blumhouse films are little more than gimmicks; movies designed around their own publicity blurbs.

We're in an era when a lot of movies don't even have clever publicity blurbs. Big Hollywood action movies are generally just vehicles for legacy properties. "It's a horror film about a haunted Facebook page!" isn't a genius idea, but it’s an idea, in contrast to, "another film about Spider-Man," or "an adaptation of this YA novel series."

As the reboot of Halloween shows, Blumhouse has made some legacy films. But the reason the studio is so hard to pin down is that it's mostly focused on new fare, which sell (or don't) on the basis of whether the (often trashy) idea can hook you in. Blumhouse films aren't all smart or gripping. But they all feel like they started with some person trying to come up with an interesting idea, which means that they at least have the potential to be individual, smart, and gripping.

When you go into an MCU or James Bond film, or really any Hollywood action movie, you know exactly what you're going to get. With Blumhouse, though, you're never sure whether the movie you're watching will be slick or gritty, arty or trash, upbeat or ugly. The studio is still embedded in some hoary Hollywood traditions, unfortunately—they haven't hired any women directors for their horror movies yet. But in other respects, the studio's hallmark isn't any one style, but consistent inconsistency. In a media landscape increasingly obsessed with branding, Blumhouse has succeeded by taking care that there is no typical Blumhouse film.