Hush is a well-made film, for better and worse. 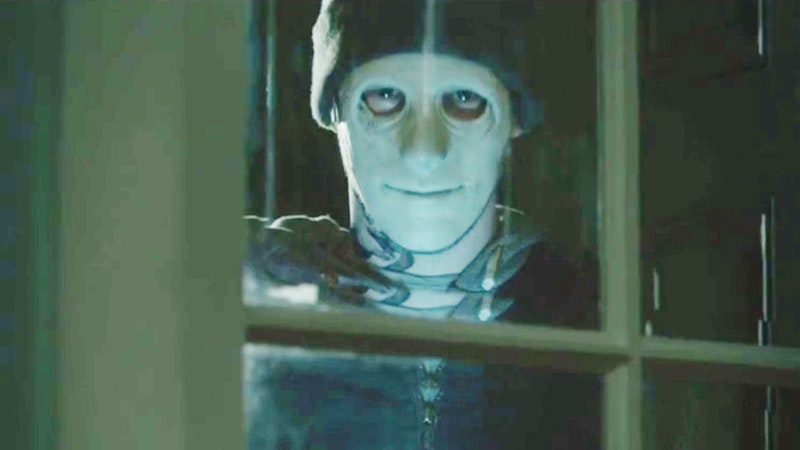 This is part of a series on Blumhouse horror films. The last entry on Alien Skies is here.

Most low-budget Blumhouse horror films are somewhat messy. They often have a cobbled-together feel as if the writers and directors and actors didn't have enough time or money to plan out scenes in advance. But Hush (2016) is an exception. It's an efficient and clever thriller, which unfolds with a preordained inevitability. Director Mike Flanagan and his wife, co-writer and star Kate Siegel, know exactly where they're going and how to get there. As a result, Hush is one of the most critically successful films in Blumhouse's catalog. It's also in many ways one of the least interesting.

Hush is a home-invasion slasher with a twist—the protagonist Maddie (Siegel) is deaf. As Flanagan is aware, slashers are built around power reversal; the terrifying, invulnerable antagonist wreaks havoc upon helpless protagonists, until the final act, where the tables are turned and the weak rise up to triumph in rage and blood.

This is why the final girl in a slasher is a girl. Women are stereotypically (and often physically) smaller and weaker than men, so there's a greater rush when they unexpectedly pick up the knife and do unto those who have been doing unto them. Adding disability to gender is a way to up the odds even further, and the film inventively capitalizes on Maddie's lack of hearing to highlight her vulnerability. The nameless home invader (John Gallagher Jr.) taps on glass when Maddie is turned the other way, mocking her. He walks behind her freely as she's on her computer, knowing she can't hear and won’t discover him. And towards the climax of the 82-minute run time he slides into place behind her through a window to deliver the killing stroke, as she holds a knife watching the wrong door. Her deafness gives him power—until it doesn't.

Deafness also becomes a metaphor in the film for disconnection. After a bad break-up, Maddie moved to a house in the woods removed from civilization. Though she's gone away to work on her novel, she points out to her sister via facetime chat, "I didn't choose isolation"—isolation, she implies, chose her when she contracted meningitis in her teens. The small cast (only three actors in the film besides Maddie and her assailant) and the restricted set (just the house) emphasize Maddie's constriction. Hearing loss, location, and plot, all conspire to cut her off from aid.

The claustrophobia is the carefully orchestrated point of the film—but it's also a limitation. Blumhouse productions like Truth or Dare are a welcome respite from mainstream big-budget films because they aren't constrained by expectations. Once they check a few exploitation boxes for violence and sex, they can go anywhere, exploring uncomfortable issues of abuse and violence, or ambivalently suggesting that their protagonists may not actually be protagonists at all. It's not an accident that Hush has a happy ending, though many Blumhouse films don’t. A well-made action film is supposed to tie up loose ends, resolve its plot, finish off its villain, and crown its hero. If you're going for quality, there are a lot of requirements.

Hush is a careful and parsimonious film. Details highlighted in the film's first 15 minutes—a neighbor's cellphone nestling in her back pocket, a flashing extremely loud fire alarm, Maddie's writerly penchant for thinking through different endings—all resurface over the course of the rest of the film. Details are provided for a reason; your experience in the film is curated.

The film’s also careful to keep its cleverness within marketable boundaries. It plays with noise and silence a little bit early on, amping up the sounds of Maddie cooking, and then cutting them out abruptly. But director Flanagan doesn't take the obvious, potentially alienating step of having the entire film, or large sections of it, presented from Maddie's point of view, with no sound at all. On the contrary, Flanagan at the end of the film has Maddie engage in an audible internal dialogue with herself, giving her a voice to make sure the hearing audience can follow her thought process and the plot.

The formal cautiousness is mirrored by narrative circumspection. We don't ever learn why Maddie broke up with her boyfriend, nor do we learn much about her background or personality. The serial killer's motivations are less clear. Why is this bearded hipster asshole wandering around the neighborhood killing people? Some slasher antagonists like Michael Meyer and Jason are presented as forces of nature; invulnerable unstoppable nightmares. Others, like Buffalo Bill or Norman Bates, have complicated memorable pathologies. But the bad guy in Hush isn’t mythic, or specific. He just fills the space reserved for "slasher villain," as if the filmmakers didn't want to risk upending their perfect mechanism by making one of the pieces too idiosyncratic.

Hush is a good film. It has smart ideas; it knows how to tell a taut story within its budgetary constraints. It has listened to the market, its audience and the critics, and it has given each what they want. Sometimes perfect hearing can be a limitation too, though.