An ugly, disjointed film, one which tries ambitiously to juggle heavy ideas but never gets a handle on any of them. C- 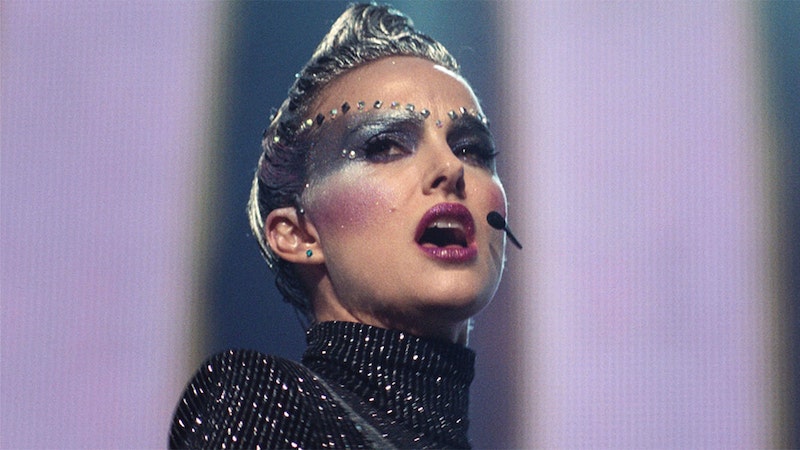 I saw Vox Lux at the Philadelphia Film Festival in late October. The screening of the film, which opens with a Columbine-like mass shooting, took place just hours after the Pittsburgh synagogue shooting. The head of the festival addressed the theater, and announced that anyone who found themselves bothered by the film's subject matter was offered a refund.

The film arrives in theaters this week, and somewhat surprisingly, there hasn't been another high-profile shooting that has necessitated pushing back its release date. I'm not so bothered by the images in the film itself, but I do object to the way it vultures off of real-life tragedy, from school shootings to the 9/11 attacks to the bombing at the Ariana Grande concert in Manchester. Vox Lux is an ugly, disjointed film, one which tries ambitiously to juggle heavy ideas but never gets a handle on any of them.

Vox Lux, directed by former actor Brady Corbet, is two different movies, with wildly divergent tones. The first half tells the story of Celeste Montgomery (Raffey Cassidy), a teenaged girl who survives a Columbine-style school massacre in 1999. With the help of her sister, Celeste recovers from her injuries and goes on to write and sing an inspirational song as a tribute to her fallen friends. With an assist from a sleazy-seeming manager (Jude Law), that song leads her to become a famous pop star.

The second half is set in the present day, as Celeste is now played by Natalie Portman as a troubled, drug-addled and uncommonly abrasive pop star, complete with an aggressively ostentatious Staten Island accent. She’s preparing for a comeback concert, following one of those multi-stage celebrity meltdowns.

Cassidy, who played the younger Celeste in the early scenes, is now Celeste’s teenaged daughter (raised by the sister, played by Stacy Martin), while Law’s slimy manager is still hanging around even though he probably shouldn't be, given the denouement of the first act. Jennifer Ehle has a relatively thankless part as a publicist.

Judging by her musical stylings and costumes, modern-day Celeste is some combination of early Lady Gaga, "Erotica"-era Madonna, and Sia, who actually wrote the (not very good) songs Celeste performs in the third-act concert sequence. These scenes incongruously locate a fancy, Madison Square Garden-like arena on Staten Island.

There are bad decisions here. Portman isn't the right age in the present day to line up with how old she was in 1999, while we remember what Portman looked like in 1999, and it was nothing like that. There's a distracting, unnecessary voice-over narration by Willem Dafoe, who's there to explain the various subtexts that are already obvious. And while the concert scenes are well-staged, the songs suck.

But the biggest problem in Vox Lux is that it piggybacks off of real-life tragedy without really earning it in any way. It's clear that these characters have been through terrible traumas, which explains a lot about how they ended up the way they do in the contemporary scenes.

The film doesn't have anything new or interesting to say about those specific tragedies, or about the nature of trauma in general, nor about pop music or celebrity. Corbet seems content to just throw these heavy ideas into a stew and declare, "This is all fucked up!"

Ironically, Portman was originally set to play a young Ruth Bader Ginsburg in this month's biopic On the Basis of Sex, but was replaced by Felicity Jones, the British actress, who in that film attempts RBG's Brooklyn lilt, with only intermittent success. In Vox Lux, for all its other failures, Portman at least shows she can consistently keep up an outer-borough accent.

Aside from the accent, Portman’s performance feels at most times like a louder and meaner rehash of her Oscar-winning turn in Black Swan, when she also played a troubled performer, although the earlier film was much better.

Alex Ross-Perry's 2019 release Her Smell, which I saw on the same day at PFF, features Elizabeth Moss in a much more lived-in portrayal of an out-of-control female rock star. That film is also hard to watch at times, but unlike Vox Lux it successfully brings its themes together in the end.