On Divide and Conquer, an excellent new documentary on Fox News founder Roger Ailes. B+ 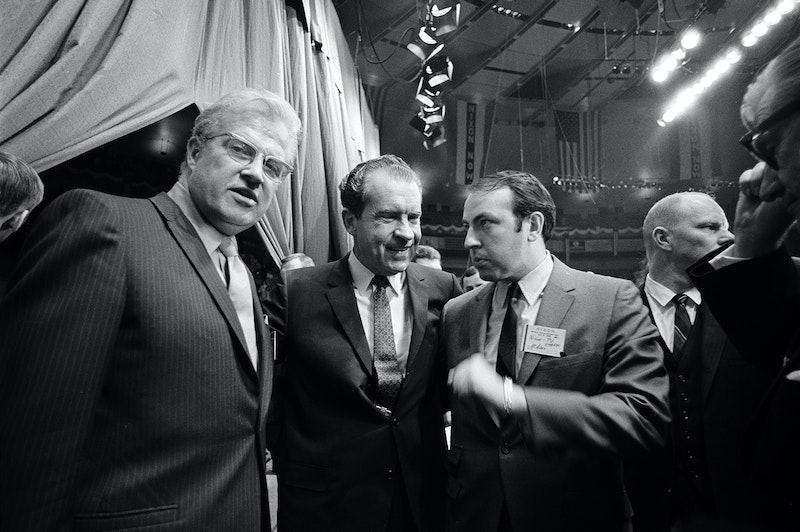 Early on in Divide and Conquer: The Story of Roger Ailes (a new documentary by Alexis Bloom), a former colleague brings up a passage from Ailes’ autobiography: when he was a boy, his father came into his room, opened his arms, and asked young Roger to jump off his bunk bed. Roger jumped and his father backed away, allowing his hemophiliac son to fall face first on the floor. “Never trust anyone,” he told his son. Toward the end of the film, it’s pointed out that this is a common anecdote, cookie-cutter for many celebrity biographies. A story meant to explain or justify one man’s bottomless paranoia and insecurity. Well, Ailes said his brother was in the bottom bunk at the time, and his brother denied it. But in Ailes’ mind, this slice of life would make sense to so many Americans who grew up in a similarly abusive and bigoted household.

He was right, and as one interviewee says about Ailes’ time running Fox News: “There were a lot of people smarter than Roger there. But no one as canny as him.” Ailes was not alone with his persecution complex, delusional fears, and boogeymen: at the height of his influence, he was convinced that “gay terrorists” were coming to kill him, that he was second only to the President on Osama Bin Laden’s personal kill list, and that anyone that looked even remotely Middle Eastern and worked at Fox was coming to get him. He had doors made of reinforced steel installed, and (perhaps taking a cue from NBC and Matt Lauer) a button to lock himself in his bunker of an office should the Rainbow Coalition or the Pride Parade come shouting for his head.

It becomes clear why Ailes and Richard Nixon worked so well together: though they were of different generations with different strategic philosophies, they were convinced their whole lives that someone, or everyone, was out to get them, to kill them. Ailes saw the power of television and telegenic candidates long before anyone else did, and more importantly (and tragically), how fear and outrage were what kept people reading and watching. Bloom dives into Fox News archival footage from the Monica Lewinsky scandal, the rise of the Tea Party, and the endless insistence that Barack Obama was not only black, but Muslim as well, and that he was intent on destroying America.

Bloom lets the footage do the work and the film stands alone this year as the only documentary that didn’t further sensationalize an already juicy story or lead the audience around for 90 minutes and end on an ambiguous note. Ailes died before Harvey Weinstein was taken down and #MeToo began, but he and protégé Bill O’Reilly led the charge in ugly old white men being fired for the exact kind of morally bankrupt licentiousness that they regularly railed against.

Divide and Conquer may strike some as perfunctory and abbreviated, skipping over huge chunks of Ailes’ life and moving at such a brisk pace. But unlike a recent spate of successful documentaries—Won’t You Be My Neighbor?; RBG; Love, Gilda; and Three Identical Strangers—Bloom’s film never gets schmaltzy or patronizing, despite featuring interviews with some of the women that Ailes left broken and torn in his wake. There are a few “cry pauses” which are a drag, they are unnecessary. But Ailes’ legacy speaks for itself: it is one of violence, hate, and pain. Bloom simply goes through and shows him for who he was: an abused child that became a monster and one of the most powerful men in media, and by Ailes’ own exaggeration, the world.

The first half of the film, a brief overview of Ailes’ first 40 years and into his first television channel, America’s Talking, was insightful and full of material that most people don’t know about the man who would help shape modern American conservatism. But, as always, nothing better explains Ailes’ sick disposition than his relationship with his parents: his father the Greatest Generation abuser, and his mother the carrier of the hemophilia Ailes described as “walking around with a time bomb all the time.” He had no affection for his mother because he blamed her for his weakness; his father gave him hate, mistrust, fear. And here we see the seeds of Trumpism—but again, Bloom deftly sidesteps the President, only circling back to him in the film’s final act, and in a remarkable final shot taken directly from top propaganda outlet Fox and Friends. Bloom’s film isn’t one to miss if you have even a passing interest in American politics.