The Front Runner Is Dead on Its Feet

God, what a boring film. 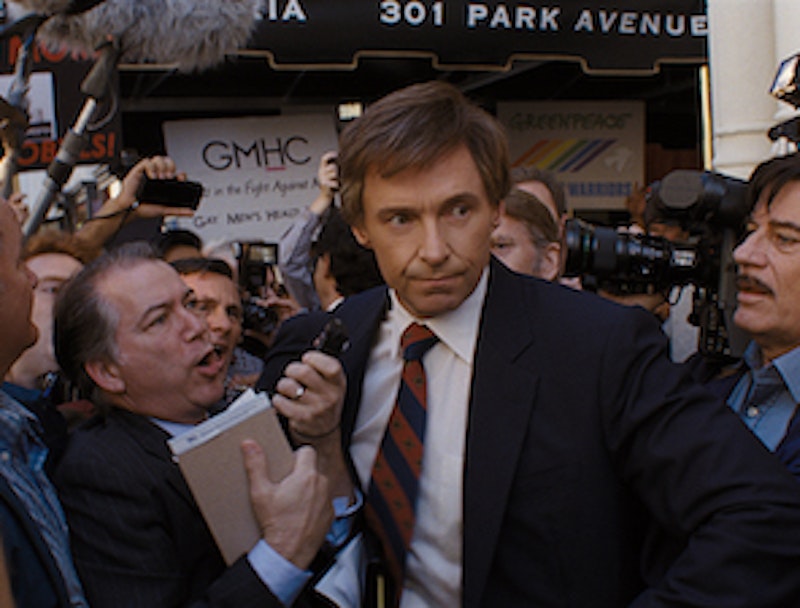 There’s poignance to experiencing the quick, well detailed, crackling pans and tracking shots of The Front Runner and then realizing that, despite them, the movie is a zombie and a bore. First, it suffers from star vacuum. Hugh Jackman, as Gary Hart, has a face kind of like Rowan Atkinson and kind of like a blunt object. His haircut appears to have been clapped on top of his head, and I think he was lashed into his suit. Second, the script is nowhere: Hollywood looks a big issue straight in the knees while the story dies. After that there really aren’t any problems. Eric Steelberg’s cinematography is on the heavy side but rich, and it skillfully underlines the compositions that set off Front Runner’s foreground action. J. K. Simmons is good as the crusty political operative who gives putdowns. Everyone else is good. (All right, Alfred Molina isn’t my idea of Ben Bradlee.)

It’s just that Front Runner has a hole at the center. That’s the fault of Philip Reitman, the film’s director and producer. He’s also the man responsible for the movie’s remarkable background material. If a cartoonist had drawn the crowded, varied tableaux that make up much of the film, we’d consider that person a master of form and observation. Reitman drew those tableaux with people, as it were, and that makes him even more remarkable. But otherwise what a zero he lays down. The Front Runner tells us that handsome men who are being high-minded shouldn’t be asked nasty questions. This message crawls by while people fuss at each other. Scenes filled with savvy journalists and operators usually can’t help being interesting, what with the chance for rat-a-tat and wisecracks. Well, Front Runner has a ton of them, but to no avail. Crackle doesn’t help if a scene can’t put its shoulder to the wheel, and here the wheel is missing. I’m not sure what the story was, except that the Donna Rice scandal took place and it was too bad. Truthfully, I can’t say why Hart quit when he did, not from seeing the movie. Maybe they said. But it came off as one more thing after other things.

Matt Bai, the smart-mouth liberal journalist, contributed to the screenplay and wrote the book it was based on, All the Truth Is Out: The Week Politics Went Tabloid. Possibly he’s the author of the movie’s good bit, a doorstep exchange where the Simmons character and a pal puzzle briefly over the changing media climate re candidates’ personal lives. I hope he didn’t sign off on the movie’s version of Hart. The movie pretends he was charismatic; no, he was presentable. Nor was he the “overwhelming” front runner, as the film asserts. He was the guy who came in second in 1984, and he was looking good for 1988, but that’s it. Plenty of candidates look good ahead of a race and finish nowhere.

Finally, we hear nothing about his ideas. Hart was one of the Democratic Party’s Reagan-era wave of youngish technocrats, people who believed in getting results through clever adjustments to policy and not through the creation of vast new programs or the distribution of good things to deserving groups (aside from young entrepreneurs who competed with Japan by dodging unions and reading Megatrends). After he hit the big time, Hart was at pains to trot out policy speeches and show he wasn’t just a nice-looking man with some fresh patter. But in Front Runner that’s all he is, and the movie acts like his loss would be a blow. Hollywood wants to be serious without being specific, and what we’re left with is a lot of good background footage