The Musk of the Red Death

The Elon’s projects are strange. 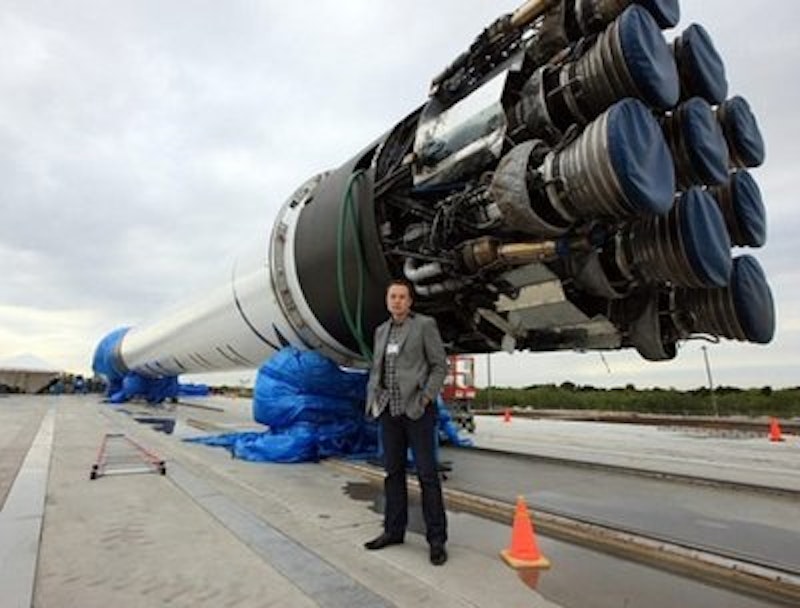 One big recurring theme in Musk’s projects is that they could completely transform the world, but that hype tends to come slickly packaged with warnings about doom that could befall us as a species if we don’t pursue the projects. Another big recurring theme is that immense money-saving efficiencies could be achieved if his projects work—but that tantalizing prospect tends to come bundled with an appeal for government subsidies. You don’t have to be a libertarian to be suspicious of rich people wanting handouts.

Consider the mixed blessings of some of his most well-known existing or proposed projects:

He wants a Hyperloop between New York City and Washington, DC. There’s no denying a projectile-fast supertrain that gets you from NYC to DC or back in a mere 29 minutes (which just happens to be less than half an hour, you’ll notice) sounds cool.

Then again, some political analysts are pleased that the U.S., unlike England, has separate political and financial capital cities, which may have contributed to our success by making it ever so slightly less likely that people will assume wealth-production and politicking naturally go hand in hand. They shouldn’t be bound together. Do we New Yorkers really want DC people here all the time meddling in our affairs and urging us to hold boring committee meetings? Do the Washingtonians really want us dropping in on the Beltway, constantly asking, “What the hell’s taking so long” and what the Washingtonians did with yesterday’s billion dollars?

I can think of at least one prominent politician in DC who still lives part-time in New York City who might love the idea, though—and interestingly, Musk says vaguely that some unnamed part of the government has given him tentative approval for Hyperloop subsidies. I don’t know if we really need an expensive Hyperloop when you can already travel between these two cities by conventional train in a few hours or by plane in about one, but I’m sure it would be easy to make this project sound “great” in a high-profile committee meeting about subsidies.

My apologies to anyone who’s banking on this scheme to really put Baltimore on the map. I admit that in the long term, all these places will probably blend into one giant “BosWash Corridor” mega-city anyway. In DC Comics, the city of Metropolis spans the whole Northeastern seaboard by the 30th century, and that’s probably one of the most accurate predictions about the future comics have ever made (aside from everything in the 1984 cyberpunk comic Thriller coming true, including the Muslim hackers and the viral beheading videos).

Musk created SpaceX, making space just a bit less government-run. As a libertarian, I’m obligated to love SpaceX, but it, too, is partly a creature of government subsidies, working hand in hand with NASA—though admittedly it’s tough to avoid government if you’re operating in or near outer space at this early juncture in history. If you don’t get a government contract to resupply the International Space Station, there aren’t that many other profitable places to go up there just yet. I hope SpaceX will ultimately function to make private spacefaring more likely rather than just teaching space companies to do everything in partnership with the feds.

He wants to go to Mars. I’m all for Martian colonies, though if we create them in the very near future, it’s not hard to imagine everyone involved turning around and saying, “Well, of course we want the red planet to be profitable and self-sustaining in the long run, but we’ll need positively gigantic government subsidies to get through that tricky first thousand years or so of terraforming. I mean, you wouldn’t want the whole thing to run aground for lack of a few trillion in public funds, would you?” And so the Martian Soviet will be born.

There has been a totalitarian component built into American space exploration since the beginning, since we used ex-Nazis such as Werhner von Braun to create our rocket program. Strangely, von Braun took some time off from rocketry in the late-1940s to write a novel about a hypothetical first trip to Mars, and when the fictional astronauts arrive, they find a native subterranean culture awaiting them, run by an elected official known as “the Elon.” (Von Braun’s clique of relocated Nazi scientists in Alabama also went on to run one of the first supercomputers, named PEPE, built by a company founded as an adding-machine business by William S. Burroughs’ grandfather, I kid you not.)

All a coincidence? Long-term Nazi plot? Long-term Martian plot? (Weird triangular light formations in the sky, common in UFO sightings, have lately been reported near SpaceX testing facilities in the Southwest.) Or is it all more evidence for one of Musk’s pet theories…

He thinks we may be living in a matrix. Musk takes very seriously the philosophical argument that since computer simulations of universes will ultimately be easier to make than real universes, and thus more numerous than real universes, the odds are always that the universe in which you find yourself is one of the illusory ones. And if we’re living in a computer simulation, he’d like to find ways to “hack” it, which worked out well for Neo but sounds a tad risky in “real” life, if you ask me. Maybe I’m not ambitious enough.

On the other hand, he fears AI could exterminate humanity. That shows a certain amount of humility, at least. Bill Gates agrees with him, whereas Mark Zuckerberg thinks that’s paranoid crazy talk that could lead to delays in helpful new technology (or perhaps even to someone unplugging Zuckerberg and putting him back in his crate). They both agree AI could in the short term put many people out of work and necessitates some sort of government guarantee of a Universal Basic Income­­—yet another thing about which Musk (like some quasi-libertarians) is wrong, alas. Let government pretend to be the magical provider of nothing, not while there are still voluntary ways of coping.

They also both want self-driving cars. Driving is dangerous, but so is the over-confident mindset that says these things won’t even need emergency manual-override controls, as some cocky designers have suggested. And I imagine that even as he calls for regulation of AI, Musk will still want enough AI to run his self-driving cars, and he will probably tell us the fate of the climate hinges on them being electric-powered like his Tesla cars, which incidentally are also products of green-energy regulations and tax breaks.

The odds are that he and a few other industry leaders will end up shaping the regulations controlling new technologies like these, and it has always been the case that those who mold regulations happen to end up profiting handsomely and acclaimed as the template for good corporate citizenship in their chosen arenas. What better way to encourage regulations to your liking than to warn that without them tens of thousands will die in car accidents and billions will be enslaved by run-amok robots? Best to let the computer geniuses take charge.

You put all the above together and I’m not so sure Musk is a hero like Tony Stark. Actually, you put it all together—Mars, underground transportation tubes, computer-simulated worlds, robot cars­—you get the movie Total Recall, almost exactly. Writer Philip K. Dick wins the prediction game again. And he really believed we’re living in a ridiculous computer-generated sci-fi illusion, you know.