The trick is in what happens around the game. 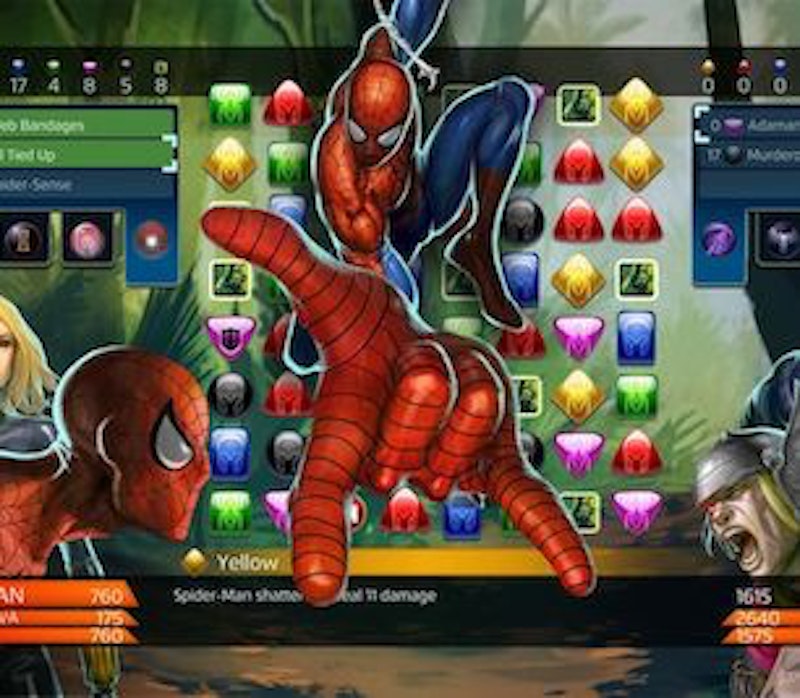 A little more than a year ago I downloaded a free-to-play puzzle game from Steam, fiddled about with it for a few days, and set it aside. A bit more than a month ago I came back to it, and this time I got hooked.

The game’s Marvel Puzzle Quest, and what turned me away at first was the same thing that hooked me in the end: the complexity of the rewards system. The more I played it, the more involved I got in trying to win more, and the more fascinated I became by the techniques the developers used to try to get me to hand over money to play a game that you don’t actually need to pay money to play.

It sounds like an attempt doomed to fail. But the aim in designing a free-to-play game isn’t solely to provide an entertaining game experience. It’s to create a system that encourages players to hand over their cash. Puzzle Quest is a good example of how to do that.

It’s a match-three game, in which you play a strategy game against an AI. You have an eight-by-eight field of colored tiles, and you can move a tile one spot to create a set of three matching tiles in a row. Both players control three characters, and each character has a certain amount of hit points and various super-powers. Matching tiles does damage to the opposing character, and gives you points in the color that was matched. Match enough tiles of the right color, and you can activate your character’s powers: do damage to the other characters, shift tiles around on the board, or freeze the opposing character.

The game itself is straightforward. The trick is in what happens around the game. You select the three characters you take into the game from a roster; you start with a limited selection of characters, and as you win more matches you get “covers” which allow you to add a new character to your roster or increase a character’s powers. You can also increase a character’s experience levels with points called Iso-8, but you have to increase their powers with covers first. And to increase the size of your roster, you need Hero Points.

The upshot of this is that there are three main kinds of experience points in the game, covers, Iso-8, and Hero Points. (Plus Command Points, which are mainly useful later in the game, to increase the powers of high-level characters.) And there are Tokens, which give you new covers—but you don’t know which cover until you open a Token. Sometimes a Token gives you a cover of a character you don’t have, meaning you need to open a new roster spot with Hero Points; if you don’t, you have to either sell the cover for a small amount of Iso or it expires in two weeks.

With so many kinds of rewards, playing the game means that you’re always winning something, always advancing, always on the edge of some new breakthrough that can give all kinds of new tactical options. The endorphin rush of winning a match is balanced with the urge to keep playing, to get just a bit more Iso, another Token.

Bait, and then switch: at a certain point you notice that it’s hard to win Hero Points. And the cost of new roster slots keeps expanding. Meanwhile, if you’re regularly opening Tokens, you soon end up with covers that’ll expire before you’ll be able to buy a new roster slot. And some character covers don’t come around that often—178 playable characters are divided into five tiers, with new characters being added all the time. Thus the temptation: buy new roster slots.

I haven’t gotten into the PvE and PvP modes, progression rewards versus placement awards, and so on; but the gist is that while you’re always winning things, the game’s very clever in making sure the things you win encourage you to pay for other things that it’s difficult to get by winning alone. If you don’t pay, you’ll likely have to watch some of what you won disappear.

Visually, the game encourages you to be thrilled with wins. Dramatic full-screen images and flashing lights emphasize the suspense of opening a token. (Most people, I think, play the game on their phone; I’m almost always on my laptop, so play it there.) The subliminal sensory thrill’s another way to push the right neural button, to trigger another dopamine kick.

And, as well, you’re playing about with characters you know, Marvel characters from comics and movies. They don’t do much—characters have two poses, and occasional cut scenes between matches provide often-awkward dialogue. Some mini-campaigns are fun (there’s a cute set of adventures teaming Spider-Man and Howard the Duck that gave me some honest laughs), others aren’t (one, in which imperialist goon Nick Fury sends a gang of his flunky Avengers into foreign countries in violation of jurisdiction and international sovereignty, makes you doubt whether whoever wrote it understands the basic distinction between heroes and villains). But on the whole the characters are the characters as you know them, with their powers transposed into match-three form.

It keeps you from noticing how you’re being monetized. These characters are now wholly-owned intellectual property of a vast corporation, and the game helps sell them to you. Keep playing on a regular basis, and the game gives you things; a daily reward for logging in, but more than that, every so often the game gives you a digital code to get a free comic. Or (if you’re a U.S. resident) you can join Marvel Insider, an online Marvel fan club, and then when you do well in the game you earn points you can redeem for Marvel stuff. Disney knows how to do cross-platform integration.

Ultimately, though, just as comics have done for decades, Puzzle Quest thrives on the collector’s mentality. Act fast, or a cover’s going to expire! No way to get enough Hero Points? Lucky for you the game’s got a solution, true believer. Just buy them, and you can get on with winning your way through the game.

Or not. My thinking is that the number of characters is large, but finite. If I keep playing, the covers will come around again. If I don’t keep playing, I’m not going to care. Is the fun of the game worth paying for? For many people, sure: the game’s been going since 2013. I feel no need to give Disney more of my money. Still, I can’t deny the damnable cleverness.