Everybody Should Get Off Everybody Else's Back 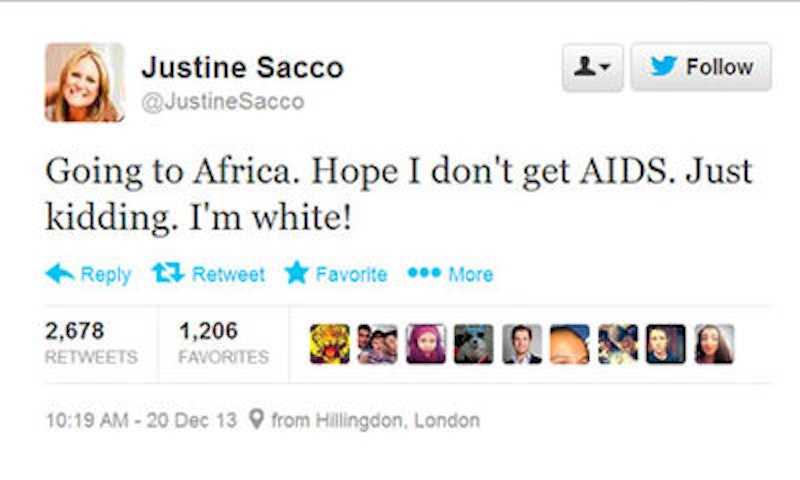 People talk about new rules. Here's one: if a private citizen messes up on social media, let the people in their lives decide what to do about it. The people who knew the name of the sinner before they saw some crap on Facebook. If you didn't know the person before this, do not tweet, do not post. Don't organize ways for the sinner to feel like shit because the world hates him (or her). Don't pop up on their phone and let them know how terrible they are. Drop it. This should be like seeing celebrities in a restaurant: the person who walks up is an asshole. Smart people give some space because that is humane. Even celebrities deserve a bit of humanity. So do people who screw up on social media.

You may remember the case of Justine Sacco. She was getting ready to fly to South Africa, and she tweeted this: “Going to Africa. Hope I don’t get AIDS. Just kidding. I’m white!” By the time she got off her plane, she didn't have a job. Not only that, but people around the world were delighted. Her tweet had spread from person to person, and then it was posted on a big blog, and now much of the planet knew what she had said and how disgusting it was. There was a hashtag: #HasJustineLandedYet. Her employer had fired her by tweet, and she didn't know because she was on a plane. People wanted to see her face when she got off. She did get off, and she heard the news, and they enjoyed it. Justine Sacco was toast.

Over the next few days, a couple of facts bumped into view. They didn't get much notice; the story proper was done. But it turned out Justine Sacco came from a South African family; when she tweeted about scary Africa, she was flying back to where she was born. And her family, though certainly white, were longtime supporters of Nelson Mandela and his party, the African National Congress.

There was another point, given in passing: she said she was making fun of being white. In her tweet. She was saying a dumb thing a white would say.

These facts have re-emerged in Jon Ronson's new article, “How One Stupid Tweet Blew Up Justine Sacco’s Life,” which is excerpted from his upcoming book, So You've Been Publicly Shamed. He's taken a look at a few people who got flattened because they said or did the wrong thing on social media. At least one victim was understood pretty much as intended: at Arlington, where a sign demanded silence and respect, she pretended to scream while giving the finger. No malice toward the troops, of course, but no respect either—she preferred staging her little joke. I wish the decision of what to do about this had been left to the people who knew her, not the millions of people who felt like jumping on a stranger. “She barely left home for the year that followed, racked by PTSD, depression and insomnia. 'I didn’t want to be seen by anyone,' she told me last March at her home in Plymouth, Mass. 'I didn’t want people looking at me.'”

As for Justine Sacco, it's hard to believe she was sneering at blacks. She's in the media, went to fancy schools. She was making fun of privilege. What else is new? Privilege-mocking is the thing these days. It's common among young media types, whereas sneering at blacks has become unusual. Statistically, her tweet has a much better chance of being a bit of snottiness about white entitlement. Plus there's the family, plus the absence of anything but the tweet to indicate any racism on her part.

Or maybe you could just drop this stirring through the details of her life. Let her family and friends and employer decide (on their own, without Twitter bombardment) what to do about her. Let her Mandela-supporting aunt demand what that tweet meant, and let Justine say, “But, but,” followed by something about making fun of whites. Let the Arlington woman reckon with her friends and family—and her bosses too, if they see the picture. The same for the girl who dressed up as a victim of the Boston attack, and the dope who took the selfie at Auschwitz. If you don't know them, roll your eyes and move on. You’ve been stupid too, I guarantee it. You've been ungrateful, callous and dumb. You've made an ass of yourself. You've hurt people's feelings. You've made jokes and watched somebody's face shrivel up, and all the time you thought they would laugh. But you didn't do it on social media, and therefore your life remains unbroken.

Mass shaming is a buzz saw. Maybe people who play with a buzz saw deserve what they get. But I don't think it should be there. What good does it do? We're told that browbeating by social media will make people think the right things and have the right feelings. Good luck. So far all it has done is make life more squeezed and uncomfortable and give people new reasons to hate each other. Everybody should back off.