The Gaming Industry Shouldn't Be a Boys Club

And no I won't just get used to it. 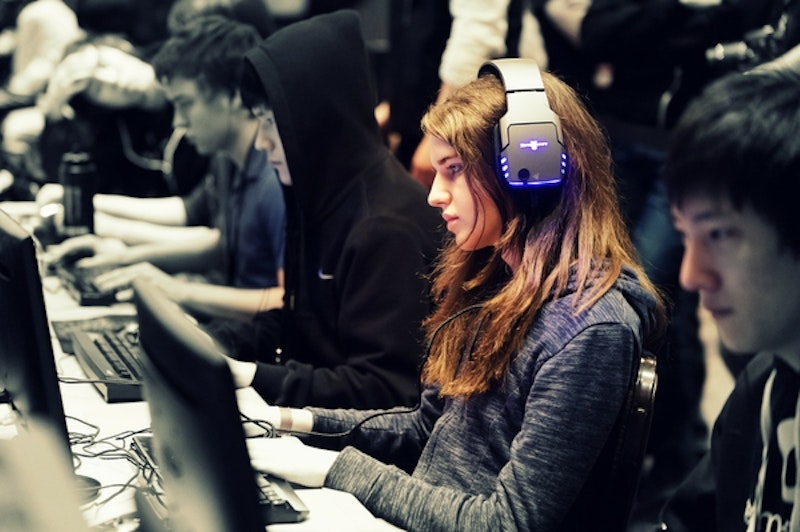 I’m a simulation and digital entertainment major at the University of Baltimore. When I went to orientation a couple of weeks ago, we were grouped by what “school” or “college” we were enrolled under, and then sorted by major. I found that I was the only woman in my group.

I’m also the only female in my game design class, and one of two in my Internet technologies class. I’m sure this will be an ongoing trend for future classes. I was telling a friend how I felt a little intimidated being in a class of all men. Back in Community College, the classes I took were nearly dominated by women. I hadn’t taken into account that most of my courses were related to arts and humanities. The friend shrugged her shoulders and told me that I’d eventually get used to it.

But I won’t get used to it. Not yet, at least. For example, at my first day in game design I walked into the room and looked around—the walls were plastered with decals of space invaders and old school Atari graphics. No one was inside yet, so I got first dibs on seats and decided to plop down near the front.

Eventually the room filled in. My table was full of men, all different shapes and styles. Most wore glasses or game related t-shirts. I looked down at my satchel, which was adorned with an “N7” patch. That was the only indicative sign that I was actually one of them, and not just a girl who sat in the wrong room.

I listened as some of them talked with each other about a few topics that flew completely over my head. Game engines? I knew a few. Code? Eh, not really. Wait, what sort of graphics card? Now I’m lost. I felt out of place. Was I not nerdy enough to sit among those who I considered my peers? I’d waited so long to be able to learn this trade and share my interests but this was not what I’d envisioned at all.

It’s no secret that women play video games, even though there’s still a pre-conceived notion that we don’t. If that’s the case, then why aren’t there more girls who want to learn how to create games? My belief is that society and the current gaming industry are partially to blame. Society pushes little girls into lines of work like teaching or nursing while boys are encouraged to become engineers or computer technicians. The game industries are still largely made up of men, and pay AAA companies to publish games with men as protagonists.

That’s not to say there aren’t any games that feature women—I’ve played a few that do a wonderful job. My only gripe is that I want more girls to recognize what a great medium video games can be. They can be used to educate and challenge our way of thinking. I can’t express how much I admire them as works of art and as platforms of thought. That’s why I want to work in the industry. I want to show women that it’s not just a boys club. I want to sit in this game design class and feel confident and welcome, not awkward and out of place.