I don't care what that guy said in New York magazine. 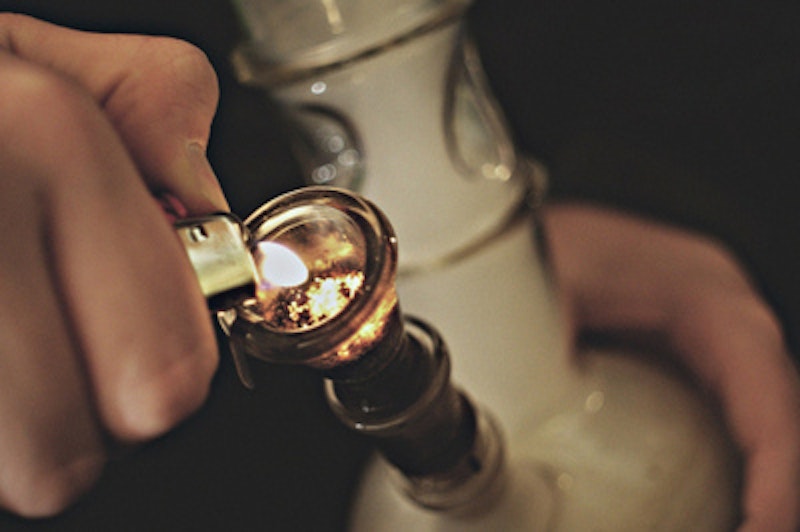 You can smoke joints instead of bongs. You can get fleeced like Eunice Kennedy's youngest grandkid his first week at Country Day. Even so—$1000 a week? No, there are physical limits. But Cedric Bixler-Zavala says he did it. He's a rock star who discussed his thousand-a-week habit, or former habit, with New York. The interview focuses on the least interesting part, of course. “Here, Bixler-Zavala explains why he gave up pot,” New York says, followed by five paragraphs of Mr. Bixler-Zavala (or B-Z Bee, as he's known on the street) trying to wrap a few small and hairless thoughts in a shaggy mantle of words. “I've come to realize that, at the end of the day, it's only you yourself that creativity comes from,” he tells us, which is a good call.

But why he quit doesn't need explaining. He was baked all the time; people get tired of that and they stop. What I want to know is how he spent all that money. During some periods of my life, I have been stoned for months on end. During these periods my pot outlays came to $15 a week. It was good stuff. The obliterating pot wiped me out; the mellow translucent-high pot dropped me inside a mellow translucent high. Everything worked just fine, and it took three months to get through a small pile worth $180. During these periods I guess I was straight for a random 20 minutes here or there.

I don't have much in the way of social resources. B-Z, by contrast, has managed to join three different bands. New York says the Bee was “front man for the Mars Volta and At the Drive-In” and has since moved on to “a new band called Zavalaz.” Behind those goofy names lies a tangle of people, apparently none of whom has a decent number for doorstep delivery. Or, if one of them has such a number, that person has kept it away from the Bee. Maybe people don't like to talk about pot when he's around. I think he says dull things on that particular subject.

“In this day and age, the stuff people are smoking is not necessarily even naturally grown from the ground, anyway,” B-Z tells New York. “It's basically been altered to fuck you up and fuck you up royally.” The first part of that remark is hippie superstition (“not from the ground” equals bad). The second part keeps getting trotted out as news. Not super-correct either: as indicated above, some pot messes you up, some doesn't. Effects vary from strain to strain, and your dealer can tell you which strain does what. That's really the effect of today's newfangled growth methods. This not-from-the-ground business where genetics get fiddled with—it doesn't make all pot into a mutant bone-crusher. Some pot, sure. But the big thing is you get more choice.

B-Z has more to say about pot. “I was using it to form this stoned bubble that helped me justify not wanting to interact with people,” he says. Listening to his pothead songs, he cringes. “I was not really communicating all that much other than just being long-winded and trying to be difficult for the sake of being difficult,” he says. Both statements are no doubt true: these are pothead problems. But the Bee doesn't seem to notice that he's still long-winded. Or that he's giving us revelations that are really things everybody knows.

What does that behavior sound like? The Bee says he used to noodle over whorls of expression. But now that he's pot free, the Bee's music “has gotten even more complex and layered,” New York says, or warns. Maybe he's stuck. He's one of those people who stays a pothead whether or not he's stoned. In that sense, he can be a pothead for zero dollars a week. But for a thousand? Nobody can and it's all bullshit. He was just high and he got mixed up.