UPS, You Did a Bad Thing

I was waiting for that lamp. 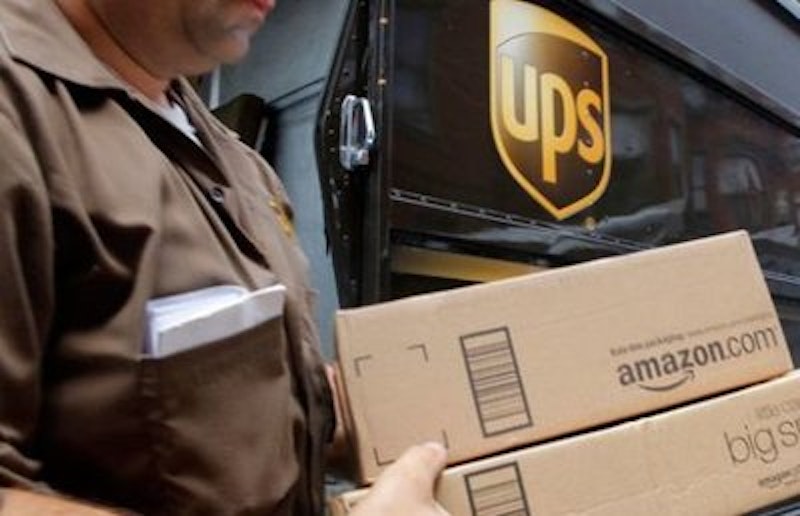 Okay, I spent a morning on the phone figuring out what happened. And it’s this: the UPS driver showed up, found I wasn't there (acupuncture) and then left the package. No signature required for delivery, so they dumped the thing and took off. Apparently that's UPS policy. The driver can leave the package anywhere that appears to be safe and secluded enough. Fine for the suburbs. I live in an apartment building, in a major city, but what the hell.

The lady on the phone said the driver's notes said the package was left at “balcony.” Just the one word. I guess the driver meant under the first floor apartments' balcony, not on the balcony. Getting the package onto the balcony proper would have meant lofting it over the balcony's railing, which is firm and rather high. Whereas under the balcony you find the door to our building's front alcove or parlor—the room where the mailboxes and the intercom buttons are, along with the door (locked) that opens into the building proper. So I guess the driver buzzed me, found I wasn't home, and then left the package—a floor lamp—in this parlor, or just outside the door that leads into the parlor.

Either way you have the overhang of the first floor balcony. And you go down six steps to get to the parlor and its door. The combination is like a man-made crevice. The overhang and the little staircase's drop make it seem like the door is buried. Which it isn't. People standing on the sidewalk can see into the parlor. If they take a step forward, the people can see the area outside the parlor door. Somebody might have paused and looked at the little garden we have out front—the concierge takes good care of it, and it's a nice sight. That somebody would have seen my lamp in its box from Amazon.

Sophie (the lady who looks after the garden) and M. Gobin (the landlord) tell me they saw and heard nothing about a package or attempted delivery on the day in question. The tenant in Number 1, with his slot of a window adjacent to the parlor's door, said he didn't see or hear anything either. He was friendly and wanted to talk about the weather. Did he take the lamp? Jeez, I don't know. UPS driver, why did you leave it there?

They didn't used to do that. I recall a series of missed-delivery tags when I lived at my old address. A couple of times I got mad because the driver didn't buzz me. But on taking off, the driver left a tag. I remember UPS tags; they had a heavy design: a lot of brown and tan, and the logo. The packages I waited for were smaller than the one that just got thrown away. That was a lamp for $125, and the packages that rated tags were nothing but a book here or there, or a set of tapes. But now, even if your order cracks a hundred, UPS may dump and run. At an apartment building in a major city.

Such is the crappy pace set by today's capitalism. Businesses are running so frantic that niceties of operation have slipped away. That's how I read it. I'll note that the UPS website gives the wrong number to call if you want to talk about a Canadian delivery. I had to spend 10 minutes waiting for and conducting one phone call before being routed onto another. (Everybody was nice.)

The UPS lady I got at last told me I had to talk to Amazon. It was a UPS tracking number, but even so. I tried Amazon's site, and only senders could ask about delivery problems. I was just a receiver.

Eventually the sender herself spoke to Amazon. No problem, new lamp promised for Friday, no charge. Well, I don't know. We'll see. The thing is $125. I guess Amazon has so many lamps on hand that it can strew them as necessary. Let a certain number slip away as the driver pelts from address to address. Cough up replacements as needed; the point is to keep up the speed.

If my guess is true, then I resent these rules. It's a feeling I get from deliveries and help lines, website orders, things like that. I can't be competent unless I deal with these things and get results, because otherwise the lamp doesn't get to my apartment. But often the things follow no logic and I have to tag along anyway. My attempt at being competent leaves me feeling like a kid who doesn't get the game—whatever's doing in this playground, I don't know the rules. That lamp costs $125. I'm sure you don't just hand it out.