Why I choose Pat’s over Geno’s. 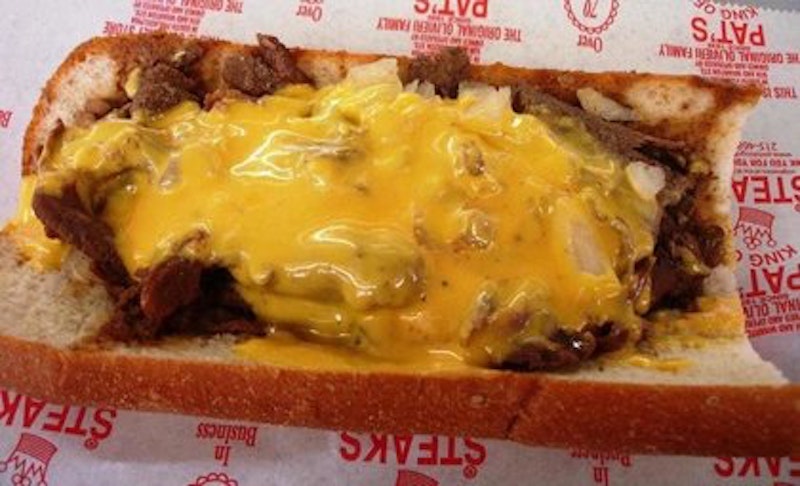 During the longer, toll-free commute from Brooklyn to Baltimore, I often can’t resist a pit stop in my favorite city, Philadelphia. The art, old buildings, narrow streets, markets and people appeal to me. More importantly, the dirty, sexy city is enshrined birthplace of the cheesesteak.

Forget any no-name pretenders, whom hip locals may recommend; I’ve been to the city too many times to fall for their crap. What should be common knowledge is that only two worthy competitors exist in the trade, the original Pat’s King of Steaks and that right-wing, Tea Party patriot and defender of the English language, Geno’s Steaks. These two are 24-hour sites, their angled establishments continually at war, a very courteous war, in the hourglass of E. Passyunk Ave. and S. 9th St. The proximity renders these contenders almost a tag team rather than enemies; no matter the time, each draws an inexhaustible line of tourists, tipsy bar crowds heavy on the frat apparel, pot-bellied laborers, servicemen, fanatics, and bums who spend all day scraping coins together and begging for a sandwich.

Today I choose Pat’s. “Whiz wit.” They can issue you a sandwich in about two seconds. But the line allows for observations. I hear the chopping of sizzling rib eye; I see the globs of Cheez Whiz ooze down from the ladle and flood the steak-and-onion-strewn clefts in the distinct Amoroso rolls. I’m one of the weird folks at the ledge of ketchup dispensers pumping that blood color all over a culinary minimalism that has been perfected into purity, but I don’t care. I make my way to the nearest unoccupied picnic table and indulge.

Once I remember driving by the trap of these shops in a car full of vegans who wished death on all the patrons, because meat is murder; little did they know that at night when they were snoring I got up from the couch on which I was crashing and jogged the several blocks down scary dark streets and through the ghost-like market, with its empty chicken cages, to Geno’s where I wolfed down a cheesesteak. Another time before that, as a kid, I did a taste test and believed I liked Geno’s best, finding Pat’s meat a bit more gristly and tough that day. But then I was oblivious to privilege and politics; such considerations were not the first on the mind of a hungry teen pulled in two directions by the smells of meat and onions.

But in recent trips to the city, I’ve had exactly those two considerations to address. Product taste aside, for me there is something particularly unsavory about the point of purchase at Geno’s. The late founding owner Joey Vento was loud and proud when it came to his right-wing politics and disdain for what he saw as a lack of assimilation among immigrants in the city; he delivered a “no English, no cheesesteak” edict for his shop, though the establishment assures the public that, push come to shove, no discrimination will occur, and you’ll be served no matter what. Well, then why subject your patrons to the unnecessary bashing rhetoric that plays no part in increasing sales?

Ugly politics in business are even uglier; prejudice butchers a free and just market. Before he croaked in 2011, Vento fought adamantly against the takedown of his precious stickers, guilting his successor into keeping his staunch xenophobia and English language supremacy alive. Emblazoned on Geno’s vending windows appear several unwelcoming, tacky and shameful stickers. One reads, “I am mad as hell, I want my country back,” and has Joey’s head superimposed above a blank white map of the U.S. drawn with a black contour. Another depicts a furious, dull-eyed bald eagle, before a stars and stripes backdrop, screaming, “This is America! When ordering speak English!” This crap makes me want to roll up and use my limited French just to screw with that mentality, but I don’t want to pass any more dollars into the hands of this hate speech hype machine.

Geno’s attack ads are preemptive and entirely overkill, especially for a sandwich shop whose product line is so simple. Even if a foreign language customer or a person with a disability were to come up to the window and point or search for the nearest words in another language, the experienced staff should be able to resolve the order quickly enough without burdening the line. Besides, think of all the American travellers who go to foreign countries and order their meals in English. Imagine if those Americans were continually denigrated for not knowing the particular language of the land. Let’s face it: Geno’s bigotry entirely ignores that the shop is operating in a tourist trap that draws people from all over the world. How dumb is that?

So I started going exclusively to Pat’s, the originator of the cheesesteak. And it’s certainly a damn good sandwich; after three consecutive tries, I can attest that its meat is as delectable if not more so than Geno’s, and it is, in an important sense, guilt-free. Pat’s cheesesteak is what I call a clean-burning fuel, meaning it does not upset my stomach or give me heartburn like the knockoff garbage they shovel into stale rolls all across the country in little pizza shops and the like. It is worth the 11 or so dollars, if you don’t mind occasionally getting stuck in bad football traffic while trying to exit Philadelphia after the stop.

Pat’s, unlike Geno’s, makes ordering welcoming, fun and touristy. In its company colors of white and red, its large rectangular placard spells out “HOW TO ORDER A STEAK” in the wise words of I. M. Hungry. Customers are invited to try out the local speak of “wit” or “wit-out.” There is a step-by-step process that signals both a well-oiled machine and a fun game for “rookies” and veterans alike to play. I imagine that fair-minded people can appreciate the absence of the too serious rhetoric and language orthodoxy that plague and cheapen the experience over at Geno’s. Pat’s placard maintains a sense of humor without prejudice: "If you make a mistake, don't panic, just go to the back of the line and start over." Pat’s doesn’t need flags and stickers all over the property, because they are not in the game of politics; they are true to the meat of running what I deem to be America’s first and finest cheesesteak factory. Who wants xenophobia drizzled all over their steak?