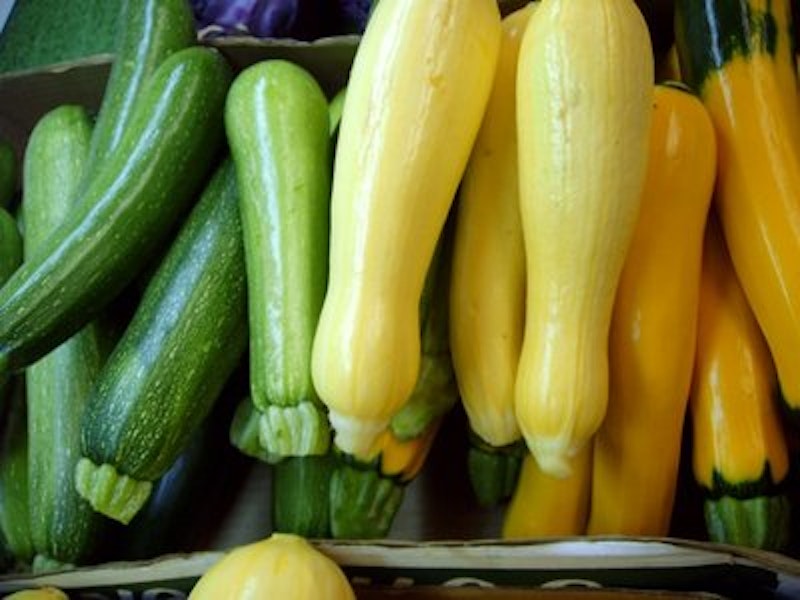 We backyard gardeners think of ourselves as cultivators, stewards of a slice of land, contributing members of society. We bask in our own productivity and generosity. But we know we have a problem. Actually, we are the problem.

We know better. At some level we realize that unwanted produce is a burden, weighted with the implicit demand to put this healthful vegetable to good use, yet we go ahead anyway. We give away our surpluses. Summer squash are the worst of the troublemakers. First they take over your garden. Then they take over your life. Your friends and family are moving forward, focusing on their own concerns, none of which include summer squash. They are oblivious to the approaching menace caused by your misguided impulse buy at the gardening supply store, compounded by the heedless decision in the first warmth of early spring to plant a row or two to see what happens. The summer squash rise up and construct a canopy of broad leaves to snuff out the competition (kale and chard in my case). Only cucumbers, which have a similar modus operandi as well as advanced climbing capabilities, can survive in the vicinity of the squash. If man-spreading is a guy taking up two or three seats, squash-spreading is taking up the entire subway car.

The result is a riotous fray where once stood neat rows of cultivation. You ignore the area, keep your distance from it. Until that day when something catches your eye. You look again to confirm. A fully developed squash. You bend down. More than fully developed, it’s weapons-grade. A yellow, elongated watermelon. You twist it off the vine, experience the joy of first harvest. You peer under a few more leaves and discover this was no fluke. You count half a dozen oversized squash, another eight that look like the ones sold in stores, and loads of minis and flowers showing a production line surging at WWII capacity. Plus at least 10 cucumbers dangling off the fence and from the branches of innocent nearby shrubs. You have a problem.

Recent symptoms of my squash and cucumber predicament:

I received a spontaneous invitation from a couple to come over for dinner. Courtesy suggested I bring along a cabernet or a chardonnay. Not this time, not when I had a squash the size of a champagne bottle and a brace of cukes to go with it. They were polite about it, but I don’t expect to be invited back during the growing season.

As a teenager in Wisconsin, rhubarb and zucchini were the primary problem produce. Neighbors would watch and wait until no one was home, then they’d leave piles of zucchini and bunches of rhubarb in unmarked brown paper bags on your porch. You’d arrive back home and there they were, still warm from the sun, no return address. Nothing you could do about it except endure another round of zucchini bread and rhubarb pie. And vow revenge.

A tip for gardeners: if you’re going to stoop to stealth distribution for your excess squash and cucumbers, always wear work gloves while harvesting. You don’t want to leave any fingerprints.