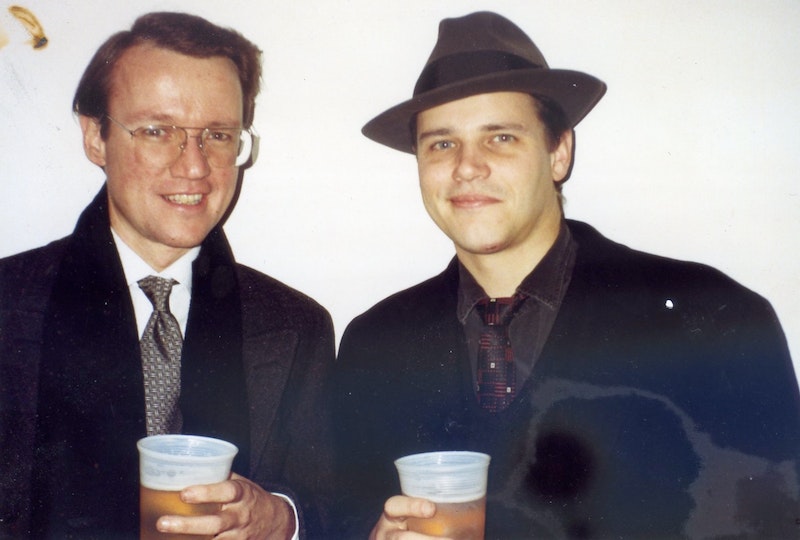 The recent news that Soho’s branch of Dean & DeLuca has closed took me by surprise, although perhaps that was naïve considering that retail outlets and restaurants—even those not overly threatened by online buying—are dropping one by one in New York City. Onerous rent hikes, the need for another Bank of America branch and monstrous condo constructions are filling the void. I live in Baltimore now, but was in Manhattan when the grand Prince and Broadway food emporium opened in the fall of 1988, and was a frequent customer. In fact, most of my friends and colleagues at New York Press—our Puck Building office was just a block or so away—also stopped in a couple of times a week, even if just for an overpriced pasty and decent cup of coffee (this was before Starbucks was allowed inside NYC borders).

D&D was always packed—the days leading up to the holidays were murder, but when you needed Smithfield ham, an obscure French cheese to impress guests or Andouille sausage there wasn’t much choice—and though some of the staff was officious, shooing away malingerers, there wasn’t the ersatz “tough guy” routine that defined Katz’s Deli, say, or the very early days (mid-1980s) of Odeon, to say nothing of the models who staffed boutique hotels. It was, to slip into long-ago lingo, symbolic of “the go-go 90s.” There was a hitch: because of the store’s popularity, sometimes you had to navigate the aisles very carefully, lest you run into someone you were avoiding. (To a lesser extent, the same could be said for the Tower Records at Broadway and 4th, or the Union Square outside market.)

Once, in 1991, a very amiable fellow, no name required, who helped facilitate the sale of Baltimore’s City Paper for me on behalf of a then-bustling British firm, had met with me at the office to pitch (translated: investment capital) a start-up idea. He’d left London after his company went bust in the media recession of ’91, and was down on his luck. I listened intently to his proposal, as manners dictated for a man who’d helped me out a few years earlier (and not incidentally, was of enormous help when I was in London for six weeks in the fall of ’87, meeting people who might help me start a free weekly there, ultimately a stillborn venture) but his project was hare-brained, which I let him know using a far more polite euphemism. I suspected that he’d met with 50 other rejections from far more high-powered individuals than me, but still felt bad.

Anyway, a month or two later, I stopped into Dean & DeLuca after work, and there he was, shopping with his boyfriend, and I must say, looking much worse for wear, with what remained of his hair all askew, and wearing clothes that were more suited for Portobello Road than the smart Savile Row suits he once sported. I really didn’t want to engage in conversation, but did, and though it wasn’t uncomfortable, I did notice a lesion on his face—this was peak AIDS time in NYC—and never saw him again. I hope, if he was infected, that he was one of lucky early men slammed with the virus who found the cocktail that was just starting to commute death sentences.

On the other hand, there were other people—publicity agents, awful writers who hounded me several times a week, my landlord, bitter ex-employees or one of the many people I was feuding with at the time, usually from other media outlets, that I did an exit, stage right, to safer environs, like Puffy’s bar. Sometimes, my friend Michael Gentile (pictured above with me) would say, “Hey boss, your two o’clock, time to switch gears!”

This awkwardness isn’t uncommon for younger people who go out frequently and meet a lot of people in their line of work. In the 1980s, in Baltimore, a hub where you had to have your wits about you was the Giant supermarket at the old Rotunda on W. 40th St. If you lived in the city, there weren’t many decent places to shop—unless you went the fancy WASP route at Graul’s in Ruxton—and, especially on Sunday nights, it could be a rat trap that required a very careful duck-and-weave. Despite its undeniable cosmopolitan status, NYC is every bit as provincial as, say Baltimore or Boston, in that residents have a regular routine when completing errands, and often don’t travel more than 20 blocks from their apartments. It was a point of pride for some, especially for pre-hipsters, to say, “I never travel above 14th St.,” and, really, that’s a pretty harmless bit of braggadocio.

This peeve of mine has nothing to do with the ongoing MLB playoffs—although I can’t stand Joe Buck’s cursory third-inning interviews with managers—but before the season slips away it must be recorded. Watch a ballgame on TV—or in person—and doesn’t it strike you as odd that when a player retrieves a foul ball he always tosses it into the first three rows? Nice if a kid gets the souvenir, but really, why not chuck the ball 150 feet to some spectator in “cheap seats,” as John Lennon once said, instead of the box-seat patrons who’re rattling their jewelry or very expensive cell phones? On a more positive note, it’s always great when an adult makes a spectacular grab of a foul ball and then immediately hands it over to a kid a few seats away.

It was on the TBS crawl for just a moment on Monday night, during a broadcast of Steven Strasburg leading the Nats over the suddenly hapless Cardinals, but the words, “Juan Soto: National Treasure” really, really bugged me. Not a knock on Soto, just the cliché’ “national treasure.” This country has so many of these “treasures”—the term is bandied about every day—that if the government cashed in on them, no new taxes would be necessary for a coast-to-coast mass transit infrastructure upgrade.