Notes From the Culinary Underbelly

Many aspiring young cooks have no idea what kitchen work is like. 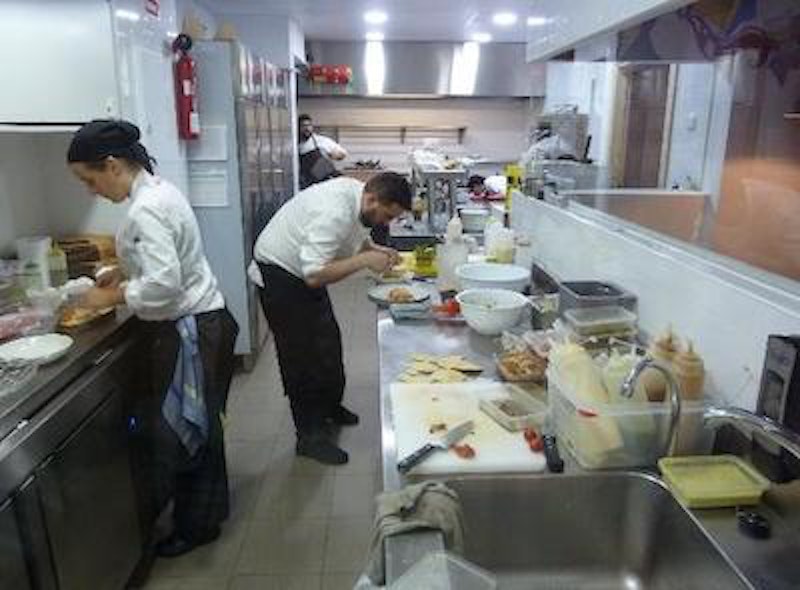 In a previous era, chefs were blue-collar workers who toiled away anonymously in the back of the house. But now that they've transcended the once-rigid class structure and are front and center in the culture as successful entrepreneurs, creative geniuses, and personalities, some young people are finding themselves drawn to kitchen careers. But it's hot back there, which is just one drawback their favorite celebrity chef may not have told them about.

The celebrity chef's a phenomenon I trace back to the once-brilliant—and now chef manqué—Jeremiah Tower in the 1980s in California's Bay Area, who’s since been written out of American culinary history. The late Anthony Bourdain also inspired thousands of kitchen careers with his hit book, Kitchen Confidential, published in 2000, which went on to become a bible for young men attracted to the picaresque stories the former chef told of working in the "culinary underbelly." Kitchen Confidential is to a young line cook what The Art of the Deal once was to a certain type of MBA student in the 90s.

But if the book had a cautionary tale embedded within it (Bourdain wrote of the psychopaths and addicts in kitchens), that was mostly lost on those who saw only the hedonism and debauched glamor and wanted a piece of that action as they pursued their culinary passions. A two-year stint I once did 15 years ago at celebrity chef Wolfgang Puck's Spago, located within the Maui Four Seasons, gave me some insights into what it's really like back in the galley, something that the "externs"—recent graduates—we'd regularly bring in from the California Culinary Academy and Le Cordon Bleu didn't fully grasp until they'd gone deeply into debt and had to work on our line.

There was the time that Ray, a Cordon Bleu hotshot, got assigned to work the line—on the very challenging fish station—for the first time. That Cordon Bleu doesn't pressure-test its students soon became obvious. Working right across from Ray as a new line cook on the grill station, I witnessed a newly-minted culinary school grad crash and burn in a spectacular fashion. Our normally calm and jovial head chef morphed into Gunnery Sergeant Hartman in Full Metal Jacket as he spent the entire evening screaming at Ray, right up in his face. Each mistake Ray made compounded itself as new orders continued to flow in and he got further and further in the weeds.

I’d had no culinary training, but one thing I'd figured out by that eventful evening is that, when you get on the line for dinner service, you’d better know every detail of the portion of the menu you're cooking. Our menu changed daily, which required study. When an order for two opakapaka, one fish curry, and three Thai-style deep-fried ono comes in, you will not have time to consult your notes about what you need to put on the plate. “Classically-trained” Ray, like an actor making his debut performance without having studied his lines, learned this crucial lesson in a hard way. "My mind doesn't work like that,” was the only weak excuse he offered the hopping-mad chef after dinner service was over. That had to be a crushing epiphany after spending thousands of dollars preparing yourself for a job requiring you to work like that.

I'd arrived on the line via the "grunt" way, like a “walk on” on the college football team competing against scholarship athletes. Having no fancy culinary credentials, I visited Spago several times until the chef finally came out and offered me a two-hour “audition” working on the line (called "trailing"), which I failed. But then he offered me a dishwasher position that I gladly took because, at the time, I was working as a line cook for an asshole Moroccan chef at a restaurant down the road and was desperate to escape his madness.

I passed the dishwashing test after a couple of months, and the chef promoted me to the line, meaning I had the exact same job as recent culinary graduates like Ray and several others would get. This didn't please “JJ,” a recent California Culinary Academy grad with an undeserved air of self-importance who was soon to find out that she wasn't cut out to do the job she'd trained for either.

JJ, who looked down on me, the former dishwasher, was constantly cutting herself. All that money she’d spent without acquiring basic knife skills, like a carpenter’s apprentice who can't even use a hammer. When she took a part-time job at a local cheese shop, JJ cut herself so badly that she had her entire hand taped up, with the thumb sticking out at a 90° angle. Joss, another dishwasher who'd worked his way up to the line, loved calling out the name of a movie and giving her the "thumbs up" sign, which she hated.

Joss, a former crack addict (and high school Homecoming King), pulled no punches. One day when JJ'd been driven from the line and was washing pots and pans—she was like F. Scott Fitzgerald in the Hollywood phase of his career at this point—he laughed right in her face about going $40,000 in debt to do his old, crappy job while he did the job she'd trained for. It was a brutal cut, but that's what arrogance can bring you.

The Spago kitchen was a disciplined, hard-working one that could put out a large quantity of high-quality food every evening under extreme pressure, and while there may be an element of glamor in it that working at the Golden Corral lacks, the work is sweaty manual labor. I worked surrounded by four 500° ovens, and was making peanuts on a very expensive island in the Pacific. At the end of a shift, which felt like an athletic competition, I'd often have the cold sweats.

I decided to leave the business, which was easy because I had little invested in it. As for those who'd paid so much to get into jobs they were unequipped for, or could have washed dishes for a couple of months to get, I wondered if they’d gotten lured into a career they didn't know enough about. Maybe admiring celebrity chefs or reading Bourdain had filled their heads with unrealistic expectations and they’d failed to do their due diligence. I wondered what they'd think about Joss, the blue-collar scrapper who went on to become a sous chef for Wolfgang Puck while they continued to struggle.