Lost Donuts of the West

Local, homemade donut shops are a big business in the rural West. 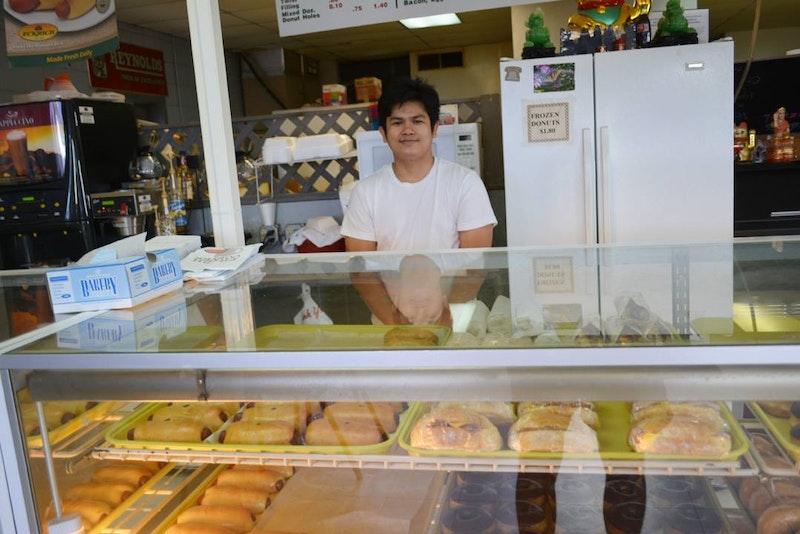 My hobby is driving the rural back roads of America, where towns are far apart, falling apart, forgotten, ignored… and mostly abandoned.

On one cross-country trip I discovered that local, homemade donut shops are a big business in the rural West. If a deteriorating town along the back roads has any business… it’s a donut shop. And not in a shiny new building—like a Krispy Kreme or Dunkin’ Donut outlet—but usually in abandoned laundromats, ex-burger joints, or little forsaken gas stations.

It’s bizarre. I’d been driving past them for a week, wondering what really went on inside. How could they survive, where even a drug or car parts store couldn’t? After my night camping in tiny, and mostly vacant Goodlett, Texas, I finally stopped at my first Western-style god-forsaken donut shop—for a coffee, I thought. It was dark, and empty of people, except the clerk. He was a Cambodian. He explained to me, in a thick Asian accent, that his aunt in New Orleans owned many donut shops in Texas. He managed this one.

His one employee arrived to make the donuts at two a.m., and then left by nine. The manager himself arrived at six to run the counter. He could make donuts, but didn’t like it, and certainly didn’t like coming in at two. Most Western donut shops close at two, his favorite thing about the job. I wondered how he felt, in this lost space, so different from his home. He said there were maybe four Cambodians in the town, and that he missed home. He said I should visit Cambodia because it was so lush, green and beautiful, unlike the dry and barren Texas panhandle.

A car beeped at the drive-up window. It must’ve been a regular customer, because the manager handed her a ready-made box, the size of a giant pizza. It had two dozen donuts of different colors, icings, and shapes. She was a very large person, and I wondered for a moment if she would eat them all herself. Or would she take them to a local government office, where she worked, and leave them in the break room for all her desk-jockey friends.

I asked him if he ate donuts. “No, they’re very unhealthy,” he said.  “Asians only eat fresh vegetables; healthy food. Americans eat all the wrong things, they only eat food from cans; no fresh vegetables. So they’re fat, and sick.”

“Well, I’d say you’re contributing to that aren’t you?” I asked.

“I don’t care. They eat what they want, but they should know better.”

I paid for the coffee, and he handed me a neatly folded paper bag.

“Something for your trip,” he said, with a smile.

It was six glazed donut holes. I thanked him and wished him all the best. Out in my van, I tasted one. Greasy, sickly-sweet, gummy.  I pulled into the Walmart at the edge of town—the one responsible for closing down all the old Main Street shops. I needed a bottle of super-strength bug remover for my windshield—a necessity after all my Deep South spring driving. I parked next to a ratty flatbed truck with a dog chained to the bed. It looked at me with the saddest eyes, and I thought for a second about giving it the greasy little bag of donut holes. But the owner might see me, and I didn’t want a Texas roughneck shooting me in the parking lot for poisoning his dog. So, I walked to the store: and despite the kindness of the Cambodian donut man, slipped the bag of donut holes into the trash bin by the door.