A defense of a nobler grape. 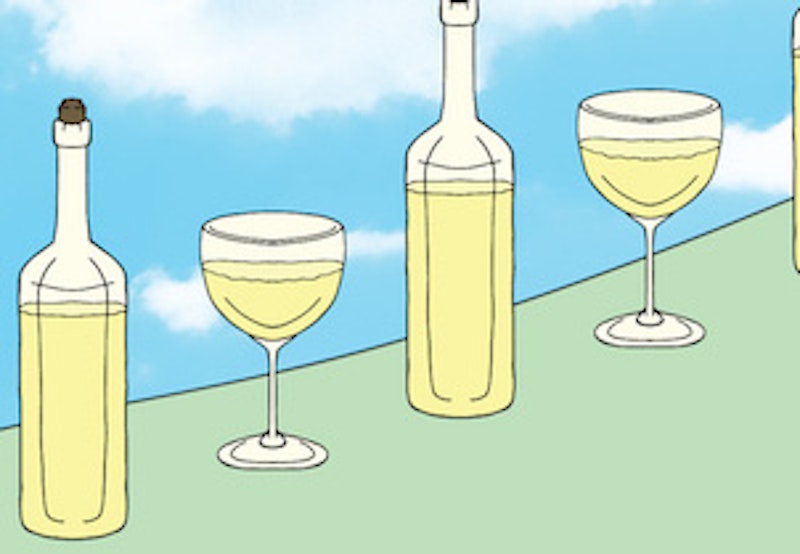 A wine list can be daunting. Most people are indifferent, at best—“I’ll have your house cabernet,” they say, without glancing at the list at all. At worst, they’re terrified. On a first date, perhaps, the more dominant of the two feels inclined to take charge of ordering something to drink.

I never enjoy watching their faces grimace, eyes darting all over, trying to make sense of it. No one should be belittled by something as harmless, yet confusing, as a wine list. This is where I step in.

When I ask if there’s something specific they’re looking for, one of the more common responses is “Riesling.” They won’t find it on this particular list, however, because where I work in Phoenix Arizona offers almost exclusively Italian wine, and for the most part, only the tried and true of the region—Chianti, Nebbiolo, Pinot Grigio, and a select few others of the thousands of grapes that span the country. Riesling and Italy are two words that rarely find themselves in the same sentence.

It’s more likely to be requested by one gender, although men do occasionally ask for it as well. These gender norms are par for the course when serving wine in a restaurant. And while I try my hardest to never reinforce them, or cloud my judgment, I admit it does help move the process along, especially when I feel the glare of nearby tables waiting for my attention. I want to be impartial. And I want people to drink what they like, not what they think they should like.

“So you’re looking for something sweet?” I ask. An emphatic nod meets my question. Often, I already know this is the answer, but again, I’m not trying to rush to a conclusion. People, for all their predictability, can still surprise when you least expect it.

I respect them and their choices, not only for the sake of “providing exceptional customer service,” as is the language of every standard employee handbook, but because I understand that the discovery of a new wine or food is akin to a discovery of self.

It can be refreshing, like a new haircut or a new pair of shoes. For so long this person thought they only liked chardonnay, or perhaps hated chardonnay, but here they are, drinking something unexpected, liking it, and suddenly the story they told about themselves no longer seems set in stone and the world is full of possibilities. It feels like a sin to rob someone of that pleasure.

“Unfortunately, we don’t have a Riesling, but I recommend the Moscato if you’re looking for something sweet.” The interaction lasts one or two minutes, and then only a few more before they’re sitting with glass in hand. In this case, it is Moscato d’Asti, the most popular Muscat grape-based wine from the Asti region in Piedmont of Northern Italy, and from which the wine derives its name.

It’s nearly the opposite of everything I look for in a wine. The alcohol is low; half of what you’d find in almost any other wine, and can be cloyingly sweet. I’d like to think there is a Moscato d’Asti out there for me somewhere, waiting to change my mind. Every wine has its time and place, but when it comes to this one, I know that time and place is more restrictive and probably includes dessert.

While it’s not as familiar to people as the preferred Riesling, Moscato has entered the general lexicon. Inexpensive, well-known brands like Yellowtail and Barefoot brandish the name for as little as $7.99 on convenience store shelves across the country.

Celebrities like Drake and Lil’ Kim have helped to elevate the grape variety’s cache. On her 2005 song, “Lighters Up,” Kim says, “Still over in Brazil sipping Moscato/You must of forgot though/ So I’mma take you back to the block, yo.”

I’m not sure if Brazil has a big market for sweet, bubbly wines from Italy, but what’s clear is that Kim views drinking Moscato as a symbol of her success, showing how far she has come from humble beginnings, further demonstrating how ubiquitous Moscato has become, from cheap gas station swill to a decadent beverage of prestige.

Moscato d’Asti is not the only style of wine the Muscat grape is made in, but it’s the most popular. Like most grapes, it’ll go by different names according to the country, region, or style it is being produced in. By now, it has become a household name, one that is synonymous with other white grapes that make fruity, sweet wines such as Riesling.

One problem with that equivalence, however, is that Riesling is not always sweet. In fact, Alsace, one of the major wine producing regions in France, historically produces Riesling—and Muscat!—in a dry or off-dry style.

I feel a pang every time I recommend Moscato d’Asti in place of Riesling. While I know what they want is something sweet, it oversimplifies such a noble grape. I could go into a diatribe about how Riesling, in its various styles, produces some of the most beautiful wines anywhere in the world, many of which are dry.

But of course, I refrain. My job, ultimately, is to make someone feel comfortable sitting at a table with a wine list that seems designed to intimidate. They’re happy with their Moscato, and my job is finished.