The Eternal Recurrence of the McRib

The next McRib you eat could be your last. 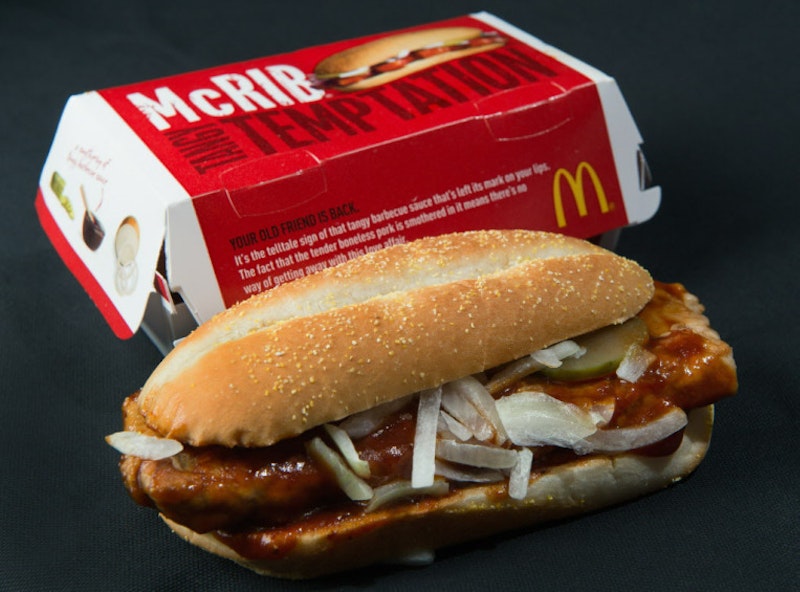 Alone among the commercial foodstuffs, the McRib sustains itself by reminding you of the presence of its absence. The Twinkie vanished temporarily due to an epic struggle between labor and management, and other beloved brands have faded into history, but the McRib continues to disappear and reappear with all the regularity of Santa Claus.

Its origins are no less mystifying: the McRib, which the inventor of the Chicken McNugget engineered to resemble a stack of ribs, has about as much in common with its porcine referent as ol’ St. Nick of Coca-Cola bottle fame has with the early Christian bishop who helped draft the Nicene Creed. Yet both Coke Santa and the McRib are emblematic of the United States, a magical place where inexpensive, insubstantial, and unforgettably tasty somethings are forged in a melting pot of half-remembered Eurocentric myths, state-of-the-art preservatives, and scraps of remaindered pork nothings.

The McRib is a novelty food the way Donald Trump is a novelty president. In each case, overconsumption leaves us mildly disgusted and hungry for more bites (sound bites, in Trump’s case). To eat a McRib is to be part of the joke, which is always on you. The Simpsons produced an amusing parody version of the sandwich, the Ribwich, but it was less funny by far than McDonald’s own “Save the McRib” advertising campaign—a company admitting its product was so mediocre that only the product’s inexplicable fandom could save it from extinction.

An American life lived to the fullest is a #YOLO life. The early Progressive historian Frederick Jackson Turner was wrong: our frontier never closed, because the illusion of space and the infinite possibility it represents has never vanished. So it is when the McRib, which weighs in at 500 fat-laden calories and a relatively meager 22g of protein, returns to store shelves (and ceaseless rumor has it this will be soon, if it’s not there already). People like me, who are forever #YOLOing it because we cannot live twice, will rush to purchase and consume 10-12 in a single sitting, consequences be damned.

There’s no good reason to eat the McRib. After all, even its ingredients remain up for debate. A few years ago, McDonald’s produced a video in which a skeptical, bowtie-wearing high school teacher toured a McRib production factory and became something of a believer, but others claim that the sandwich is comprised of the wretchedest materials native (and in some cases not) to this earth.

Then again, there’s no good reason to eat anything, save to ensure the continuation of one’s short existence. I can’t think of a single meal I’ve ever had—GMO or non-GMO, sans gluten or très gluten, organic or inorganic—that I haven’t instantly regretted. For that matter, I can’t think of a single decision that hasn’t haunted me for hours after I’ve made it. To Prufrock’s meaningless, impossible existential questions—”Shall I part my hair behind? Do I dare to eat a peach?”—one can add “Shouldn’t I buy a dozen McRibs? They’re seasonal, after all, and Time’s wingèd chariot is hurrying near.”

This, then, is perhaps the most important fact about the McRib: its run on store shelves ends the way life does, only faster and far more often. The McRib’s time with you, like the time spent with a beloved pet, is finite in duration. Hence the urgency and plausibility of McDonald’s “Save the McRib” campaign. Once it’s gone, what next? The McRib cannot be reproduced in one’s kitchen—no Twinkie or Oreo or McRib is truly DIY, because DIY versions of those mass-produced industrial foodstuffs would ipso facto not be those things—and so, after it has vanished, its like won’t be tasted again until the next round of its eternal recurrence.

Had we but world enough and time, abstaining from the McRib would be no crime. But ours is not such a perfect, timeless world. I must eat my fat-saturated McRibs while I can, because each one could, and perhaps will, be my last.