Exploring the last remains of an indoor mall in Baltimore City. 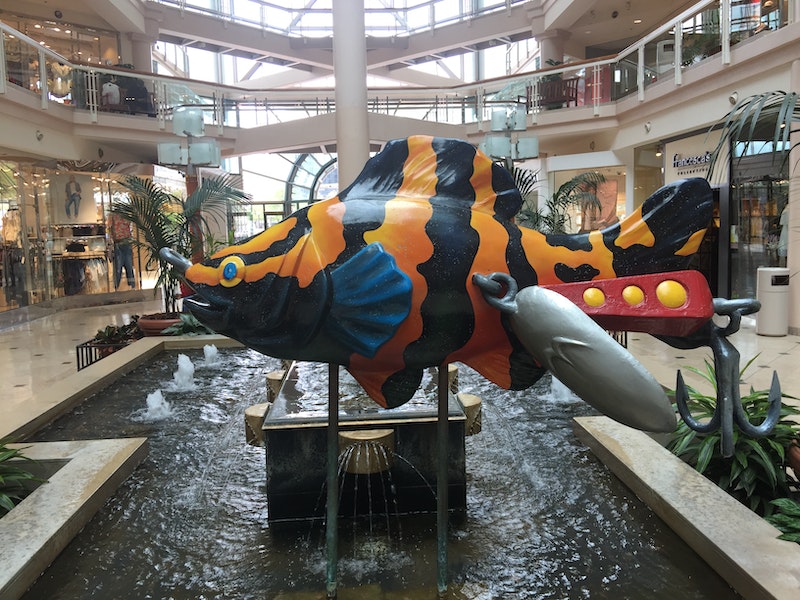 It’d been 18 months or so since I last visited Baltimore’s The Gallery at Harborplace, a late-1980s addition to this city’s Inner Harbor, and, as residents know, the once-ritzy indoor mall is now largely a ghost-structure. Hardly a bulletin given the downfall of malls (and retailers in general) across the country, but The Gallery’s almost complete dilapidation still elicited a faint murmur of surprise from my son Booker and me last Sunday. The only outlet that had more than a few customers—this was just after noon—was Starbucks, and even there, the unfathomably buoyant barista suggested that the outdoor Starbucks down a block on Pratt St. was a better choice.

(The picture above, taken last Sunday on the first floor, gives a shinier patina to the white elephant than the real thing.)
I don’t know when it happened, but the Gallery’s entire fourth floor has been shuttered, and, as this was once the “food court,” it’s a real mystery where employees at the smattering of shops, and office workers, take their lunch break. Could be that brown-bagging at the nail salons and knock-off clothes stores has had a resurgence. I lived in New York when The Gallery and its adjacent hotel, The Renaissance, opened and presumably drew large crowds, but even at the beginning of this century there was still a bounce at the mall.

Going back years, my two sons and I would take Saturday morning jaunts—admittedly far more exciting in Manhattan, though that’s changed too—and we’d alternate between Fells Point, the strip of shops on York Rd. in Towson (for a brief period, the long-vanished Borders had a terrific selection of British DVDS; it was there I discovered Inspector Morse, perhaps my favorite TV show in the last 25 years) and The Gallery.

Across the street, Harborplace—which as some may not remember, did galvanize the tourist trade in Baltimore, a brilliant collaboration between developer James Rouse and Mayor William Donald Schaefer—had already gone to seed, upscale restaurants and retailers, driven out by increased rent and diminished crowds, gave way to souvenir shops and cut-rate dollar stores.

But in 2005-09, the Gallery still sort of jumped, and we’d spend a half hour or so in the Suncoast/Sam Goody storefronts, and more often than not, make some purchases, which were cheap and perhaps not available on Amazon. The boys, young teenagers at that time, would then lobby for lunch, and chose between Sbarro’s Pizza, McDonald’s and a bunch of less generic joints. The lines were long—to my chagrin—and during the summer there were groups of kids on field trips who’d cut up and dance, sometimes incurring the wrath of security officers. (I didn’t see one uniformed official there last Sunday.)
There was a Brooks Brothers on the first floor—since re-located to, where else, Harbor East—and that’s where they’d get school clothes for the strict dress code at the Calvert School, where they both attended until high school. I may be off by a year, but it was in 2010 that Nicky picked out his first suit, probably for a prom at The Friends School. Socks, shorts, button-down shirts, jackets, drawers, it ran the gamut, and I’d buy turtlenecks for myself before they spoiled the shirts with a very prominent logo. Later, there was a Levi’s store for jeans, and the boys also picked up a lot t-shirts and sweatshirts at the Gap. For several years, my wife and I would buy gift certificates to Brooks Brothers for birthdays and Christmas—before they fully mapped out their personal clothing styles—and they’d spend the allotment within a week.

I haven’t a clue how the Renaissance Hotel is faring these days, given the glut of competitors downtown—badly is my guess—but not so many years ago when the Orioles were in town, their competitors would stay there. (Just as, before Waverly’s Memorial Stadium was abandoned for Camden Yards, ruining that neighborhood in the process, all the teams stayed at the Cross Keys Inn.) When the Yankees were in for a weekend, you’d see throngs of fans waiting in the lobby for a glimpse, or autograph, from Derek Jeter or even Jorge Posada.

I did exchange pleasantries with the Red Sox’s Kevin Youkilis one summer day (very good guy) in the hotel’s gift shop and a few years later, at the Starbucks, saw the Tigers’ Justin Verlander standing up and reading a newspaper. I’m not a star-fucker, but couldn’t resist saying hello, since he was Booker’s top pitcher in his fantasy league that year. I told the ace pitcher just that, and he grinned broadly, shook my hand, and said he hoped to continue on his run. I’m not certain, but I’d guess no MLB teams lodges at the Renaissance anymore, save perhaps budget-conscious clubs like the Tampa Bay Rays.

The boys are adults now, so our Saturday tradition is the stuff of near-nostalgia, but on occasion, when Booker’s visiting from Manhattan, we’ll take a spin to Fells Point. It’s mostly now just a chance to gab—sports, novels, history, economics and politics—but we’ll make the obligatory stop at Sound Garden, where I’m sorry to report, the inventory looks shrunk, and I hope the record/book/DVD outpost can somehow survive in the next couple of years and then maybe switch gears and become a marijuana dispensary, once it’s fully legal in Maryland.

Driving away in Booker’s jalopy, we saw that the Inner Harbor Barnes & Noble sign was still up, and he wondered how that beleaguered chain still had a presence downtown. “Who knows if it’s open,” I replied, recalling how the banner of the long-gone Baltimore Examiner remained on Pratt St. for years after its demise.