Hold the pickle? Not a chance, bub. 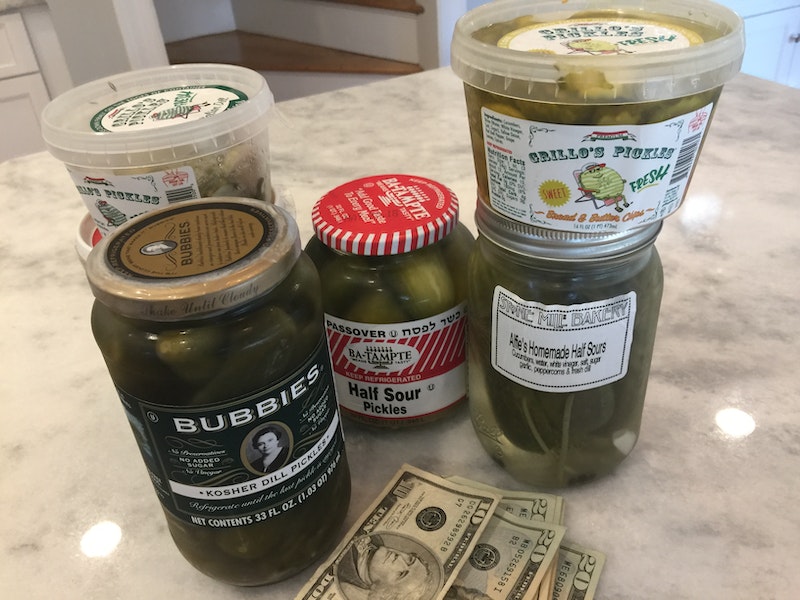 One fall afternoon in 1959, at four years old, I was “helping” my mom prepare dinner for our family of seven. She’d half-opened a can of asparagus (distracted by the phone), and doing a Greedy Gus, I stuck my hand inside to snag a few of the mealy vegetables, and wound up slicing my finger on the jagged metal lid. I didn’t say anything, but the blood on the floor betrayed my avarice and Mom, much to her consternation, dropped everything and took me to Huntington Hospital where I received four stitches. Didn’t mean beans to me, but the doghouse beckoned.

If I look hard enough at my hand today, nearly 60 years later, I think I can make out a faint scar, but then again, I’ve got about 50 or so such blemishes, so it’s hard to tell. In any case, I didn’t touch canned or frozen asparagus again, and it wasn’t until I was a young adult that I was introduced to the fresh variety. It was in the fall of 1973, and my college roommate, a Texan—his first trip to New York—and I visited my lifelong friend Elena Seibert and she took us to a Chinese restaurant (Szechuan had just taken over the city, replacing a lot of low mein joints), where she suggested the steamed asparagus, three-star spicy.

What’s this got to do with pickles? Not much, truthfully, except for the fact that I’ve been a pickle eater my entire life, never excising the slices from fast-food burgers like so many of friends. In fact, I’d usually take their scraps and fortify my own burger. Growing up, we ate a lot of pickles: the refrigerator was filled with numerous jars, some so ancient that the dills grew mold, which is really something. One treat I especially favored was the “fancy” appetizers Mom would make: a slice of baloney, slathered with cream cheese and wrapped around a pickle spear. That, considering her limited culinary repertoire, was living high on the hog. Less successful, at least to my brothers, were the baloney/peanut butter/Velveeta hors d’doeuvres, but I liked those as well.

One pickle revelation came when I was 10 or so at Bobby Ringler’s house on Strawberry Lane in Huntington. We’d been playing dodgeball (which wasn’t illegal then) or tossing around the pigskin in the morning, and for lunch Mrs. Ringler made tuna sandwiches. What was different here was that “Glo,” as she was called when I was older, diced cucumbers and kosher dills and added them to the tuna salad. I hadn’t heard of the restaurant then, but it was like dining at The Quilted Giraffe.

Are pickles an acquired taste like, say, caviar, anchovies or Stilton cheese? I don’t think so: as with mustard, you either like them or not. One my nephews harbors a vehement distaste for both mustard and ketchup, and when eating a hot dog or burger, plain, says he doesn’t want any foreign element to mar the pure essence of the dog or beef. That’s an eye-roller, but we all have food quirks, such as my disdain for beets and lima beans, although I don’t think it’s on the same level. My younger son Booker won’t touch anything with a whiff of pickle, and his palate is by no means limited. At seven, he promised to write a book called No Pickles, No Onions. The boys were tots in the 1990s, and when my wife and I committed the verging-on-bad-parenting sin by going to a Burger King in Lower Manhattan, Booker, unlike his brother, was scrupulous about the throwback “Hold the pickles, hold the lettuce” jingle, and if a mistake was made, which happened frequently, there was no coaxing him into just removing the offending condiment instead of waiting for the correct order. Drove me batty.

One time at New York Press, I was reading an L.A. Weekly story about a fellow who struggled with alcoholism, and he had this great line: “Once you’re a pickle, you can never become a cucumber again.” That cracked me up, as well as my colleague and longtime friend Phyllis Orrick, and from that day on, we’d size up people interviewing for jobs at the paper, or just strangers in a bar, and ask, “Think he/she is a pickle?”

It’s been a few years now, but one of the staples at Baltimore’s Charles Theatre was a retro concession stand ad (this isn’t the exact one, but you get the drift) that showed happy customers lining up to buy 15-cent pickles, wrapped in a small paper bag. I loved that spot—even more than the ever-popular bit with a much-younger John Waters blowing smoke rings—and every time I saw it, it just blew my mind that pickles were once a marketable treat at a movie. My aforementioned opinion notwithstanding, it’s hard to imagine people getting all messy with pickle juice dripping down their chins.

I’m a lucky dog these days since my wife is also an enthusiastic pickle-eater. Our refrigerator is filled with dills, half-hours, bread & butters, and some fancy ones (hard to avoid) augmented by spices. And let’s not forget the oft-ridiculed gherkins, a snappy pickle that’s perfect in a salad. Or just as a snack when feeling peckish.