Savoir-Faire in the Sky

Experiencing air travel across the decades. 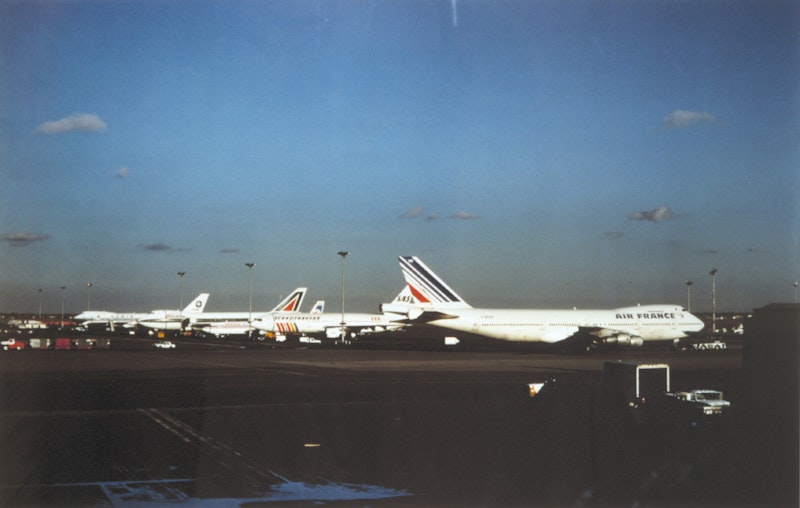 Air travel’s glamorous heyday of the 1960s, focus of much nostalgia, ended before I ever flew. My first flight was probably to Florida in the early-1970s. A few years later, still in elementary school, I flew to Guatemala and Mexico for a family vacation built around one of my father’s bean-business trips. There was a nauseating patch of turbulence on the night flight to Guatemala City, and a beautiful vista of cloud-wreathed volcanoes the morning we flew to Mexico City.

In my early-teens, I flew alone for the first time, heading to Puerto Rico in the late-1970s to visit close friends among my father’s bean-wholesaler customers. In 1980, after getting my first U.S. passport in a Rockefeller Center office behind the statue of a globe-hoisting Atlas, I flew to Paris to visit my sister, who’d moved there; my father and uncle were flying a day later. As the sun rose over Europe, I lifted my window shade to see it, annoying the awakened French guy in the next seat.

Air France long seemed to maintain some of air travel’s old joie de vivre. On a trip in the 1990s, the in-flight magazine had a photo of a man and woman from a production of The Taming of the Shrew. He had a stern expression and hand ready to spank, while she lay across his lap with the exuberance of someone well-versed in the art of the publicity photo. In those pre–Fifty Shades days, seeing this in an airline magazine was a sign you’re on Air France.

I’ve flown on some obscure airlines. During visits to Nepal, I took Everest-sightseeing flights on both Buddha Air and Yeti Air. Each offered spectacular views, including through the cockpit windows, and Yeti had the added amenity of champagne to celebrate sighting the mountain. These flights take you on a circle near Everest but not fully around it, to avoid China’s airspace.

In the 1980s, on a trip to Venezuela with my father, we drove to the city of Barquisimeto with a couple of businessmen, then flew back to Caracas by ourselves. There was some problem getting our seat assignments, so my father held out our travel documents with a rubber band holding some cash, which the ticket agent readily accepted. I was impressed by my dad’s savoir-faire. This Venezuelan airline was called Aeropostale, and when I later saw the clothing store Aéropostale in New York, I thought it was the same company, which was a stupid belief.

In the Virgin Islands, long ago, I flew on a small propellor-plane that had windows that opened; I couldn’t tell you what that airline was called or if it really was an “airline.”

Only once have I been on a helicopter, a ride for which I can thank Donald Trump. Around 1989, I was working at Bank Systems & Technology magazine and sometimes traveled around the country to interview bankers. To get to one meeting, I took the Trump Shuttle, an airline that existed for a few years, to Boston, intending to then take a taxi into the suburbs. But a poster in the terminal, with a familiar face, said that Trump Shuttle passengers could get a free helicopter ride to any of several Boston-area towns, one of which (I don’t recall the town) was my destination. I took up the offer, happy at the novel experience and to save a few bucks for my company. Then, after I got out and watched the helicopter fly away, I looked around.

I was on the edge of some large, inactive construction site, with no sign of a town center or any public transportation. This was before cell phones, so there was no obvious way to determine my location or figure out how to get to the banker’s office. Fortunately, a guy happened to walk by toward a parked car, and when I asked for advice, he gave me a ride. Decades later, when Trump ran for president, my memory of his helicopter-to-nowhere helped propel my distrust.