Autonomous Cars are coming and there’s nothing we can do to stop them. 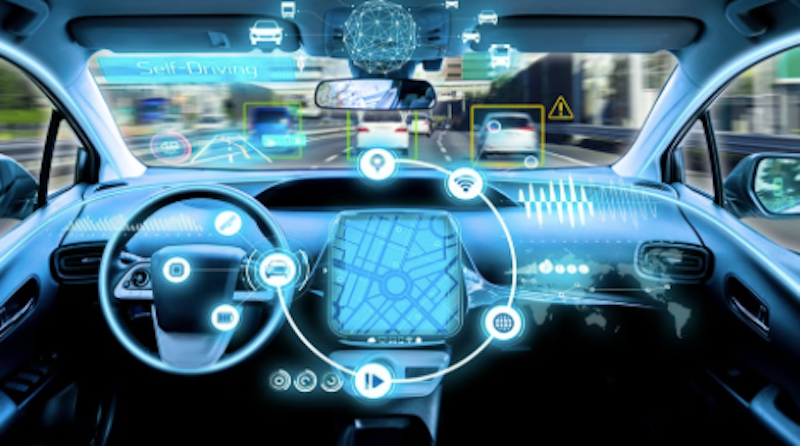 You reach for your iPhone to summon a ride. Two minutes later, a van arrives, without a driver. The side panel opens automatically and you step inside. You’re greeted by a friendly female voice. “Good afternoon, this driverless car is yours. Your destination is 1400 Larimer Street in downtown Denver. Please make sure your seat belt is fastened. If you have questions, press the Help button to speak with a rider support agent.”

You sit back and check your phone. You look at emails and Facebook. You sense cars driving on either side of you, but your attention isn’t on the road. The drive’s smooth and steady. Even when the van merges onto the freeway, you feel safe. Then you notice something odd. The video screen behind the front seat goes black. The van picks up speed and a distorted male voice comes over the speakers.

“This vehicle has been commandeered. You have 10 minutes to transfer three Bitcoin to the bank account referenced on the video screen in front of you. If you do not follow instructions, this vehicle will crash.”

Though the van’s on the freeway, you attempt to open the passenger doors. They’re locked. You try lowering the windows. Nothing happens. You push the button for the support agent. No response. The video screen flashes an account number for an online bank. You call 911 but you’re put on hold. The vehicle increases speed to 80 mph, weaving between lanes. The distorted voice begins a countdown. “Nine minutes… eight minutes, 59 seconds… eight minutes, 58 seconds…”

You panic. You call a friend who’s a tech expert. He tells you he’s heard about these situations overseas. He advises you to do as they say or you might die. You conclude you have no choice. Your friend directs you to a Bitcoin exchange. You take a deep breath, access your savings account and click. You stare at your phone in horror as $100,000 is transferred to an unknown bank account. The van starts to slow and change lanes. The vehicle exits the freeway and pulls in front of a liquor store. The passenger door opens. You leap out and fall to the sidewalk, sobbing.

The above scenario plays like something from Black Mirror, but this nightmare may soon be upon us. Autonomous Cars are coming and there’s nothing we can do to stop them. Waymo, Google’s self-driving car, is currently available in Phoenix where the company offers free rides to the public in autonomous vans.

Early passenger reviews have been less than enthusiastic. Complaints include slow driving, abrupt braking and poor execution of left-hand turns. On the plus side, safety results have been encouraging. In 65,000 miles of real-world autonomous driving, Waymo vehicles were involved in 18 crashes. Most of the accidents involved other drivers rear-ending or side-swiping Waymo. None of the accidents were life threatening.

Autonomous car advocates point to the unreliability of human drivers. People are prone to texting, road rage, speeding, driving while intoxicated and poor decision-making. Waymo eliminates this variable. Waymo vehicles have 29 cameras and multiple sensors. Software is designed to be cautious around pedestrians. If someone takes a half-step off the sidewalk, Waymo will come to a halt. Waymo vehicles obey the speed limit and are programmed to follow all driving ordinances.

The unknown threat to autonomous cars involves hacking and ransomware. Since autonomous vehicles are dependent on a wireless connection to the outside world, they are vulnerable. Cybercriminals and terrorists will undoubtedly target the car’s software and electronics. Hackers will attempt to gain access to the vehicle through spoofing or they will try to blind or jam the sensors to make the car inoperable.

In 2015, Wired wrote about hackers gaining access to Jeep Cherokees via the car’s entertainment system. They were able to control steering, brakes, acceleration, transmission and dashboard functions. In May of this year, Security Week.com reported on two researchers hacking a Tesla through a remote drone attack. They were able to open car doors, change seat positions, play music, turn on air conditioning and alter steering and acceleration systems. They weren’t able to gain control of the vehicle’s driving mode.

Cyber incidents are a threat to the future of autonomous vehicles. With cars becoming more like smartphones every day, ransomware attacks are inevitable. Adequate security coding procedures are impossible without real world data. This means autonomous car passengers will all be guinea pigs.

In 2017, a passenger in a Tesla autonomous car died when his car slammed into a concrete barrier. At the time, the car was on autopilot while the driver was playing a video game on his iPhone. The driver trusted the autopilot to properly navigate the vehicle. The National Highway Traffic Safety Administration has opened a safety probe into 12 crashes of Tesla vehicles using autopilot resulting in 17 injuries and one death.

Behind the risk and uncertainty of autonomous vehicles is an obvious question. Why do we need autonomous cars? Proponents claim self-driving cars will reduce accidents, increase traffic efficiency, save billions in accident-related costs and contribute to environmental sustainability.

The downside is ominous. A small hack in the autonomous driving network could cause multiple collisions and citywide gridlock. Self-driving cars will cause millions of people to lose their jobs and destroy industries like trucking, delivery services and bus drivers. Hackers will access privacy data stored on autonomous vehicles. And the initial cost of autonomous cars will be astronomical. (In an interview with the German publication Manager Magazine, Former Waymo CEO John Crafcik estimated the cost between $130,000-$150,000.)

Silicon Valley futurists claim autonomous vehicles will make our world more efficient and we should not fear technology. They’re right. It’s not the technology we should fear but the unknown motivations behind their plans.Ultimately it comes down to a choice. Do we want to drive with angry, distracted drunks or unknown malevolent hackers? Only one of these options yields human accountability. I hope that still means something.