Slaughter-free meat is here, and now is the time to switch. 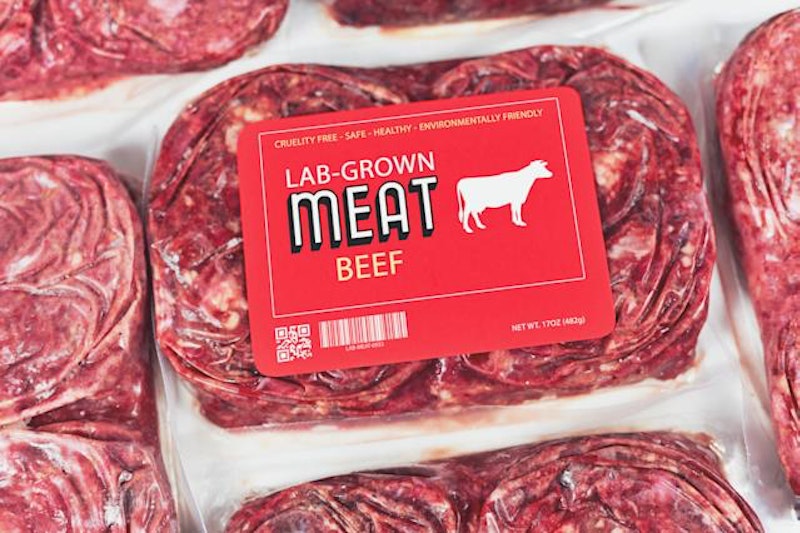 One of my favorite TV shows of recent years is Amazon Prime's Upload, a series created by The Office showrunner, Greg Daniels. Starring Robbie Amell and Andy Allo, it features a mix of comedy, romance and science fiction. Some of the science-fiction elements, however, are less fanciful than others.

For instance, in one scene, a father, played by Chris Williams, makes slaughter-free meat for his daughter, who’s portrayed by Allo. "I'm printing a Jamie Oliver steak design he tweeted this morning," Williams says. It's not the most sympathetic portrayal of the technology, but the basic idea already exists in the real world. Cultured meat is grown from cells, without raising and slaughtering livestock. It's been granted regulatory approval in Singapore and is available for home delivery. An Israeli company has reduced production costs for a quarter-pound of cultivated chicken to less than $4.

Cellular agriculture has many advantages over slaughtered meat. It's better for animal welfare, the environment and public health. Members of Congress should support federal funding for cultured-meat research. This will help address ongoing challenges, such as reaching price parity.

We kill over a trillion aquatic and land animals every year for food. According to the Population Reference Bureau, only about 117 billion humans have ever lived. So the suffering we inflict on animals dwarfs any human atrocity or injustice. There are few things the late conservative writer Charles Krauthammer and I agreed on. But he was perceptive when it came to our relationship with other species: "I’m convinced that our great-grandchildren will find it difficult to believe that we actually raised, herded, and slaughtered [animals] on an industrial scale."

Cultured meat requires no agriculture waste into rivers and oceans, since it's produced in a closed system. Further, the land, fresh water, and greenhouse-gas emissions necessary to make cultured meat are a tiny fraction of those necessary to raise livestock. "Industrial livestock agriculture—raising cows, pigs and chickens—generates as much greenhouse gas emissions as all cars, trucks and automobiles combined," Greenpeace USA states. "Cattle ranchers have clear cut millions of acres of forests for grazing pastures, inhibiting the landscape’s ability to absorb carbon from the atmosphere."

I'm excited for season two of Upload. Like so much else, filming was delayed by COVID-19. While there’s no publicly available release date, new episodes should be coming soon. The first season ended on a cliffhanger, so there better be. At the risk of sounding overly earnest, I'm more excited about the arrival of cultured meat. It's not science fiction. We can create a food system that isn't cruel to animals, that doesn't accelerate climate change or raise our pandemic risk. I hope legislators will help make this happen by funding open-access research into cellular agriculture.