I knew the switchboard and the Telex machine. 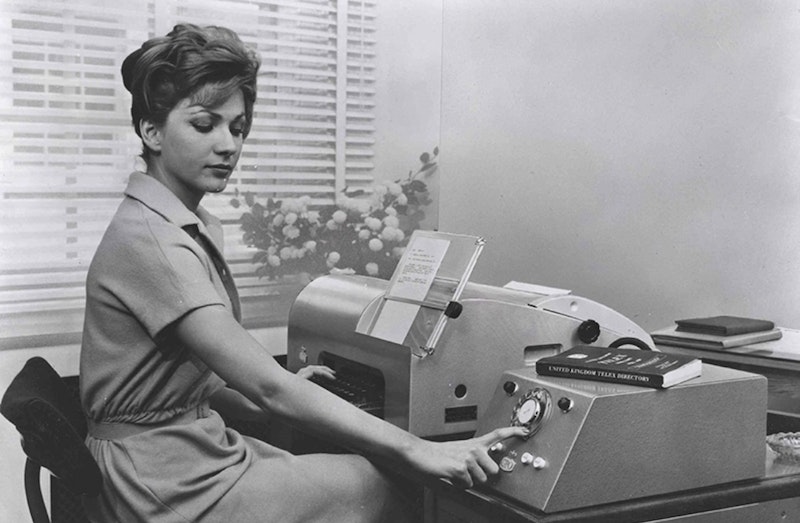 It’s hard to convey to younger people that information was radically different not so long ago; that the technologies that transmitted, collected and processed it in the late-20th-century now belong to an archaic era, though they remain in living memory.

When I was in high school in the early-1980s, I worked occasionally at the import-export firm where my father was a principal, which had upwards of 20 employees. They were trading beans and other legumes around the world, and a separate department handled frozen seafood. The company had an old-fashioned telephone switchboard, and my first job was to operate it while the regular operator/receptionist was away. Incoming and outgoing calls alike were carried on cords that I’d plug into holes.

My first day was marked by incompetence. A buzzing sound went off, indicating a call was over, and I hastily pulled out multiple cords at once. “Hello? Hello?” I could hear people saying in rooms scattered throughout the office. I also soon discovered that you could get an electric shock if you grabbed a cord too near its end. My hand would fly back with a burning sensation, but the voltage must’ve been too low for serious injury.

Before long, the firm got a new phone system, with the switching now handled by internal electronics. It was made or sold by a company called Jackson, and my father was disgruntled about some glitches or limits of the new phones. One day when I wasn’t present, my father was told someone from Jackson was in the office, and he rushed over to make his views known. “Jackson!” he railed at them. “Your system sucks!” It turned out the rep was there with prospective customers to show how well the system worked for an existing client.

The room with the switchboard also had two or three Telex machines. These were stand-alone devices with a keyboard, a roll of paper and a spool of yellow tape that would get punched with holes to encode the text that was being typed. You could communicate with other companies that also had Telex machines on a global network that would become obsolete before the end of the century, replaced initially by faxes and then emails. As with phone calls, telexes sometimes had to be expedited by an operator. I recall once pressing a key repeatedly to express irritation at an unseen operator and getting the same annoyed tapping in response.

Information was more elusive back then. When I was in college, a roommate loaned me two of Ayn Rand’s essay books from the 1960s. I read them with great interest, but it was only after repeated visits to NYU’s vast Elmer Holmes Bobst Library that I pieced together some context about her life and the Objectivist movement she’d founded, including her break with William F. Buckley and the fact that she’d died in 1982. I had to dig up this info, in stacks and microfiches.

Another example: In 1994, I called a consultant named Peter Glaser for an article I was writing on space technology; I’d seen his name in The New York Times. He spoke to me about developing satellites that would collect solar energy and beam it to Earth. I wondered if he was joking—or crazy. In fact, it was a real concept (albeit futuristic then and now), and Glaser was its top proponent. With Wikipedia, it’d be hard to be so clueless going into an interview; but it was a year later before I’d access the nascent Web for the first time, through the then up-and-coming company America Online.

You can never be too sure where technology is headed, or how fast. When Glaser was first touting his solar-power satellites, in the late-1960s and early-1970s, that idea fit neatly into a broader optimism about human settlements in space; the workers who assembled the solar arrays would live up there, in orbiting suburban tubes. Another visionary, Jacques Cousteau, imagined underwater cities. Few futurists anticipated how information, far more than transportation or energy, would define tech in the early-21st century.

The exponentially greater speed and capacity of info tech today, compared to the late-20th century, causes its own problems. Whereas info then was sketchy and slow, now it’s fast and abundant, straining human beings’ capacity to make sense of it. Plus, the technologies that convey and compile info have become more habit-forming, by design. There were a few teletype hobbyists, like their better-known ham-radio cousins, but there weren’t many people addicted to the Telex machine, believing whatever conspiracy theories it spat out.